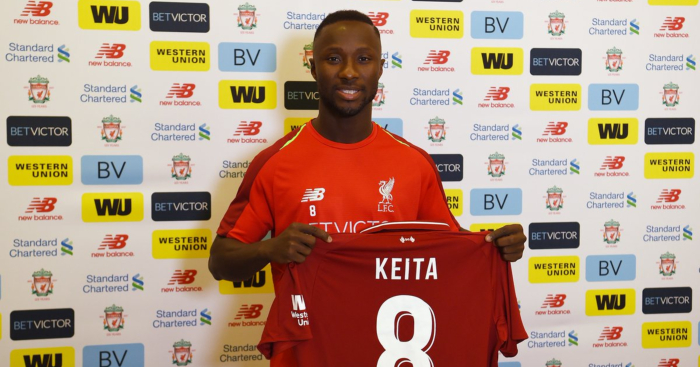 Naby Keita has some big shoes to fill at Liverpool, and he will be hoping to replicate how certain Arsenal and Manchester United players fared after inheriting iconic squad numbers.

Liverpool have announced that Keita will become the first player to wear the No.8 shirt since Steven Gerrard vacated it in 2015.

We’ve looked back at the good, the bad and the ugly instances of symbolic numbers being either sullied or lived up to.

It’s hard not to feel a little bit sorry for Walcott, whose legacy as a footballer could have been so different were it not for a number of crucial moments going against him.

As a teenager yet to make a Premier League appearance, he did not need the pressure of going to the 2006 World Cup only to be left unused, and he could probably have done without the scrutiny of becoming the first man to inherit Henry’s No.14 shirt at a time when he had scored a grand total of four top-flight goals.

Pierre-Emerick Aubameyang may be more suited to such a goalscoring burden now he has taken on the shirt number.

Manchester United did in fact consider retiring Giggs’ No.11 shirt after his 24-year playing career at Old Trafford, but it was at the Welshman’s insistence and encouragement that it was instead handed to Januzaj, who had been one of the few positives of David Moyes’ season in charge.

His involvement in the Red Devils’ first team decreased under Louis Van Gaal, however, and, after two loan spells away, the Belgian left the club permanently for Real Sociedad in 2017.

Anthony Martial fared better in the shirt, but his United future is now also in doubt.

“Top players have worn it before and I was No10 with Boca [Juniors] before, and [Diego] Maradona played in it too, so the great responsibility is now that I’m going to play in this great club so certainly the greatest challenge is to do my best.

“Obviously I didn’t want to forget Del Piero who was the last player to wear No10. He is a person and player that I greatly respect and who certainly represents an emblem and symbol of esteem.”

Fifty goals in two seasons wasn’t a bad return for Tevez, and Paul Pogba and Paulo Dybala have carried on the proud tradition.

The perfect instance of the master passing on the baton to the apprentice. Vieira had been the lynchpin of Arsenal’s midfield during the first nine years of Arsene Wenger’s reign as manager, and a few eyebrows were raised when he departed for Juventus, with a young Fabregas expected to fill his shoes.

Fabregas swiftly silenced any doubters. While he may have lacked the physical presence of his predecessor, his technical ability more than made up for that.

When the two players met in the quarter-finals of the Champions League in 2006, the Daily Telegraph gushed: “Arsenal’s Cesc Fabregas had just turned hope into reality by totally eclipsing Patrick Vieira, the man wholly responsible for setting new midfield standards in this neck of the woods.”

Such was the distinction with which Aldair served Roma between 1990 and 2003, the club first consulted the Brazilian to decide whether Strootman would be allowed to wear the No.6 shirt which until then had been retired.

“I was pleased that my number six jersey was withdrawn in the past 10 years which was nice, but I think it is also nice to it back in the field especially for the younger kids who will not have seen it,” he said.

“I hope the fans are happy with what I did, just for the shirt and it will be a pleasure to see that number again especially because Roma have had many other great champions like Bruno Conti, Falcao and Cerezo who have not had their jerseys withdrawn.”

Strootman thanked the former defender: “I know he was one of the best players ever to play for Roma. It’s an extremely tall order to emulate what he achieved at this club and I hope the fans will give me all the support I need.”

Bergkamp encapsulated everything that was great about Wenger’s early Arsenal sides; a hideously gifted player, capable of producing moments of sublime brilliance, and also a bit of a hard bastard too.

Regardless of his performances for the club, Gallas wearing No.10 for Arsenal as a defender just makes us incredibly angry. 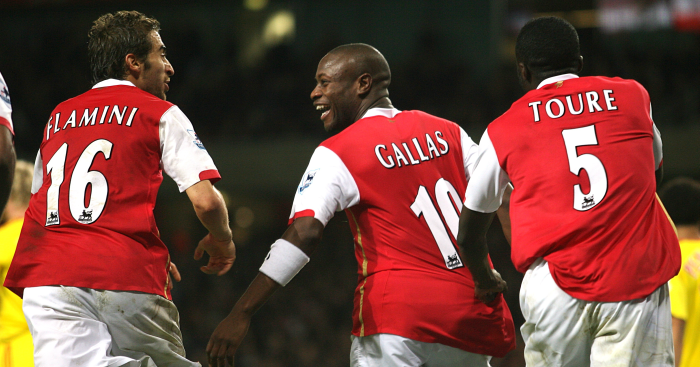 Think of Ronaldo and what comes to mind? Sure, there’s that abomination of a haircut, but then there are the goals, the dribbles, the hat-tricks at Old Tafford, the elasticos, the World Cup winners…

Think of Roberto Soldado and what comes to mind? That time he tried to kick the ball into the crowd at his Villarreal unveiling and leathered it over the stand.

Yet, remarkably, Soldado was Real Madrid’s next No.9 after Ronaldo.

FAIL: Roberto Soldado trying to hit the ball into the crowd during his Villarreal unveiling. pic.twitter.com/20ij9MKr3t

Explaining why he wore the No.21 throughout the vast majority of his career, Pirlo wrote in his autobiography: “My dad was born on the 21st. It’s also the day I got married and made my debut in Serie A.

“It became my shirt number early on and I’ve never let it go.”

Having worn the number with distinction for a decade at Milan, who are often quite protective of squad numbers having retired the No.6 and No.3, it seemed a little remiss for the club to then hand it over to loanee Maxi Lopez, who went on to score twice in 11 appearances – albeit including this belter against Pirlo’s Juventus.

We liked Martins. He may have been part of the Newcastle side that was relegated, but he was a good laugh, wasn’t he?

You can’t replace a man who celebrated every goal with a repressed arm in the air with a man who pulled out a backflip, though.

Never mind its origins with George Best and Bryan Robson, for the first 17 years of the Premier League, United’s No.7 shirt was truly iconic. First adorned by Eric Cantona, it remained the Red Devils’ most famous shirt thanks to the exploits of David Beckham and Cristiano Ronaldo.

Three years with Michael Owen may not have hit those heights, but it still contained some famous moments; namely that winner in the Manchester derby.

And its history weighed heavily on the shoulders of Antonio Valencia, who asked to switch back to No.25 after only one season in which he struggled to cope with the pressure, scoring just once.

Given Angel Di Maria and Memphis Depay’s subsequent difficulties in the shirt, Alexis Sanchez has a big job on his hands to return it to its proud history.