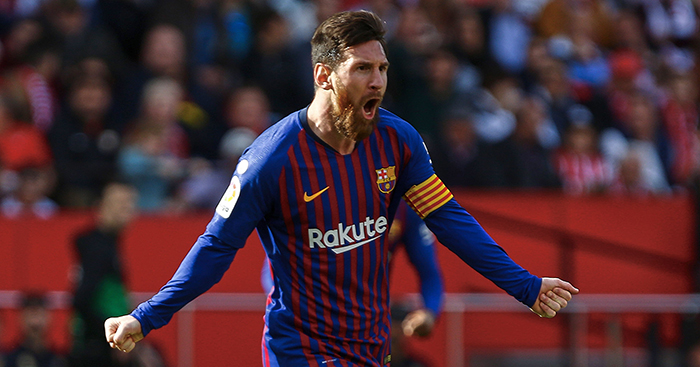 We all have our opinions on who the best players in the world are – but who would Football Manager pick in an all-star XI?

The Football Manager series has built such a strong reputation for its accurate player attributes and its scouting network that many clubs around Europe use its database to assist in their search for recruits.

The database is widely used to uncover the next generation of “wonderkids”, but Football Manager gets significantly less attention for its interpretation of current stars: does the game accurately reflect the quality of those players who have already made it at the highest level?

Each new release of the game sparks fierce debate among football fans regarding the attributes given to their favourite players, so we decided to take a look at the highest rated players on Football Manager 2019 and build a World XI – to find out who Football Manager believes are the world’s best players in their respective positions.

After sorting the players in order based on their ‘current ability’ score in the FM19 editor, we decided to use a formation – 3-5-2 – that crowbarred in as many of the highest rated players as possible.

With a ‘current ability’ level of 186 and ‘potential ability’ of 192, oddly 32-year-old Manuel Neuer still has room to improve according to the Sports Interactive team.

Some of his best-hidden attributes include handling pressure (20), important matches (19), and temperament (19). It goes without saying Neuer is a born leader. 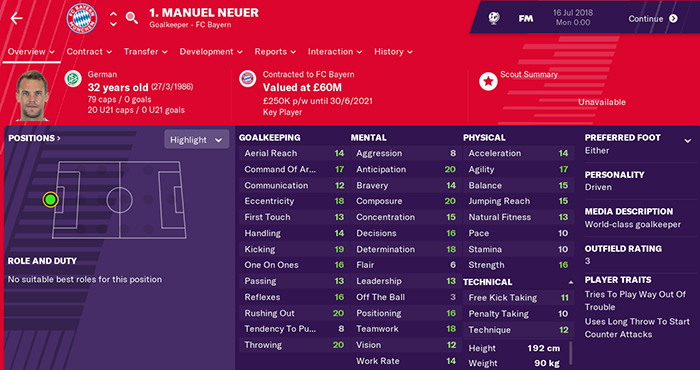 The highest rated centre-back in the game is Real Madrid’s Sergio Ramos, whose technical ability tips him into a category dominated by attackers.

His ‘current ability’ is 177, and in terms of hidden stats he boasts versatility (14), injury proneness (7), and important matches (2 0)but has poor sportsmanship (6) and temperament (7). That sounds fair. 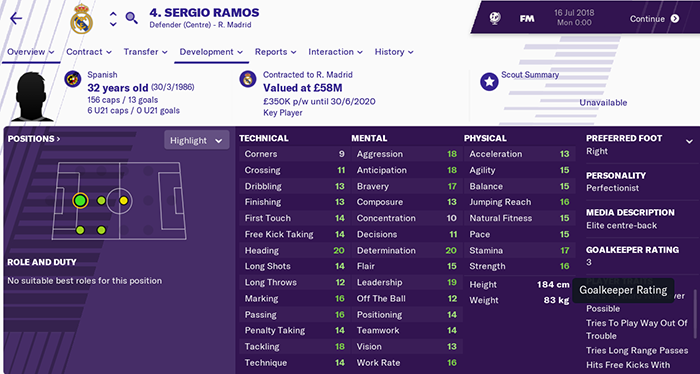 Most would now agree that Liverpool’s Virgil van Dijk is one of the world’s best players, but that wasn’t necessarily the case back in October 2018 when Football Manager 2019 was released.

SI were slightly ahead of the curve on this one, then, giving Van Dijk an overall ability level of 175, plus strong consistency (17) and important matches (16) stats. 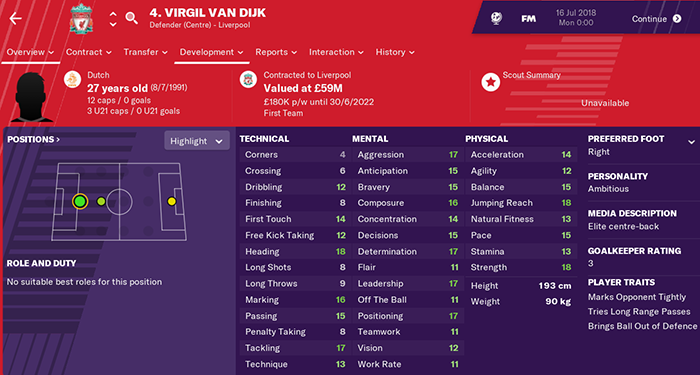 This one’s a bit of a surprise and, at 171 overall, Chiellini might be a little overrated – riding high on the list thanks to past in-game glories.

Chiellini was a superstar on Football Manager long before he rose to prominence in Italy, and he remains high on the list due to his ludicrous defensive attributes including marking (18) tackling (19) and strength (18). 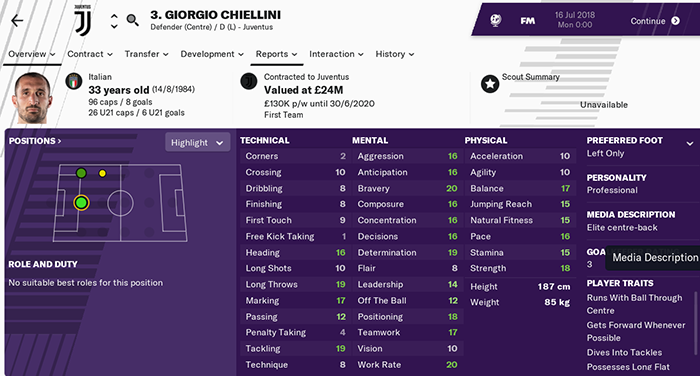 Rated at 186, the sixth best player on FM19 is Man City’s talismanic, missing-in-action playmaker Kevin De Bruyne. It’s easy to forget just how incredible the Belgian is when on top form because injuries have made him such a peripheral player this campaign.

His injury proneness stat (12) might need updating, but surely nobody could quibble with De Bruyne appearing on this list. 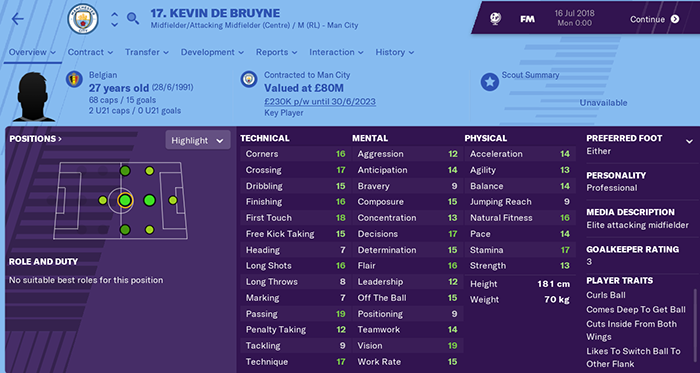 A slightly more surprising pick is City’s David Silva, whose inclusion as one of the game’s top three midfielders perhaps speaks to Football Manager’s English bias – or at least to a bias towards attack-minded players.

We absolutely love Silva, but attributes including right foot (13), dribbling (18), and pace (13) may raise an eyebrow or two. 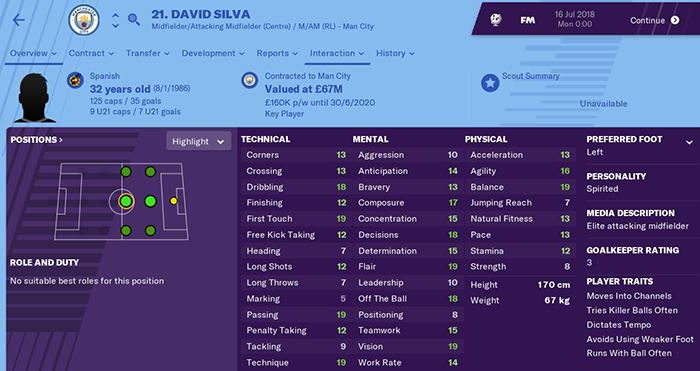 Paul Pogba did not make the cut, but the man who pipped him to the World Cup Golden Ball sneaks in as one of just three players based in La Liga to make the list.

Luka Modric has some phenomenal hidden stats to go along with his obvious technical ability, including pressure (17), professionalism (17), and temperament (17). 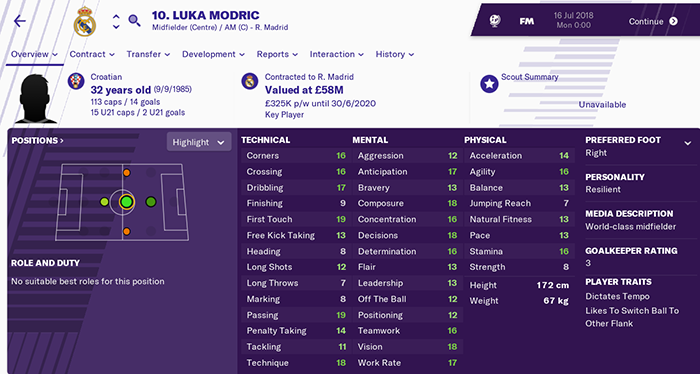 The joint best player in the game, with an ability of 195, is Lionel Messi… which we don’t think is high enough. Any metric should surely give Messi full marks: is it realistic to assume a future footballer will be 2.5% better than the Argentine?

Our suggestion to bump that figure up would be to boost his professionalism (16), temperament (14), crossing (15) and composure (18). 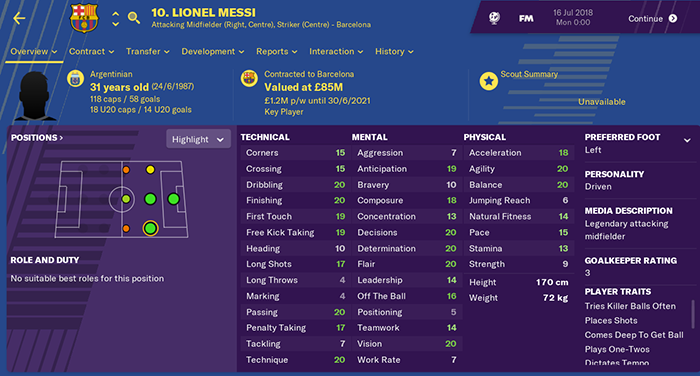 Officially the third best player on the game, Neymar is 189 overall but has a potential of 195, meaning that at 26 years old he can still grow to be as good as Messi or Ronaldo. 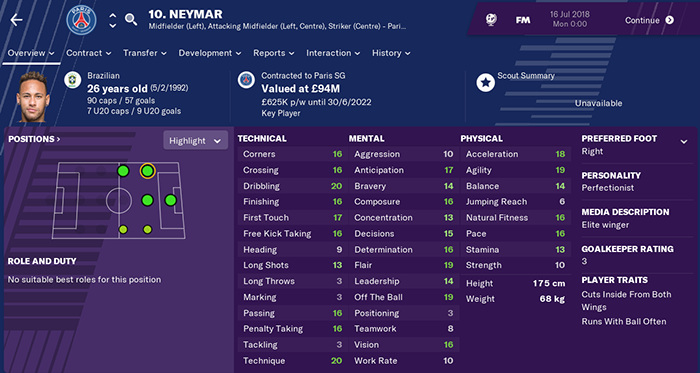 The other player on 195 is, of course, Juventus’s Cristiano Ronaldo. 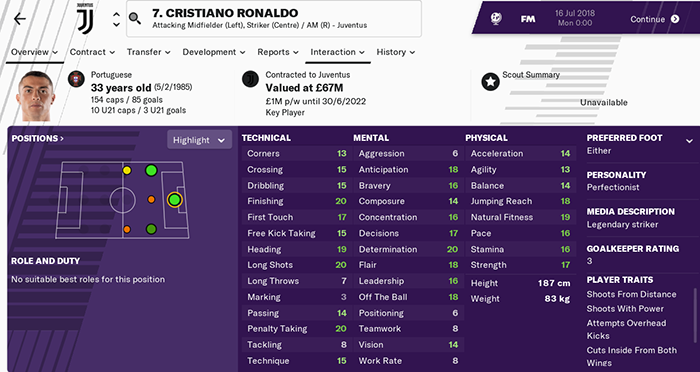 The only Englishman on the list is Tottenham Hotspur’s Harry Kane, the best out-and-out goalscorer on the game whose mix of work rate (18) and finishing (19) puts him in the top five overall. 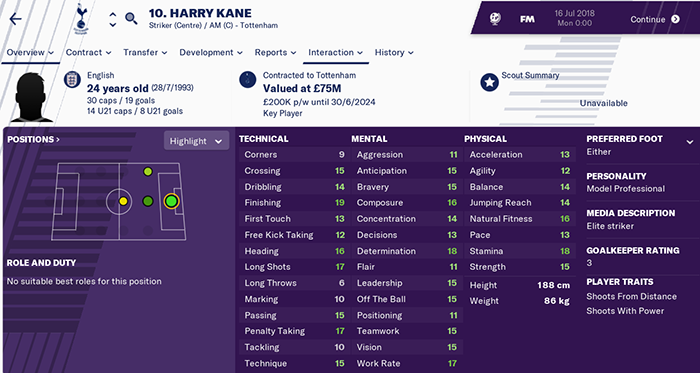 The top five wonderkids to sign, clubs to manage and tactical tips for FM19