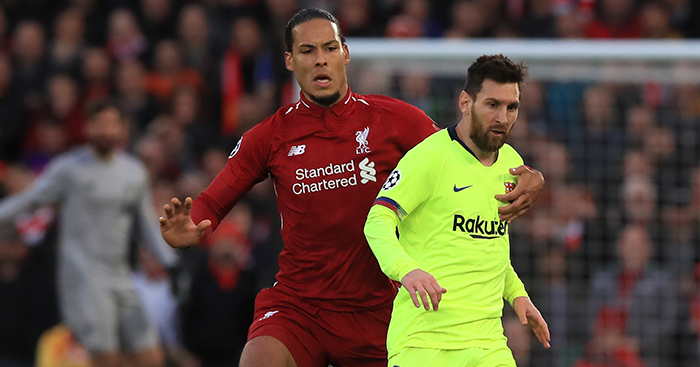 Plenty of people put a lot of stock into Football Manager’s ratings – and this is how a World XI would look according to the stats on the latest version of the game.

Using the current ability (CA) and potential ability (PA) figures for every player on the game, we put together the best players on FM20 in an admittedly ridiculous 4-2-4 formation. The Premier League has the most members, with four, but there is a fairly even spread between the top five leagues around Europe.

Here’s the 11, beginning with a legendary keeper still going strong at the top…

Bayern Munich’s 33-year-old is still the best No.1 in the world according to Sports Interactive, who shun the trendier Premier League picks of Ederson or Allison in favour of the Germany legend.

His goalkeeping stats are pretty close to perfect, with rushing out (20) and teamwork (18) stats highlighting why Neuer remains the archetypal sweeper-keeper. Prising him from Bayern is impossible, but we can still admire him from afar…

Liverpool fans will be delighted to see their young right-back already the best player on the game in his position, and TAA only gets better over the first two or three seasons. He is pretty much the perfect player, easy to retrain as a midfielder or winger but ideal as he is – a complete right-back with no discernible flaws.

At the beginning of the game it’s mostly 13s and 14s, but for a right-back that’s very strong; being an all-rounder is more important than green figures in a select few areas. More importantly, the majority of these become 15s and 16s before long. 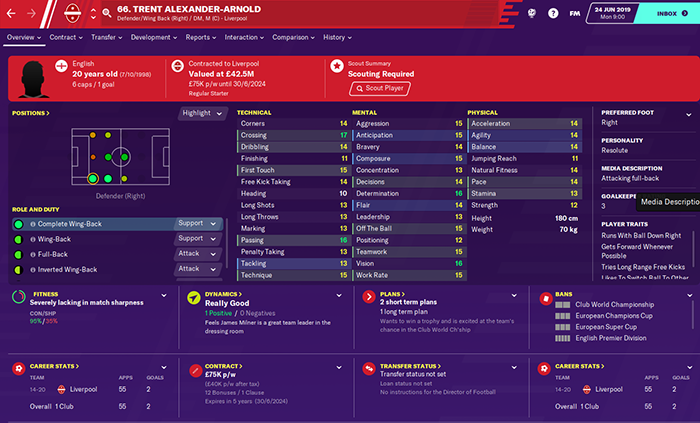 The man who so nearly won the Ballon d’Or, and who won the Premier League’s highest individual honour last season, is unsurprisingly the best defender in FM20. Van Dijk has a host of 18s and 19s in classic centre-back areas, including heading, tackling, marking and positioning.

Van Dijk is as unbeatable in the game as in real life, and at 27 has another four or five years at this level. Like most people on this list, signing Van Dijk just isn’t possible – but start as Liverpool and the defence sorts itself out.

One of two surprise inclusions from Real Madrid is another legendary footballer many assume has gone past his peak. But starting as Real and restoring them to the best team in Europe is a very easy task for gamers this year. Ramos is basically perfect.

He has not lost any of his pace or stamina despite being 33, and Ramos still looks like a world-class central midfielder rather than a defender – with green stats for passing, flair and leadership.

Another older player who, perhaps surprisingly, still makes a world XI list for Sports Interactive is Marcelo. The Brazilian hasn’t done much of note in the last couple of years as Real Madrid flounder in Spain, but Andrew Robertson is not quite rated as highly just yet.

His appearance highlights the lack of left-backs in the world-class category at the moment. Marcelo has quite a lot of 13s and 14s, mixed with 18s in key attacking stats such as dribbling, technique and flair.

Manchester United’s problems mean Pogba starts the game much weaker than his real ability, with those already-strong stats rising by two or three points once the Frenchman has returned to form. United’s issues mean Pogba is gettable, too, at around £200million.

His best attributes reflect real life – passing, technique, first touch – yet his worst ones are largely absent. His positioning is 9, which is harsh, but work rate (13) and teamwork (14) are possibly too high. 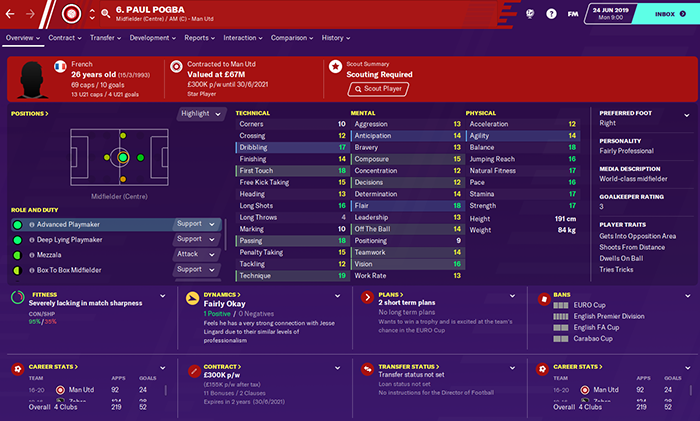 Few would argue with the Manchester City playmaker being on this list, but there is an argument he is underrated by Sports Interactive following a season-long injury in 2018-19. His vision (20) and crossing (19) ring true, but passing (19), technique (17), decisions (17), strength (13) and composure (15) are too low.

De Bruyne does improve, but not quite enough for our liking. The Belgian will nevertheless get a load of goals and assists should you start the game as City boss.

And onto five-time Ballon d’Or winner Lionel Messi who, as Ronaldo slows down, is emerging as the clear superior. Messi is such an alien it almost feels like Sports Interactive should have given him unique numbers. Turn him up to 21.

Messi has to make do with 10 attributes at 20, considerably more than anyone else on the game. His poor positioning (5), work rate (7) and strength (9) don’t make a difference.

You have to wait a couple of years before Mbappe fulfills his potential because at first those stats don’t look particularly good – and appear a little lopsided, too. He has the raw attributes of the perfect ‘advanced forward’ from the outset, but soon he becomes much more refined.

Those passing, vision, crossing and stamina stats improve in particular, making Mbappe the game’s best natural goalscorer and all-round striker. He will leave PSG, but only for a world-record fee. 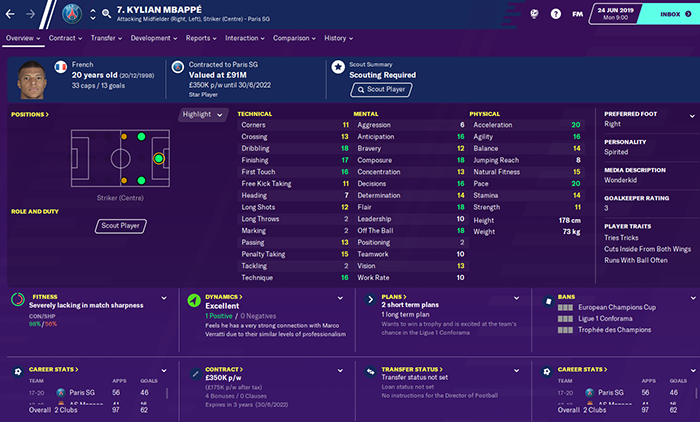 In the short-term, Ronaldo is a better player than the Frenchman. His reign doesn’t last very long being 33, but the Juventus forward has enough 20s and 19s in key positions to make him as ruthless in FM20 as he is in real life. Good luck getting him out of that £950k-per-week contract, mind.

Ronaldo has notably dropped, however, with his pace (16), passing (15) and vision (14) all taking hits as the Portuguese becomes a streamlined central striker.

On Football Manager 2020 Paris Saint-Germain’s megastar is just as volatile and elusive as in real life, with incredible 20-rated stats counterweighed by some seriously flawed ones. His positioning is just 2, and with teamwork of 8 and work rate of 10 Neymar will amble around the pitch doing whatever he feels like.

But it’s hard to resist a player with five 19s or 20s, including dribbling, technique, off the ball, and flair. Given how important fast wingers are on FM20, Neymar is close to being the best player in the game.