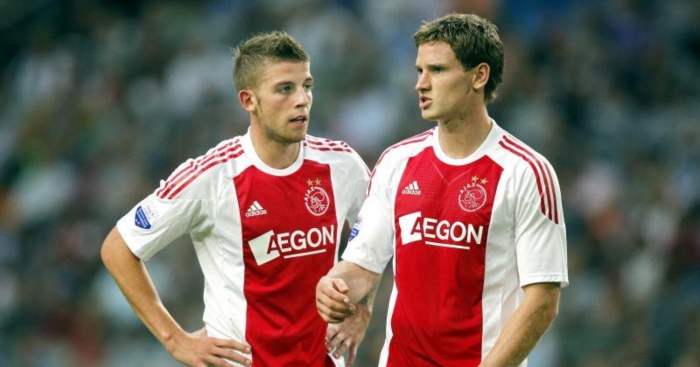 Ajax are renowned for developing some of the best young players in Europe through their academy – just ask Tottenham.

The Dutch giants have a prolific youth system which has gone on to benefit clubs all around the world.

We’d kind of forgotten Stekelenburg is still at Everton, but the 36-year-old only signed a new two-year deal at Goodison Park in the summer.

In January 2011, Manchester United first-team coach Rene Meulensteen said: “Stekelenburg is indeed the goalkeeper who is at the top of our wanted list. We have naturally been talking a lot among ourselves about who should replace Van der Sar.

“Alex Ferguson has spoken about Stekelenburg with Edwin and that does not seem strange to me at all.”

After catching the eye as a young player at the 2010 World Cup, Van der Wiel’s career has probably not lived up to expectations.

Seven years at Ajax were rewarded with two league titles and two Dutch Cups, but the right-back failed to properly establish himself at PSG, Fenerbahce or Cagliari.

The 30-year-old recently made headlines as he is set to leave Toronto after just one season due to a bust-up with coach Greg Vanney in pre-season.

Van der Wiel reportedly swung at Vanney and then claims he’s being forced out because having a winning mentality was “too much” for the #tfc coaching staff to handle. The same staff that won MLS Cup, shield and Canadian Champ in 2017 and made it to #CCL final 2018. Yikes pic.twitter.com/N2aO0mMjxD

Well, there was only going to be these two at centre-back, wasn’t there?

He may have scored a hat-trick from centre-back earlier this season and can also operate in midfield, but Blind gets the nod at left-back in our team, having won four titles with Ajax and then returning to the club after his spell with Manchester United.

Okay, it may be slightly Garth Crooks to pick Eriksen in central midfield, but cut us some slack.

The third and final current Tottenham player in this XI, Eriksen joined Ajax’s academy from Danish side OB in 2008, despite having undergone trials at Chelsea, Barcelona, Real Madrid, Manchester United and Milan.

“Of course Christian was amazing technically but, physically, he didn’t want to be in challenges,” Ryan Babel recent told The Sun about his former team-mate.

“For him to go to England, I was sceptical about it. But so far he has amazed me — he is an incredible player who is much stronger than he was before.”

De Jong is still technically an Ajax player until the end of the season, when he will join Barcelona in an initial €75million deal as one of the most hyped young players in world football.

The 21-year-old is already an established Netherlands international and joined Ajax’s academy from Willem II in 2015, spending two seasons with Jong Ajax.

Barcelona announced the signing by tweeting: “A new artist is coming next summer.”

ℹ️ All you need to know about the new @FCBarcelona midfielder 👇👇👇

Sneijder was picked up by Ajax at the age of just seven, with his older brother Jeffrey also a member of the academy.

At the age of 19 he made his senior debut and quickly established himself in the first team, starting a Champions League quarter-final against Milan just two months later.

Four years later, he became the second most expensive Dutch footballer in history after Ruud van Nistelrooy when he joined Real Madrid in a €27million deal.

Following in his father Patrick’s footsteps, Kluivert quickly caught the eye in Ajax’s first team before moving on to Italy.

While Patrick managed to win the Champions League with the Dutch outfit, Justin failed to make quite the same impact, although he did help the side reach the Europa League final, where they were beaten by Manchester United.

Since moving to Roma in the summer he has taken time to find his feet, but the winger has become the youngest player to score in the Champions League for the club.

It’s slim pickings at centre-forward, meaning Babel gets the nod despite often being deployed as a winger throughout his career.

But the 32-year-old became known as a bright prospect during his early days at Ajax, winning the Dutch Cup twice before joining Liverpool.

And he even found time to return for a season in 2012-13 to add a league title to his honours list.

Promes never actually appeared for Ajax’s first team after being released at the age of 16, but he’s gone on to enjoy a decent career.

“Those were the worst days of my career. My world collapsed on that one day,” Promes told FIFA’s official website about leaving Ajax. “I was 16 years old and was sent away by Ajax. I could not stop crying and did not know what to do with myself.”

Ajax decided to cut their ties with Promes due to his poor attitude on and off the pitch, and the winger almost walked away from football, only to rebuild his career at Haarlem and FC Twente.

The 27-year-old has become a Netherlands regular since moves to Spartak Moscow and Sevilla.