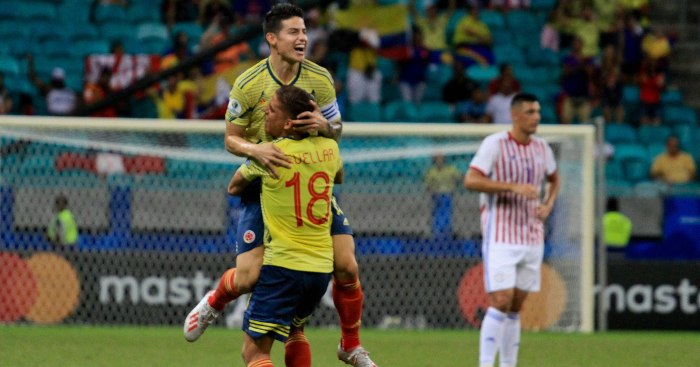 James Rodriguez is known for conjuring magic from his wand of a left foot, and we’ve seen plenty of clips resurfacing recently that highlight his talent as a move to Everton edges closer.

Rodriguez will be forever entwined with the 2014 World Cup. It was, after all, what brought his name to global attention, thrusting him into the spotlight as he lit up the tournament played on his home continent.

A £63million move to Real Madrid followed, where the Colombian teamed up with world-renowned coach Carlo Ancelotti. The pair instantly hit it off, with Rodriguez netting 13 times and providing as many assists in his maiden La Liga campaign.

Things went somewhat downhill from there. Ancelotti tried to revive his career three years later, signing him on loan at Bayern Munich, but Carlo got the chop one month later, leaving Rodriguez to play out yet another mediocre campaign.

Now, though, the duo are on the cusp of being reunited for a third time. Everton’s board have given the transfer the green light, so Rodriguez’s move to Merseyside seems imminent. Everyone loves a trilogy, don’t they?

Look, we know what you’re thinking — two star-crossed lovers desperately trying to rekindle a beautiful romance that’s well past its sell-by date… but hear us out.

There’s still magic in those boots, and to prove it, here’s a glorious outside-of-the-boot assist of Rodriguez’s from just last year:

It’s a clip that’s been doing the social media rounds this week and highlights some of the outrageous trickery Rodriguez is still capable of producing.

He may have been out of fashion for a couple of years now, but get him playing regularly in a side coached by his footballing father and watch him fly.

And if that doesn’t work, Dominic Calvert-Lewin could always put Rodriguez back en vogue — whether that’s by latching onto those delightful crosses or simply lending the midfielder a few rascal garments from his wardrobe.