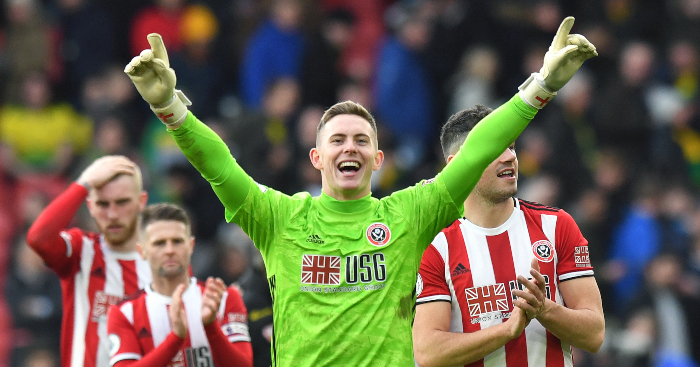 Goalkeepers are often difficult to judge on stats available to the public – but Opta have used one metric that ranks Manchester United loanee Dean Henderson among the five best in Europe’s top five leagues this season.

Opta have used their Expected Goals on Target data to provide the top five goalkeepers in Europe for Goals Prevented.

Only five teams have conceded more goals in Ligue 1 than Nice, but their leaky defence cannot be blamed on the performances of Benitez in goal.

The former Argentina youth international has recorded 7.0 Goals Prevented, according to Opta, despite keeping just five clean sheets in 29 appearances in all competitions this season.

Currently one of the most talked-about goalkeepers in the Premier League, Henderson has been tipped to usurp Jordan Pickford as England’s No.1, been linked with a move to Chelsea and been backed to replace David de Gea as Manchester United’s first choice.

Opta note that Henderson has 7.2 Goals Prevented for Sheffield United this season, although that’s not going to make manager Chris Wilder go overboard in his praise.

“That’s what he’s there for, to make a couple of saves,” Wilder laughed after Henderson’s man-of-the-match display in their victory over Norwich City earlier this month.

We still can’t quite believe he replaced Gianluigi Buffon at Juventus, but 7.4 Goals Prevented suggest Szczesny is not merely being protected by playing in a team so dominant in Serie A.

You won’t be reading any football tips and predictions for a while, but Juve clean sheets are definitely worth backing once everything returns to normal.

Newcastle United have dug out results all season under Steve Bruce despite often playing backs-to-the-wall football.

Dubravka deserves plenty of credit for the Magpies sitting eight points above the relegation zone, as his 8.7 Goals Prevented have made a big difference.

Newcastle management are said to be worried about the squad over the #CoronaVirusOutbreak as Martin Dúbravka catches pretty much everything. #NUFC

A surprise name at the top of the list, Crystal Palace stopper Guaita is one of the more unheralded goalkeepers in the Premier League, yet only five teams have conceded fewer goals in the competition – and no keeper in Europe’s top leagues can match his 9.6 Goals Prevented this season.

9.6 – The highest performing goalkeepers in Europe's top five leagues this season for Goals Prevented, based on Opta's Expected Goals on Target data:

The Joy Of…Goalkeeper sidewinder: From Taffarel to Reina to Pickford