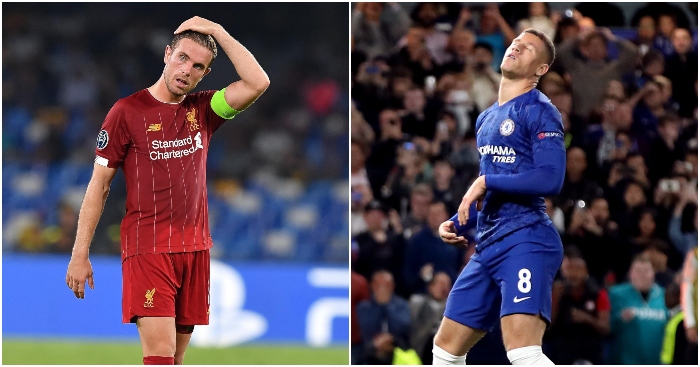 Both Liverpool and Chelsea suffered disappointing starts to their 2019-20 Champions League campaign as they were beaten in their opening matches by Napoli and Valencia, respectively.

But neither side has to start panicking just yet, with there being quite a recent example of an English club losing their first match before bouncing back to do pretty well.

We’ve taken a look back at the last 10 Premier League sides to lose their opening group stage fixture to see how they responded in the competition.

A promising first entry for any Liverpool or Chelsea fans reading this for comfort. Not only did Spurs suffer a heartbreaking opening defeat to Inter, blowing a 1-0 lead with five minutes remaining to lose 2-1, they were also beaten by Barcelona in their following match and drew 2-2 with PSV in their third.

Despite collecting just one point from their first three fixtures, Spurs responded by beating PSV and Inter before a draw with Barcelona secured their progression. Tottenham finished level on eight points with Inter but qualified for the knockout stages having scored more away goals against the Italian outfit.

After such a shaky group stage, they then saw off Borussia Dortmund, Manchester City and Ajax to reach the final, where they were ultimately beaten by Liverpool.

City feature on this list four times, more than any other English club, which is mostly down to a jittery first few years in the competition.

However, they suffered a surprise 2-1 defeat at home to Lyon in their opening Champions League fixture last season, only to bounce back in typically dominant style.

City dropped points just once more in the group stage, in a 2-2 draw against the same opponents back in France, to qualify with ease, and they saw off Schalke 10-2 over two legs before coming unstuck in a crazy quarter-final against Spurs.

While Spurs recovered from a shaky start in 2018, they failed to do so two years earlier after losing 2-1 at home to a Bernardo Silva-inspired Monaco.

They recovered to beat CSKA Moscow and draw at Bayer Leverkusen, only to lose the return fixture to the German outfit and be beaten once more by Monaco.

Consigned to third place and the Europa League, they were subsequently knocked out of that competition by Gent in the round of 32.

A night that was overshadowed by Luke Shaw’s horrific leg break, United lost 2-1 at PSV despite taking the lead through Memphis Depay.

They went into the final two games top of the group after a win over CSKA, abut  draw at PSV and defeat at Wolfsburg in their final two fixtures saw United drop into the Europa League, where they were beaten by Liverpool in the round of 16.

Another campaign in which City responded from a first-match defeat to qualify at a canter, they managed to finish top of their group despite losing both fixtures against Juventus, including a 2-1 loss at the Etihad in their opening game.

Two last-gasp winners to secure victories over Borussia Monchengladbach and Sevilla got them back on track, and they qualified with 12 points after beating both sides in the return fixtures. They got as far as the semi-final, losing 1-0 on aggregate to Real Madrid.

Surprise defeats to Dynamo Zagreb and Olympiakos in their opening two fixtures appeared to end Arsenal’s hopes of qualifying for the knockout stages in 2015-16, and their situation looked even worse after a 5-1 defeat at Bayern Munich left them with three points from four matches.

However, the Gunners rallied to record 3-0 wins over Olympiakos and Zagreb to secure qualification thanks to a healthier goal difference than the Greek outfit, only to be drawn against Barcelona in the last 16.

2015-16 was the second consecutive season Arsenal lost their opening fixture, having been humbled 2-0 at Borussia Dortmund in 2014-15.

Current Arsenal hero Pierre-Emerick Aubameyang was among Dortmund’s scorers that night, but the Gunners won four of their remaining five fixtures, including a 2-0 victory over the German outfit in which Yaya Sanogo scored, to finish second only on goal difference. An inviting draw against Monaco followed, only for the Gunners to fall to a 3-1 defeat at home.

Another shaky City campaign started with Jerome Boateng scoring a 90th-minute winner for Bayern Munich against his former club, and Manuel Pellegrini’s side were without a win after four games after a surprise defeat to CSKA Moscow at the Etihad.

But some late heroics from Sergio Aguero, who bagged a hat-trick, secured a 3-2 victory over Bayern Munich, and a gutsy 2-0 win at Roma in which City were without a number of key men saw the Premier League champions sneak into the knockout stages.

They were ultimately left to rue their second-place finish as they were drawn against Barcelona, who triumphed 3-1 in aggregate.

Basel upset the odds against Chelsea in their opening Champions League fixture of the 2013-14 campaign by coming away from Stamford Bridge with a 2-1 victory, with Mo Salah on the scoresheet for the visitors.

Salah also scored a late winner in the return fixture, but the Blues still finished top courtesy of four victories over Steaua Bucharest and Schalke.

Come January, Chelsea signed Salah – what ever happened to him? –  and beat Galatasaray and PSG in the knockout stages before Mourinho’s men were outb*starded by Diego Simeone’s Atletico Madrid in the semi-finals.

A campaign which started with City taking a 2-1 lead at Real Madrid in the 85th minute only to lose 3-2 ended with the club failing to win a single group stage fixture.

They drew their home fixtures against Madrid, Borussia Dortmund and Ajax, only to lose all three away games and finish bottom of the table.