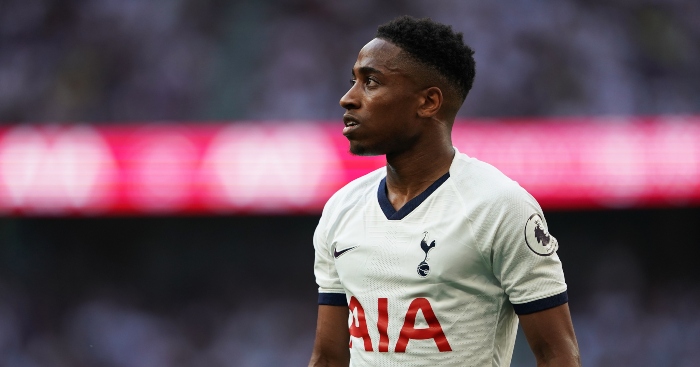 Tottenham‘s academy has developed plenty of top talents, from Sol Campbell to Harry Kane and plenty in between.

Troy Parrott and Japhet Tanganga are the latest to knock on the door of the first team, with Irish Under-21 international Parrott making his senior debut in Tuesday night’s Carabao Cup exit at Colchester after scoring for fun at Under-18 level and Hackney-born England youth defender Tanganga joining him in the starting line-up at the Colchester Community Stadium.

They’re in fine company already, as shown by the last 13 players to make the step up after coming through the Spurs academy.

Teenage defender Eyoma was among the players handed a run-out at Tranmere in last season’s FA Cup after Fernando Llorente’s hat-trick had set Spurs on their way to a 7-0 win.

Eyoma has featured for the Under-23s this season but is yet to add to his 11 first-team minutes at the time of writing.

Marsh also made his debut in that Tranmere game, replacing Heung-min Son with 25 minutes to go, but the 20-year-old is also still waiting for his next chance.

The midfielder moved on loan to Leyton Orient over the summer and has featured regularly for the League Two side.

Since making his senior bow in last season’s League Cup victory at West Ham, Skipp has made more than a dozen appearances, including two Premier League starts.

He has been in the squad on multiple occasions this season, though his only minutes have come in the form of late substitute appearances against Aston Villa and Manchester City.

Skipp’s fellow midfielder Amos made his debut a little earlier, replacing Eric Dier late on in last season’s Premier League win over Newcastle United, only for an ACL injury to end his season much earlier than planned.

Now fit and firing once more, the 22-year-old has joined QPR on a season-long loan and helped the Rs surprise their Championship rivals under new boss Mark Warburton.

Enfield-born forward Sterling picked up European minutes for Spurs before making his domestic bow, making a late cameo in a Champions League victory over APOEL Nicosia in December 2017.

He added FA Cup minutes against Crystal Palace last season before ending the campaign on loan at Sunderland, for whom he scored once, and joining Doncaster for 2019-20. He opened his account for his new loan club in a victory over Lincoln City in the Football League Trophy.

Georgiou made his Spurs debut against the same opposition as Sterling, playing in the earlier meeting in Cyprus in September 2017 as a late replacement for Moussa Sissoko.

The London-born midfielder is already a full Cyprus international, featuring in several Euro 2020 qualifying games, but he has been loaned out to Ipswich Town in search of first-team action this season.

📰 @_Ant_georgiou has signed a new contract with the Club until 2021.

He has now joined League One side @IpswichTown on loan until January.

Midfield prospect Oakley-Boothe was just 17 when he made his first-team bow for Spurs, helping see out a League Cup win over Barnsley at Wembley in 2017.

A member of England’s Under-17 World Cup-winning squad that same year, he has begun the season as part of the Under-23 set up in North London and played 90 minutes in the impressive win over Man City at the Tottenham Hotspur Stadium

Walker-Peters feels like he’s been involved for much longer than two years, but his debut only arrived in August 2017 as part of an in-at-the-deep-end Premier League start away to Newcastle in front of the Sky cameras.

The right-back now has more than 20 Tottenham games under his belt, stepping up at the start of this season after Kieran Trippier’s exit and making three top-flight starts in succession.

Spurs’ 2-1 defeat to Liverpool in the 2016-17 League Cup was notable for the Reds giving a debut to Trent Alexander-Arnold, but he wasn’t the only youngster earning his first minutes that night.

Harrison came on as a late sub for Georges-Kévin Nkoudou, but that would prove to be his only Spurs appearance. After a number of loan spells, some more fruitful than others, he made a permanent switch to Vincent Janssen’s former club Almere City over the summer and opened his account for the Dutch side with the winner against AZ II.

The previous round of the competition saw Mauricio Pochettino hand three youngsters their debuts, with American international centre-back Carter-Vickers the only one of the three to start the 5-0 win over Gillingham.

The Essex-born defender earned his first US senior call-up later in 2016 but is still waiting on his first Premier League minutes. After featuring for Graham Potter’s Swansea City in the Championship last season, he was sent out on loan to Stoke City in August

Edwards was introduced for the final 15 minutes against Gillingham, and at the time the attacking midfielder was seen as the man most likely to break into Spurs’ first XI.

He has not kicked on as hoped, though, requiring an impressive loan move to Excelsior last season to kick-start his career. Transferred to Portuguese side Vitória over the summer, he could end up taking on Arsenal in the Europa League.

📰 We have reached agreement with Portuguese side Vitória for the transfer of Marcus Edwards.

We wish Marcus all the best for the future. pic.twitter.com/muHPC2uW9R

London-born defender Walkes took to the field against Gillingham as the third and final sub, replacing Ben Davies for the last 10 minutes of the match, but shortly after the turn of the year he opted to cut his teeth in MLS on loan at Atlanta United.

A temporary stint at Portsmouth followed, with the south coast club eventually making his move permanent in the summer of 2018. Walkes played in more than half of Pompey’s League One games last season as they narrowly missed out on promotion.

Onomah was one of the first youngsters to break into the first team under Mauricio Pochettino, making his debut a couple of months after Harry Winks first played for the club and getting a 15-minute run-out against Burnley in the 2014-15 FA Cup.

The Enfield-born midfielder made a total of 32 Tottenham appearances in competitive games, including Champions League appearances against Bayer Leverkusen and CSKA Moscow, but spent the last two seasons out on loan and left permanently over the summer, joining Fulham as part of the Ryan Sessegnon deal.

How the last 10 Tottenham big-name departures have subsequently fared

Nine players who flopped at Spurs but shone after leaving: Paulinho, Boateng…