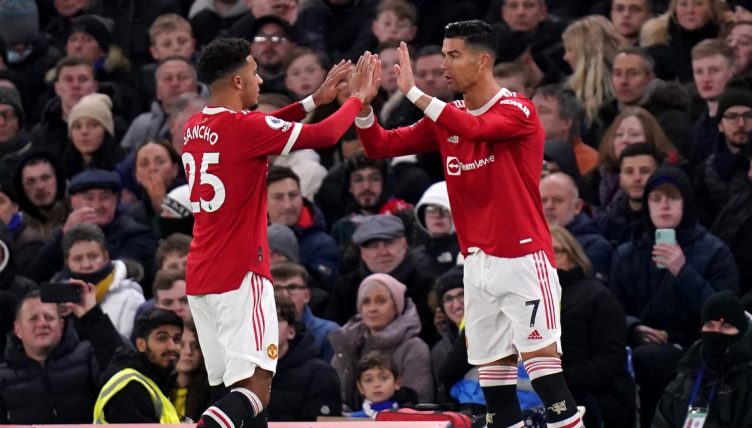 Throughout his illustrious career, Manchester United’s Cristiano Ronaldo has unsurprisingly been one of the first names on a team sheet.

But Ronaldo is now 36 years old and there have been a few occasions where he has had to settle for a place on the bench in recent seasons.

We’ve taken a look at that eight times that he has started a league game on the bench since the start of the 2013-14 season.

While Serie A sides usually have a winter break during the Christmas period, they had a full Boxing Day programme in 2018.

Ronaldo, who had joined Juventus from Real Madrid earlier that year, was named on the bench for their away game against Atalanta.

Juventus took the lead through Berat Djimsiti’s early own goal before Atalanta’s Duvan Zapata struck twice either side of Rodrigo Bentancur’s sending-off.

Ronaldo then replaced Sami Khedira and headed home an equaliser in the 78th minute to rescue a point for Massimiliano Allegri’s side.

Ronaldo’s goals fired Juventus to the top of Serie A, but they were on the brink of a Champions League exit in February 2019 after losing 2-0 to Atletico Madrid.

Allegri decided to leave Ronaldo as an unused substitute for a league game against Udinese, allowing his forward to get some rest.

It proved to be the right decision as Juventus beat Udinese 4-1 without Ronaldo, who then scored a hat-trick against Atletico in the last-16 second leg.

After testing positive for coronavirus and missing four Juventus games in October 2021, Ronaldo was named on the bench against Spezia Calcio.

With the scores level at 1-1, he was called into action in the 56th minute and found the back of the net three minutes later.

Adrien Rabiot then gave Juventus a two-goal advantage before Ronaldo got his second goal of the game and sealed the win with a cheeky Panenka penalty.

Cristiano Ronaldo back with a bang! Two goals as a second half substitute saves Juventus & earns the Italian champions all 3 points vs Spezia.

Juventus won just 1 of 4 games without Ronaldo as he recovered from coronavirus, & were on course to draw this one too but for Ronaldo. pic.twitter.com/QirVQuPGRq

After Juventus lost against Porto in the Champions League last-16 first leg, Pirlo decided to give Ronaldo some rest before the second leg.

The forward was named on the bench for the Serie A game against Lazio and watched from the sidelines as Andrea Pirlo’s side took a 3-1 lead. Ronaldo then replaced Morata in the 69th minute but wasn’t able to get himself on the scoresheet.

Despite needing a win against Bologna on the final day of the 2020-21 season to secure Champions League football for Juventus, Pirlo named Ronaldo on the bench.

The Portugal international remained on the bench for the entire game but Juventus coped without him, recording a 4-1 win to finish fourth.

“It was a shared decision, Ronaldo was tired after Wednesday’s game, so I decided to start [Alvaro] Morata, another great player,” Pirlo said after the game. “Ronaldo was available, I have a deep squad, and I can pick many different players.”

Ronaldo was named on the bench for Juventus’ first Serie A game of 2021-22 after reportedly asking to be omitted from their starting XI.

He replaced Morata in the 59th minute but could do nothing as Gerard Deulofeu capitalised on a Wojciech Szczesny mistake to make it 2-2.

Ronaldo then headed home an apparent winner in the fourth minute of stoppage time but his celebrations were cut short when the goal was disallowed by the VAR system for a very marginal offside call.

It proved to be his last appearance for the club, and he completed a return to Manchester United on transfer deadline day.

Despite scoring a dramatic late winner against Villarreal in September 2021, Ronaldo was named on the bench against Everton a few days later.

Anthony Martial broke the deadlock with a brilliant goal and Ronaldo was then brought on in the second half as United looked to double their lead.

But Everton equalised in the 65th minute through Andros Townsend, who then copied Ronaldo’s iconic celebration. The 36-year-old was unable to score a winning goal for United and stormed down the tunnel after the full-time whistle.

“He’s an exceptional player, exceptional finisher, goalscorer, an exceptional professional,” Solskjaer said after the game. “It’s hard to leave him out and I think everyone would love to – how do you say? – if you can go and play six games in six days and play the same eleven every time.

“It’s great, but rotation – we need to get to April and May with everyone firing. We got to May in the final stretch of last season and we were too tired. I manage the players for the club.”

“You should always start with your best players.” [@MirrorFootball] #MUFC pic.twitter.com/7dLgZAu6s4

Carrick made a big call by starting Ronaldo on the bench and selecting a front three of Jadon Sancho, Bruno Fernandes and Marcus Rashford.

That decision appeared to be vindicated when Sancho took advantage of a Jorginho mistake and gave United the lead in the 50th minute.

Ronaldo then replaced an injured Sancho in the 64th minute but Chelsea equalised through a Jorginho penalty moments later.

The Portugal international failed to register a single shot and was also booked for dissent during the closing stages as the game finished 1-1.