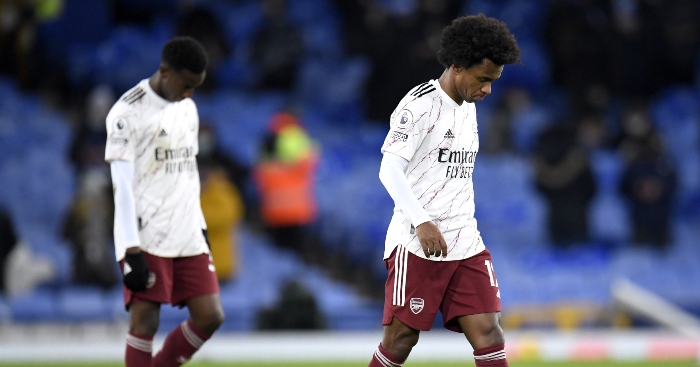 Despite being one of the Premier League’s ‘big six’ sides, Arsenal will find themselves in the bottom half of the table on Christmas day.

The Gunners are currently 15th after 14 league games this season and Mikel Arteta will be hoping to turn their fortunes around in 2021.

We’ve looked at the last five times ‘big six’ clubs were in the bottom half on Christmas day and how they fared in the second half of the season.

This is starting to become a worrying trend for Arsenal.

The Gunners endured a terrible start to 2019-20 and Unai Emery was sacked in November after winning four of their first 13 Premier League games.

Mikel Arteta took charge of his first game on Boxing Day and led them to eighth place while also winning the FA Cup in his debut season.

After winning the Premier League with Chelsea in 2014-15, Jose Mourinho had his inevitable implosion at the start of the following campaign.

Mourinho was sacked in the middle of December 2015, and the Blues found themselves 15th in the league on Christmas day, just three points above the relegation places.

Roman Abramovich turned to Guus Hiddink in an attempt to steady the ship and the interim manager steered the side to 10th place.

Chelsea’s unhappy season was compounded as they were knocked out of the Champions League by PSG and lost 2-0 to Everton in an FA Cup quarter-final.

Tottenham suffered their worst ever start to a season under Juande Ramos, picking up just two points from their opening eight league games in 2008-09.

Harry Redknapp replaced Ramos in October 2008 and helped to turn things around but Spurs still found themselves 16th in the table at Christmas.

Their form continued to improve in the new year and they won eight of their final 13 leagues games en route to an eighth-placed finish.

Spurs also reached the League Cup final in March 2009 but lost to Manchester United on penalties.

Mark Hughes’ side won five, drew three and lost 10 of their opening 18 Premier League games and were in the bottom three at Christmas.

City signed Wayne Bridge, Craig Bellamy, Shay Given and Nigel de Jong in the January transfer window before finishing 10th in the league.

They lost to Nottingham Forest in the FA Cup also reached the quarter-finals of the UEFA Cup before being knocked out by Hamburg.

After finishing fifth for two consecutive seasons, infamously coming just a dodgy lasagna away from Champions League qualification, Tottenham picked up just seven points from their opening 10 league games in 2007-08 and Martin Jol was sacked in October 2007.

Juande Ramos was appointed as Jol’s successor and, while their league form started to improve, Spurs were still only 13th at Christmas.

Despite underwhelming in the league, Tottenham’s season was not all doom and gloom as they won the League Cup after beating Chelsea 2-1 in the final, their last honour to date.