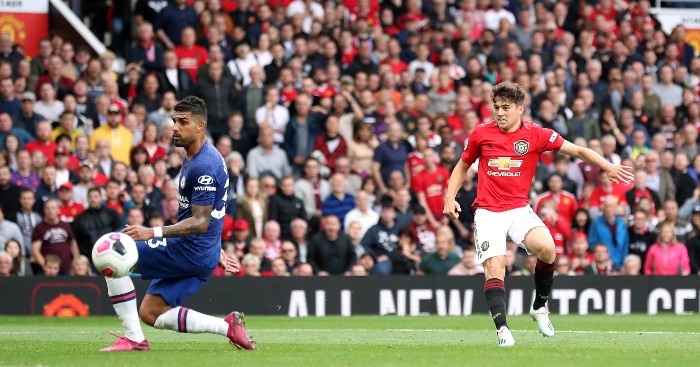 When Daniel James beat Chelsea goalkeeper Kepa with a deflected strike, it didn’t just put the gloss on an already convincing Manchester United victory, it also added the Welshman’s name to a select group.

James became the 19th United player to score on their Premier League debut – more than some other top-flight clubs but still less than one per season.

Some of the others to do this have failed to turn it into a long United career – Federico Macheda is one who springs to mind – but others have done much better out of the whole thing. Here’s how the five before James got on.

Lukaku looked like a world-beater as Manchester United beat West Ham 4-0 in August 2017. Then again so did Henrikh Mkhitaryan that afternoon, and he was gone within six months.

Not only did Lukaku score twice against West Ham, he scored seven goals in his first seven Premier League games after joining for £75million from Everton.

However, after failing to score in each of his last six league games for United, he was shipped off to Inter Milan over the summer.

José Mourinho handed four players their first Premier League starts on the final day of the 2016-17 season as United prepared for the Europa League final against Ajax with a 2-0 win against Crystal Palace.

One of the four, Stockport-born Harrop, took just 15 minutes to break the deadlock after starting the game behind Wayne Rooney, cutting in from the left and blasting a shot beyond Wayne Hennessey.

That was the midfielder’s only appearance for United, though. He turned down a new deal and instead joined Championship side Preston North End, for whom he was a regular until injury struck last season.

Ibrahimović had already scored in the Community Shield against Leicester City before he followed it up with the clincher in Mourinho’s first Premier League game in charge as United beat Bournemouth 3-1 in August 2016.

The Swede beat Artur Boruc with a low drive from 25 yards, adding another 16 league goals in his debut campaign.

He didn’t score on his second United debut after re-signing the following season, though he did put away a match-winning double in his first MLS game for LA Galaxy after moving to California in 2018.

Rashford was the beneficiary of some great timing, stepping into the fold in the Europa League when other attacking options had been loaned out, and proceeding to make his mark instantly.

He scored twice against FC Midtjylland in February 2016 and added two more against Arsenal in the following match to deal a huge blow to the Gunners’ title hopes, and he has barely looked back since.

Rashford has already scored more than 50 goals for club and country, which isn’t too shabby when you consider he’s still basically a baby.

Martial was thrown into the deep end after his big-money move from Monaco, coming on for Juan Mata in the second half of a tense meeting with Liverpool in September 2015.

Not that he was going to let that affect him. After the score had gone from 1-0 on his arrival to 2-1 with five minutes remaining, he placed an inch-perfect shot beyond Reds goalkeeper Simon Mignolet to clinch victory.

The Frenchman stalled a little under Mourinho but waited things out and outlasted the Portuguese. It seems to have benefited him; the opening day strike against Chelsea was Martial’s 13th since the start of last season.

Can you name Man Utd’s top goalscorer from every Premier League campaign?