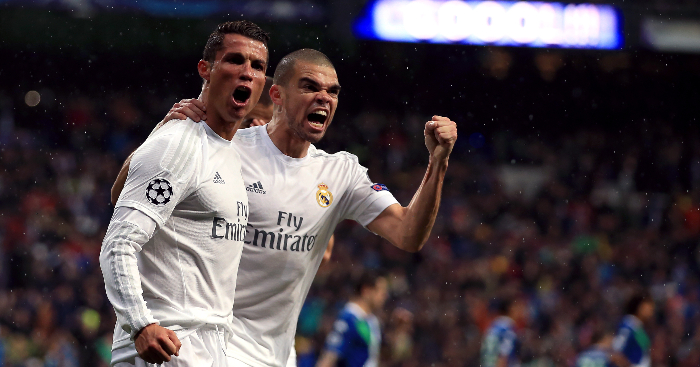 There was a typically calm and measured response from the Spanish media after Real Madrid‘s 2-1 defeat at home to Manchester City in the first leg of their Champions League last-16 tie.

Local pundit Tomas Roncero was literally crying about “the end of an era” after the result, and the odds are certainly stacked against them for their trip to Manchester for the second leg, with Sergio Ramos suspended and Cristiano Ronaldo no longer there to bail them out.

There will be plenty of talk of summoning “the spirit of Juanito” (the cult hero that epitomises the club’s never-say-die attitude), but do they have what it takes to turn things around? Here’s how they fared the last five times they lost the first leg of a Champions League knockout tie.

Zinedine Zidane might never have built a European dynasty had his side not managed to recover from a 2-0 defeat to the unfancied Bundesliga side back in 2016, going on to win the trophy – the first of three straight triumphs.

They won the second leg 3-0 at the Bernabeu thanks to a hat-trick from Cristiano Ronaldo, a trick he’d repeat three years later for Juventus, scoring all three as they cancelled out the two-goal first-leg deficit in a last-16 clash against his old foes Atletico Madrid.

Zidane will be looking for similar magic this time, but doing so against Pep Guardiola’s Premier League champions, and away from home, is a much tougher ask than against Dieter Hecking’s unremarkable Wolfsburg side.

Ronaldo replied on the Pitch in the 2nd Leg 🐐pic.twitter.com/FCUnRdimDu

Carlo Ancelotti was looking to become the first manager to win the competition two years running in the Champions League era. But he’d be denied by his former club, Serie A champions Juventus, in the 2015 semi-finals.

Former Madrid academy product Alvaro Morata scored the opener in the first leg in Turin, which was cancelled out through Ronaldo on the half-hour mark, but a Carlos Tevez penalty in the second would give The Old Lady a 2-1 victory going into the second leg at the Bernabeu.

Ronaldo scored again, this time with an early penalty, to open the scoring early on in the second leg, which had them going through on away goals as things stood. But again, Morata would be the thorn in their side as he scored the decisive goal to send the visitors through at Madrid’s expense.

Max Allegri’s men would be denied in the final by the Barcelona of Lionel Messi, Luis Suarez and Neymar, who won 3-1 in the final to secure a historic second treble in six years.

Jurgen Klopp had achieved remarkable things in Germany to lead Borussia Dortmund to two titles ahead of Bayern, but it was in the Champions League where he announced himself to the wider watching world as one of the best managers in the world.

Robert Lewandowski, too, underlined his status as one of the finest strikers of the modern era with an unforgettable four-goal haul as Klopp’s gegenpressing Dortmund blitzed Madrid with a 4-1 victory.

Jose Mourinho’s Madrid came close to a comeback for the ages when Karim Benzema and Sergio Ramos scored two goals in the final 10 minutes to take them within one more of the final, thanks to Ronaldo’s away goal in the first leg. They couldn’t quite manage it, though.

An injury-time winner from Mario Gomez gave Bayern Munich a 2-1 lead going to the Spanish capital for round two, but they made a disastrous start as Ronaldo scored two goals in the opening 15 minutes.

Arjen Robben levelled things on aggregate, scoring a penalty just before the half-hour mark of the second leg, and a tense, well-matched semi-final would remain level for 90 more minutes as both sides eventually settled for penalties.

In the shootout, Ronaldo and Kaka saw their penalties saved by Manuel Neuer and their fate was eventually sealed when Ramos sent his effort well over the bar and into orbit.

That season, Mourinho’s side knocked Guardiola’s Barcelona off their perch and set a new 100-point record in La Liga, but they couldn’t add the most coveted trophy of all.

Barcelona and Madrid, Guardiola and Mourinho, Messi and Ronaldo, a total breakdown of relationships within the World Cup-winning Spanish national team.

This was a time in which the tension between the two historic rivals reached boiling point, and the fixture list conspired to see them play out four Clasicos four times in the space of 18 days.

In the first match, a La Liga fixture at the Bernabeu, Messi and Ronaldo both scored in a 1-1 draw that kept Barcelona eight points clear and well on their way to a third-straight league title. The second, the Copa del Rey final, was won by Madrid and decided by a brilliant Ronaldo header in extra time. But the main course was still to come.

“In this room [Real Madrid’s press room], Mourinho is the chief, the fucking man,” Guardiola snapped before the first leg of the Champions League, after his opposite number criticised him for talking about refereeing decisions.

“In here he is the fucking man and I can’t compete with him. If Barcelona want someone who competes with that, then they should look for another manager.”

A Messi masterclass at the Bernabeu ultimately decided things in the first leg. The Argentinne burst into the six-yard box to tap home the opener in the 76th minute, after Pepe had been sent off for a rash tackle on Dani Alves. He doubled the lead three minutes from full-time with one of the great solo goals, dribbling from the centre circle and past three white shirts before beating Iker Casillas.

Mourinho was sent off and received a touchline ban for the second leg, but he allowed himself a rant about a conspiracy involving Barcelona, their Unicef sponsorship, refereeing decisions and UEFA, before adding their task to turn things around at the Nou Camp was “impossible”.

And so it proved to be, but Madrid put up a decent fight, drawing 1-1 at the Camp Nou.