The most valuable player for every age from 16-40, according to Transfermarkt 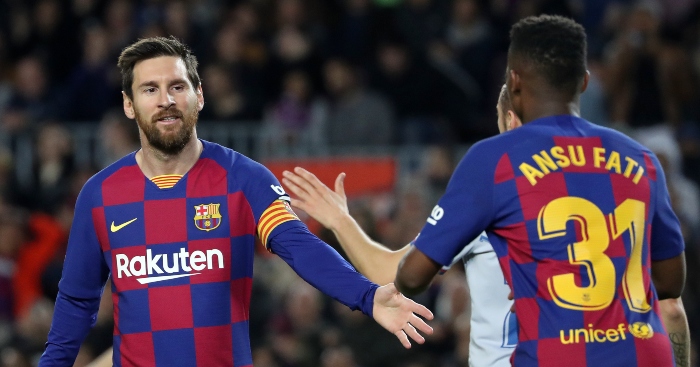 The amount of money invested in modern football means that every player has a price – no matter what age they are.

Promising talents like Ansu Fati and established stars like Cristiano Ronaldo both have huge market values but for different reasons.

We’ve looked at the most valuable player for each age from 16 to 40, using data from Transfermarkt, whose valuations should admittedly be taken with a pinch of salt.

Cherki is a product of the youth academy of Lyon and made his first-team debut for the French side earlier this season.

The 16-year-old has already made a big impact in 12 appearances in all competitions, scoring three goals and registering two assists.

Fati burst onto the scene with Barcelona earlier this season and has established himself as a regular in the first-team.

The forward has broke several records already this season, becoming the youngest player to score for the Spanish champions in La Liga.

Reinier was part of the Flamengo side that won the Brazilian league and the Copa Libertadores last season.

His performances earned him a £26million move to Real Madrid in January and the midfielder cried during his unveiling the Bernabeu.

When years of sacrifice finally pay off.

This is what it means for Reinier, who is living his childhood dream at Real Madrid 🙏 pic.twitter.com/ZWbg5nrzNg

Sancho is one of the most sought after players in Europe right now with several clubs vying for his signature.

But the winger won’t come cheap, and at €120 million, Sancho is worth twice as much as the second most valuable 19-year-old, Borussia Dortmund team-mate Erling Haaland.

Felix netted 20 goals in his debut senior season with Benfica before he completed a €127million transfer to Atletico Madrid in the summer.

The 20-year-old won the prestigious Golden Boy award in 2019 but has struggled to find his best form, struggling with injuries at the Wanda Metropolitano this campaign.

Mbappe may only be 21 but the forward is still the most valuable player on this list.

The France international caught everybody’s attention with Monaco in 2016-17 before making a £165million move to PSG. He has already won three Ligue 1 titles and the World Cup during his career.

Liverpool full-back Trent Alexander-Arnold is just behind Mbappe as the second most valuable 21-year-old at €110million.

When a dream becomes a reality.

De Jong became one of the most sought-after midfielders in Europe after helping Ajax to a domestic double and the semi-finals of the Champions League in 2018-19.

The 22-year-old sealed a €75million move to Barcelona and has become one of the first names on the teamsheet at the Camp Nou.

Tottenham signed Alli from MK Dons for £5million and his valuation has sky rocketed over the last five years.

Sane hasn’t played all season due to a serious knee injury but his stock is still high, with Bayern Munich retaining their interest in the winger.

Pep Guardiola has helped transform Sterling into a world class winger and, at just 25 years of age, he is still improving.

Raheem Sterling has scored 10+ goals in all competitions in each of his last seven seasons:

Kane has established himself as one of the best strikers in the world, scoring 181 goals in 278 appearances for Spurs with 17 in 25 this season.

It’s strange to think that Liverpool’s signing of Salah for €42million in 2017 was considered something of a risk at the time.

Neymar became the most expensive footballer in the world in 2017, signing for PSG from Barcelona for a staggering €222million.

The Brazilian has been heavily linked with a move back to Spain, and it would be interesting to see how much a transfer would cost in the current market.

Eden Hazard was Real Madrid’s big money signing in the summer but has struggled with fitness issues at the Bernabeu to date.

Arsenal have had a poor season so far but one positive has been the form of Pierre-Emerick Aubameyang.

After winning the Premier League Golden Boot last season, the striker has 15 goals in 24 league appearances in 2019-20.

At 31, Robert Lewandowski has remained at the peak of his powers, scoring 36 times in 31 matches this season.

Manchester City striker Sergio Aguero is the second most valuable 31-year-old in world football at €65million.

Messi might be 32, but he has shown so signs of slowing down.

The Argentine won the Ballon d’Or for the sixth time in 2019 and has already got 35 goals and assists so far this season.

Suarez may be past his best, but he still knows where the goal is, scoring 14 goals in 23 appearances this term before injury struck.

Despite being 34, the midfielder is still a key part of Pep Guardiola’s City team and has made 26 appearances in all competitions this season.

Ronaldo has continued to prove that age is just a number.

The 35-year-old is still one of the best players in the world and has just scored in 11 consecutive Serie A games for Juventus.

After leaving Bayern Munich at the end of last season, Ribery looked reinvigorated at Fiorentina but picked up an ankle injury in December 2019.

Quagliarella also became the oldest ever player to score for Italy when he converted a penalty against Liechtenstein in 2019.

Football’s answer to Benjamin Button is still defying the odds and has scored three goals in eight appearances since re-signing for AC Milan in January.

Adruiz has scored over 150 goals across all competitions for Atheltic Bilbao over three spells.

After scoring against Barcelona in August, the 39-year-old became the second player, after Messi, to have scored in 15 consecutive seasons in La Liga.

Middlesbrough fans may remember Lee from his brief and unsuccessful spell on Teeside between 2007 and 2008.

The striker has spent the last 11 years representing South Korean side Jeonbuk Hyundai Motors and doesn’t seem ready to hang up his boots just yet.