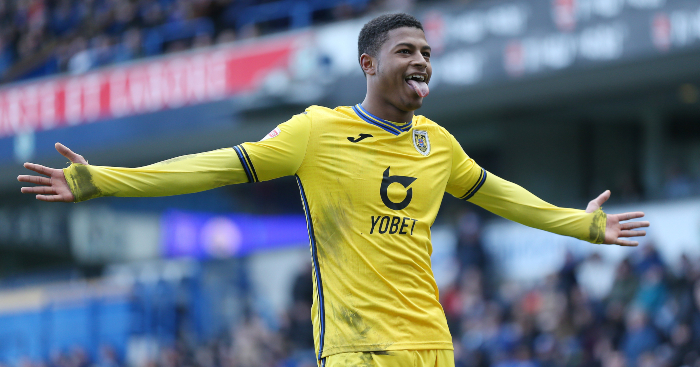 Liverpool have handed a number of young players a chance in the first team this season – but some have had to try catch Jurgen Klopp’s eye while on loan elsewhere.

The cup competitions have seen Klopp hand the likes of Curtis Jones and Neco Williams a chance to impress in Liverpool’s senior side, and some loanees may now wish they had stayed at Anfield.

We’ve taken a look at the nine Reds players currently out on loan and how they’ve fared to date.

Klopp’s first signing at Liverpool, Grujic is spending a second consecutive season on loan at Hertha Berlin, appearing 42 times and scoring goals in the Bundesliga across those two campaigns.

“My dream is to get the chance in Liverpool next season,” the midfielder said in December, only for reports in February to suggest the Reds are reading to accept offers of around £25million(!) for the player.

Liverpool made Ojo the most expensive 14-year-old in the history of football when they paid MK Dons a reported £2million to sign the winger.

He has since played 13 times for the Reds’ first team but is now into his fifth loan spell away from the club, playing under Steven Gerrard at Rangers.

Now 22, it has not exactly gone to plan for Ojo, who has not started a league game since January and last scored in September.

Playing in goal for Huddersfield Town hasn’t been easy this season, and Grabara has been absent since suffering a serious head injury following a clash with team-mate Christopher Schindler in the victory at Hull City in January.

Liverpool’s youngest ever goalscorer has endured a frustrating couple of seasons after seeing a loan to Sheffield United cut short last term after struggling for game time.

Woodburn dropped down to League One to join Oxford United on a season-long loan and initially impressed, only to break his foot and the suffer a carbon copy of the injury on his other foot as he set to make his return.

He is now ready to return to action, only for the coronavirus to prevent him from getting back on the pitch.

Ben Woodburn in this despite playing his last match on October 5th 👀 #OUFC https://t.co/IaOUAOnagP

Awoniyi goes one better than Ojo and is now onto his sixth loan spell away from Liverpool as he spends the season at Klopp’s former club Mainz.

The Nigerian striker has struggled to get a work permit to play for Liverpool, but his return of zero goals in six Bundesliga appearances and the fact he was subbed off at half-time in his only start suggests he may not have much of a future at Anfield anyway.

Seven goals in his first season playing regularly in the Premier League while on loan at Bournemouth is a healthy return for Wilson, who, at the age of 22, has a decision to make on his long-term future in the summer.

"In the summer I'm concentrating on Wales but after that, I might have a decision to make."

Fantastic insight from Harry Wilson on the dilemmas faced by young players coming up at big clubs. pic.twitter.com/fI6uimiAFV

Phillips spent the first half of the season on loan in Germany’s second tier with Stuttgart before being recalled in January to cover a spate of injuries in defence, appearing in the FA Cup victory over Everton.

The centre-back was then loaned back to Stuttgart and has now made 19 appearances in all competitions as the side sit second in 2.Bundesliga.

Having spent the second half of last season on loan at Reading, Ejaria returned to the Madejski Stadium for the 2019-20 campaign, at the end of which the Royals have an obligation to sign the attacking midfielder permanently.

They will take up that obligation quite happily after the 22-year-old has established himself as one of their main offensive weapons, averaging more successful dribbles per game than any other player and the third most chances created per game.

Players with the highest average of successful dribbles per game:

Were it not for a serious knee injury, Brewster would likely have gained much more first-team experience prior to this season.

The striker eventually joined Swansea City on loan in January to finally get regular minutes of senior football under his belt and has made a positive start with four goals in his first 11 appearances.