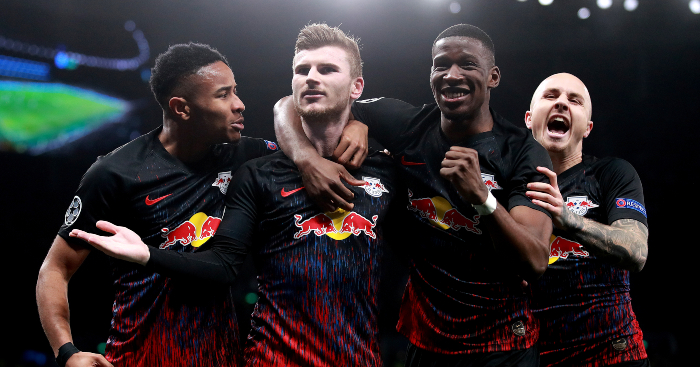 They say ‘wear the badge with pride’, but what if the badge is just the logo of a soft drink? You need thick skin to support these embarrassing teams.

Every team has bad days. And when your team loses, it can be the worst feeling in the world.

In truth though, supporting an unsuccessful team is much better than supporting a team that’s just plain embarrassing.

These are, without question, the most embarrassing teams to support from Europe’s top divisions.

Sport Lisboa e Benfica seem like a pretty cool team. They play in Lisbon (great), they have a massive stadium and they’ve had players like Eusebio, Pablo Aimar, Simao Sabrosa and Angel di Maria.

But their reputation has hit the rocks in recent years.

In 2017, Football Leaks published confidential emails allegedly stolen from the Portuguese club, the contents of which were highly embarrassing.

The emails discussed the bribing of referees and other scandalous activities. Worse still, the bribes in question included prostitutes and hotel bills.

Benfica denied it all: “We maintain the firmness and clarity of our position, announced as soon as it became public knowledge of this situation, regarding the lack of facts that justify any accusation in this process.”

The tragicomic recent failures of Manchester United and Arsenal have parallels, in magnitude if not in style.

Twenty years ago, these two were the most feared teams in the country. Today, they are Ed Woodward and Troopz, Phil Jones and Shkodran Mustafi, a six-foot fluffy devil competing with a six-foot fluffy dinosaur to see who can look the more ridiculous.

Highlight of this match for me was in the first half when Jim Beglin said "Is this mediocrity?" 😭😭😭😭😭😭

They’ll be back, probably, but that’s little consolation for fans of either club right now.

On the one hand, there’s a certain prestige associated with Juve.

That’s probably got something to do with the 35 league titles, and also with memories of Alessandro Del Piero tearing up Serie A with top-corner curlers from the edge of the box.

It’s also pretty great that a 42-year-old Gigi Buffon is still knocking about.

But there’s also some… other stuff.

There was that 2006 relegation for match fixing, which saw the club stripped of two Serie A titles.

And there was the recent decision by the club to abandon its 116-year-old striped kit in favour of a half black, half white number.

The apparent justification for that move — that stripes are reminiscent of a referee’s outfit in American sports, and thus alienating to that potential fanbase — is as awful as it is hilarious.

Finally, there was that brilliantly thought-out tweet that shrugged off serious allegations against Cristiano Ronaldo because he was, er, a “great champion”.

The verdict on Juve: less cool than an actual old lady.

Paris Saint-Germain are trying really, really hard to be a global brand.

They’ve bought some of the best and most expensive players in the world, at least one of whom really doesn’t want to play for them, and they’ve done this Nike collaboration thing with Michael Jordan — targeting fans beyond football.

In reality, however, PSG are more Skechers than Air Jordan.

That’s partly down to their Qatari ownership, which has allowed the club to steamroller Ligue 1 opposition while sunnily promoting a dubious foreign regime.

Yet the team itself can be just as embarrassing.

Monumental Champions League collapses against Barcelona (2017) and Manchester United (2019) mean you don’t even fear or envy the mega-rich club.

You almost feel sorry for them.

As if that wasn’t punishment enough, etc.

But seriously, banishment from Europe (and, let’s dream for a moment, a wholesale retroactive stripping of titles?) would be more embarrassing than the Gallaghers still having those haircuts.

That’s not to say City haven’t done some cool things over the years though.

The Carlos Tevez billboard was obviously great banter, and — cynical ploy or not — the Hacienda-themed away kit is much better than United’s psoriasis-themed equivalent.

Back when you were young, the “bad” thing about Turkish opposition was fans setting off flares.

Today, you’ve got a club, Istanbul Basaksehir, whose close ties to Erdogan’s government give it actual villain credentials. (The chairman is married to Mrs Erdogan’s niece, for God’s sake.)

That’s a bad start, but the club also has on its payroll former Brazilian sensation Robinho, who has been sentenced to nine years in prison for sexual assault. Brazilian law means he can’t be extradited.

Sadly, Basaksehir recently terminated the loan contract of Arda Turan, whose own criminal activity involved firing a gun in a hospital after aggressively saying weird stuff to a pop star’s wife.

RasenBallsport gives you wings, but corporate ownership gives you a soulless football club like RB Leipzig.

Red Bull Salzburg are the same, only worse.