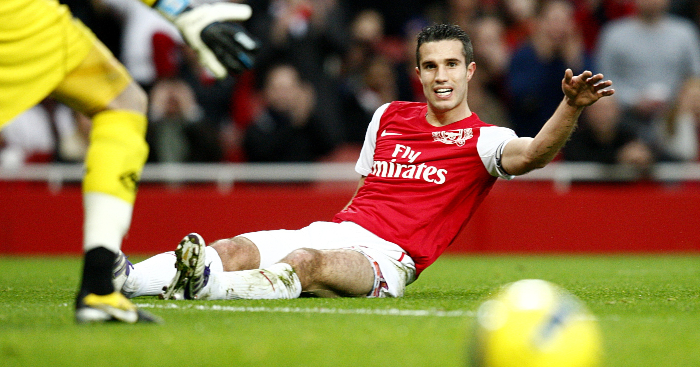 There’s a good chance you’ll already know that Gareth Barry has the most Premier League appearances, Alan Shearer has the most goals, and Richard Dunne – of course – has the misfortune of scoring the most own goals.

But there are several more statistics you might not know about. Who’s missed the most chances, who’s hit the woodwork the most times, who’s made the most tackles?

These ones are a lot less likely to come up in your local pub quiz. The Premier League’s official website has a treasure trove of all kinds of stats, but using the Opta data which has been recorded since the start of the 2006-07 season, here are the leaders in the various different categories.

But he can consider himself unlucky it wasn’t a fair few more. The Dutchman hit the woodwork 44 times in his Premier League career, 12 more times than anyone else since 2006, with Sergio Aguero second on 32.

Unsurprisingly for a player that’s totted up so many minutes, Barry tops many different lists. And what’s extra impressive is that he made his debut for Aston Villa a full eight years before Opta started recording these stats and hasn’t played in the Premier League for the past 18 months.

Wayne Rooney has been dispossessed more than any Premier League player since 2006 having lost the ball 671 times for Everton and Manchester United.

Wilfried Zaha is in second place and still has plenty of time to move into the top spot. He’s lost the ball 606 times and surely has lots of years ahead of him.

There’s a certain degree of logic that the 2010s Premier League top scorer Sergio Aguero has also missed the most ‘big chances’ according to Opta. He’s had the likes of David Silva, Kevin De Bruyne and Bernardo Silva feeding him chances for years.

The Argentine is way out in front, in fact, having missed 121 big chances, with Romelu Lukaku behind on 86. Aguero is proving a little more clinical this season, though – five strikers have missed more chances than him so far in 2019-20.

Sebastian Larsson scored 11 goals from free-kicks across his Birmingham and Sunderland spells in the Premier League.

That puts him top, ahead of Cristiano Ronaldo who scored nine Premier League free-kicks for Manchester United.

Peter Crouch is king of the headers, scoring 10 more than any other player since 2006.

The 6ft 7in striker scored 40 goals from headers. Chelsea’s Olivier Giroud is in second place with 30.

The standout thing about this statistic is just how often Tottenham fans have seen their strikers flagged for offside over the years.

Emmanuel Adebayor leads the way, having been caught offside 328 times, but the rest of the top four are also former Spurs strikers: Jermain Defoe (314), Darren Bent (276) and Dimitar Berbatov (238).

Clearances off the line

Joleon Lescott has made more last-ditch clearances than any other Premier League defender since 2006. The former Man City man registered 13 appearances off the line, putting him just ahead of Titus Bramble (12).

Petr Cech has more clean sheets than any other Premier League keeper since Opta started recording the stats – 161, which doesn’t even factor in the many he kept in Chelsea’s back-to-back title wins between 2004 and 2006.

Watford’s Ben Foster – particularly busy this season – comes out on top in terms of saves. He’s made 1,104 since 2006 – 99 more than Cech in second place. Heurelho Gomes and Rob Green have saved the most penalties – nice apiece.

Joe Hart is the most prolific puncher of the ball. He’s punched it out 269 times.

Asmir Begovic has committed more mistakes that have led to a goal than any other keeper – 27.