Bruno Fernandes has made an instant impact at Manchester United, becoming one of the most prolific and creative players in Europe.

Fernandes joined United from Sporting Lisbon in a £47million deal in the January transfer window and made his debut against Wolves on February 1.

We’ve looked at the players in Europe’s top five leagues with the most goals in all competitions since that date to see how they compare.

Despite infamously struggling on loan at West Brom from Arsenal, Gnabry has developed into one of the best wingers in the world at Bayern Munich.

The 25-year-old helped Bayern win the domestic double and reach the Champions League final by providing 11 goals and five assists since the start of February.

Silva went 10 games without a goal for Eintracht Frankfurt before finding the back of the net against FC Augsburg in February.

The striker then followed that up with another 12 goals and three assists before the end of the season.

Muller found himself frozen out of the Bayern Munich team under Niko Kovac in the first half of the 2019-20 season but has been reinvigorated since Hansi Flick took charge.

He has seven goals and 10 assists in his last 22 appearances in all competitions, including two goals and an assist against Barcelona in the Champions League quarter-final.

Immobile has enjoyed his most prolific campaign in front of goal and won the European Golden Shoe in 2019-20.

The Lazio striker has only made 17 appearances since Fernandes’ United debut, but he has still contributed 13 goals and four assists in that time.

Lukaku fell out of favour under Ole Gunnar Solskjaer at Manchester United and completed a £74million move to Inter Milan in 2019.

The striker finished his debut season in Italy in excellent form, registering 16 goals and two assists in all competitions since the start of February.

The speed of Romelu Lukaku! 💨🍃

There was no stopping the Belgian who is on red-hot form! 🔥

Havertz endured a slow start to the 2019-20 season with Bayer Leverkusen but the 21-year-old has been in incredible form in recent months.

He has provided 13 goals and six assists in his last 22 appearances for the Bundesliga side. No wonder Chelsea are so keen on signing him.

Ronaldo was criticised for not reaching his own lofty standards in the first half of the campaign but has exploded into form in 2020.

The Juventus forward continues to break new records and registered 17 goals and three assists in his final 20 appearances in 2019-20.

Fernandes hit the ground running after moving to Old Trafford in January and helped transform United’s fortunes on the pitch.

The midfielder has scored 12 goals in his first 22 appearances for the club while also providing eight assists for his teammates. 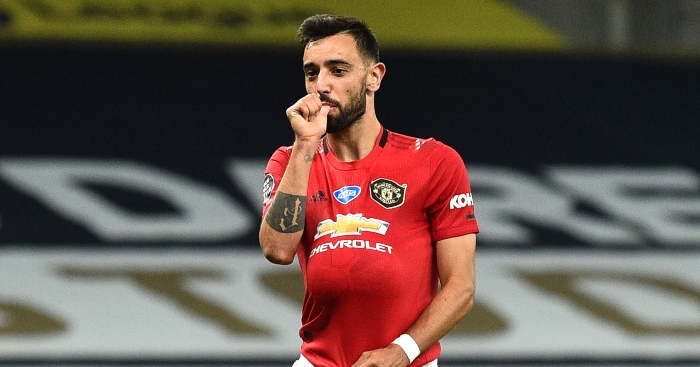 It has been a season to forget for Barcelona, but Messi hasn’t let his standards slip and continues to show why he’s one of the greatest footballers of all time.

The Argentina international has 12 goals and 15 assists in all competitions since the start of February and that would normally be enough for top spot….

If the Ballon d’Or was going ahead as usual in 2020, there would surely only be one winner.

Lewandowski is currently in the form of his life, contributing 23 goals and six assists in his last 19 appearances for Bayern Munich in all competitions.