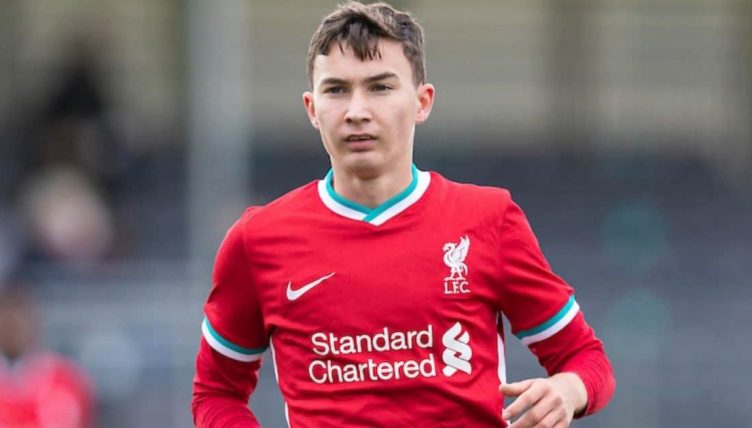 Despite only being 17 years old, Mateusz Musialowski is already making waves at Liverpool and could soon become a household name.

According to the Daily Mirror, Jurgen Klopp wants Musialowski and other young players to show he doesn’t need to spend big on high-profile names this summer.

Musialowski is one of Europe’s most exciting young talents, and we’ve brought you the lowdown on the Liverpool prospect.

Born in October 2003, Musialowski joined his local side Ajaks Czestochowa at the age of five before moving to Polish top-tier side Rakow Czestochowa four years later.

After a short loan spell at Skra Czestochowa in 2015, he joined SMS Lodz and reportedly scored 130 goals in 80 appearances for them at youth level.

Despite interest from Ajax, Arsenal and RB Leipzig, he decided to join Liverpool in August 2020 following a week-long trial.

Musialowski scored eight goals in the Under-18 Premier League in 2020-21, including a stunning effort against Newcastle United that earned him Liverpool’s Goal of the Month award for March 2021. He is the first non-first-team player to win the award since Adam Morgan in 2013.

The 17-year-old also helped Liverpool reach the FA Youth Cup Final, with goals against Arsenal and Ipswich in the quarter-final and semi-final respectively.

He is yet to make his senior debut but recently put pen to paper on his first professional contract at Anfield and is now training with the first-team squad.

Musialowski has primarily been deployed on the left wing for Liverpool but can play anywhere across the front line as well as in an attacking midfield role.

The Poland Under-17 international has been compared to both Lionel Messi and Eden Hazard due to his playing style and brilliant dribbling ability.

After Sadio Mane showed signs of slowing down in 2020-21, he will be hoping to eventually replace the Senegal international in Jurgen Klopp’s side.

– “I just ran with the ball,” Musialowski told Liverpool’s official website after his goal against Newcastle. “When I see the space, I just go for it. I have seen a lot of Lionel Messi goals like that, so I try to be like him and I want to repeat it.”

– “That was my typical goal in Poland,” he later added when reflecting on the Newcastle goal. “For some, it could be difficult but I find it easy when I am doing this on the pitch.

“I love to take the ball, just dribble through everyone. This is my style of playing football. When I dribble (past) the first player, I feel more confident, but when I just start running, I just go. Coaches from Poland and here never told me to stop, so that’s why I continue!”

– “It’s a great opportunity and a great lesson,” he said of his brief promotion to first-team training in March 2021. “I played against some of the best players in the world, so it was an amazing experience. This is definitely the place I want to be and I will do everything to stay in this place.”

🚨 NEW: Mateusz Musialowski is likely to make the step up to the U23s next season following an electric debut campaign at U18s level last season. #awlive [the athletic] pic.twitter.com/ghz64QLXC8

– “He’s so skilled with the ball at his feet,” Liverpool team-mate Jarell Quansah said in May 2021. “Trying to get it off him is very tough, and he’s one of the best dribblers I’ve come up against.

“I can’t think of anyone who is better than Mateusz [at Under-18 level] so I have full confidence Mateusz and [James] Balagizi are some of the best players in the country at this point.”

– “To train with, he’s very technical and it’s very difficult to get the ball off him,” a youth-team player told The Liverpool Echo. “The ball seems to stick to his feet, and he is very fast and agile too. He has a really good attitude as well.”

– “I didn’t want to scare them,” Ipswich Town coach Kieran Dyer said when asked why he hadn’t shown his players too many clips of Musialowski before the FA Youth Cup semi-final.

– “We don’t have many players like him who are fearless on the pitch and can dribble past two or three players,” Przemek Soczynski, a UK-based scout for the Polish FA, told The Athletic in March 2021. “He’s not a player Polish people are used to. He’s got the wow factor. A lot of people do call him the Polish Messi. A lot of people are very excited about him.”

– “What can I say? He was still a child but you could stand for hours and watch him play football,” Krzysztof Lazik, a former youth coach at Rakow Czestochowa, told The Athletic in March 2021.

“Mateusz has always stood out from his age group and even higher. At the club, he often played with the older groups. Compared to his peers, Mati was a player distinguished by his speed, technique and tenacity.”