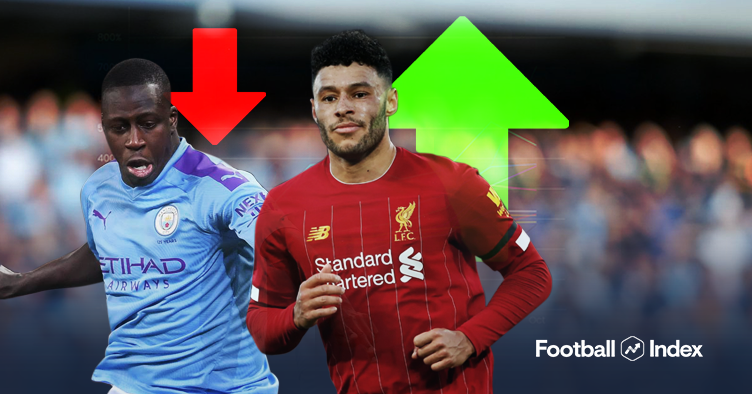 It was a good November for Liverpool, Leicester City and Tottenham in the Premier League – and that was reflected on Sign up for Football Index’s exclusive Planet Football reader offer and take advantage of their 7-day £1000 money-back guarantee. Sign up here. T&Cs apply, 18+, begambleaware.org., the world’s first football stock market.

Liverpool and Leicester both won all of their games across the month, while Tottenham appointed Jose Mourinho and subsequently won back-to-back games for the first time in the Premier League this season.

Arsenal on the other hand failed to win any of their games and sacked Unai Emery, while Manchester City lost at Liverpool and drew at Newcastle United to fall further off the pace at the top of the table.

Here are the top three price risers and fallers for every Premier League club in November.

Arsenal took only two points from their three games in November, but Lacazette scored both their goals in the 2-2 draw against Southampton to ensure he remained an attractive proposition for Football Index traders, with his share price rising from £1.51 to £1.62.

Torreira and Aubameyang also saw their prices rise slightly, but few Gunners players have been catching the eye.

Chelsea won their first two and then lost their last two Premier League games in November, but James’ promotion to the first team has seen his Football Index value rise from £1.97 to £2.79. Only four players saw their share price go up by more across the month.

Kovacic and Jorginho also proved popular with traders despite a mixed month for the Blues. Indeed, Kovacic is the sixth-highest riser behind James having seen his price go from just £0.73 to £1.51, meaning a return of almost 107% for traders lucky enough to have had the midfielder in their portfolio at the start of November.

With eight straight wins, Leicester have pulled clear of Manchester City to establish themselves as Liverpool’s main challengers for the Premier League title this season.

They are still eight points off the top and rank outsiders, but the Foxes’ players are understandably proving very popular with Football Index traders. Maddison and Chilwell were the third and fourth highest risers on the Index in November, while Vardy was the eighth highest riser having continued his scoring streak which now stands at an incredible 11 goals in eight games.

The striker may be 32, but he – quite literally – shows no signs of slowing down and is five goals clear in the race for the Premier League Golden Boot.

At the start of 2019, Alexander-Arnold shares on Football Index were priced at £1.21. By December 1 they were £6.58, an astonishing rise of 444% which really highlights why more and more fans are starting to put their knowledge to good use on the first football stock market.

Oxlade-Chamberlain is also interesting plenty of traders as he continues his impressive comeback from injury, while the ever-excellent Wijnaldum is going increasingly less under the radar.

Three of Liverpool’s most high-profile stars, however, saw their prices fall for various reasons, though traders holding shares in that trio will no doubt be confident those are temporary drops as the Red juggernaut continues to roll on.

Sometimes, players get better in the eyes of supporters the less they play, and that may well be true of Pogba, who hasn’t played since September yet saw his Football Index share price rise from £5.78 to £6.05 in November.

Traders may also be starting to think about the January transfer window – Pogba is sure to be featuring regularly in the gossip columns again, and that may well mean media dividends for those holding shares in the Frenchman.

Whenever a new manager takes charge at a club, there are winners and losers within the squad. And so far, Alli is definitely a winner having been moved to No.10 by Mourinho and responding with an assist and then two goals in his first two games under the Portuguese.

In the space of just one month, Alli saw his share price on Football Index rise from £1.74 to £3.22, an 85% increase. Anyone holding shares in Kane and Aurier were also big beneficiaries, and a 5-0 win over Burnley suggests Spurs might be a good club to look at for value in the coming months.