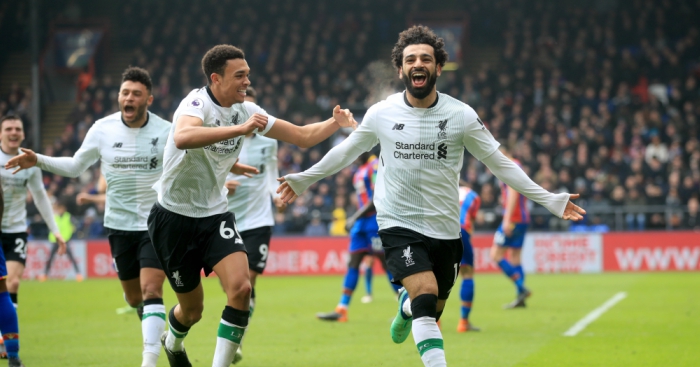 Liverpool forward Mo Salah has equalled the Premier League record scoring in the most games in one season, with six games still left to play.

Salah’s match-winner against Crystal Palace means he has now scored in 21 games so far this term, equalling a record set by Crisitiano Ronaldo in 2007-08, and matched by Robin Van Persie in 2012-13.

His tally now stands at 37 goals in all competitions, and with 29 so far in the Premier League, he will set a new scoring record for goals scored in a season if he scores in each of the remaining six fixtures.

Andy Cole and Alan Shearer share the current record, having each scored 34 goals in one season – though those were in 42 match seasons. Luis Suarez is one of three players to reach 31 goals in 38-game seasons, a record which Salah looks a sure bet to break.

Here’s every one of the 21 Premier League games he has scored in so far this season.

Salah opened his account for Liverpool on the season’s curtain-raiser, scoring Liverpool’s third before Miguel Britos equalised in the third minute of stoppage time.

Arsenal’s problems for the season ahead were highlighted as early as the second game, Salah scoring and adding his first assist of the campaign in a 4-0 rout, just days after opening his Champions League account in the qualifying win over Hoffenheim. 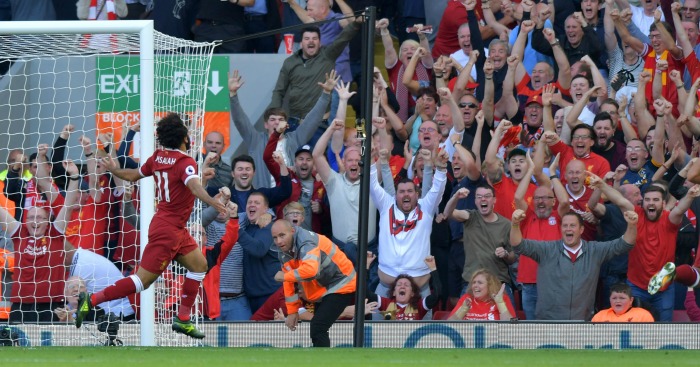 Manchester City handed Jurgen Klopp’s side a 5-0 thumping, before normal service was resumed as Salah scored in a Champions League draw with Sevilla and netted a first-half equaliser against Burnley.

Salah opened the scoring as Liverpool scraped past struggling Leicester, before failing to score in three consecutive appearances, 1-1 draws against Spartak Moscow and Newcastle before a drab 0-0 against Manchester United.

Two goals and an assist in a 7-0 rout over Maribor preceded defeat to Tottenham at Wembley, when his golden boot rival Harry Kane scored twice – though Salah did make it 2-1 in the first half.

The Egyptian claimed his first Premier League brace as he opened and closed the scoring away at West Ham.

A second successive brace followed the international break, with two first-half goals putting his side in control against Southampton, Liverpool becoming the first side to put three past future signing Virgil Van Dijk this season.

Salah’s 10th of Premier League season, and 15th in all competitions, put his side in front against top-four challengers Chelsea, only for Willian to equalise late on.

Another brace took Salah to seven goals in his last four Premier League appearances. A 5-1 win at Brighton followed by a 7-0 rout over Spartak Moscow – which Salah scored in – meant Liverpool netted three or more goals in eight out of nine successive games.

Salah looked to have handed his side all three points in a snowy Merseyside derby, only for a controversial late penalty to hand Sam Allardyce’s men a share of the spoils.

Liverpool’s front three of Coutinho, Firmino and Salah all netted in a rout over Bournemouth.

Salah scored Liverpool’s second against Arsenal which looked set to seal victory, only for the hosts to net three in the six minutes immediately after the Egyptian’s goal. Only a late goal from Firmino salvaged a draw – with all three attackers netting for the second game in a row.

A second-half Salah brace saw Liverpool come from behind to defeat Leicester, who had led at Anfield thanks to Jamie Vardy’s strike in the third minute.

Salah scored and assisted in Manchester City’s first and only defeat of the season – and by far the best game on the campaign so far. 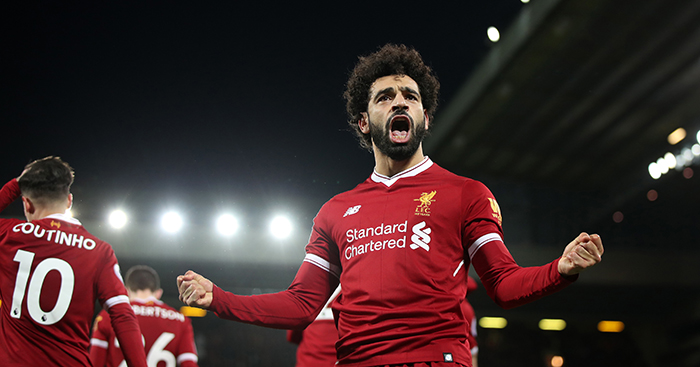 READ: A tribute to Mo Salah, his unpredictability & his incredible ability to get chances

Liverpool came crashing down to Earth with defeat at Swansea before being dumped out of the FA Cup by West Brom, but returned to winning ways as Salah’s penalty rounded off a comfortable win at Huddersfield.

A brace brought up Salah’s 20th and 21st goals of the season, but a frantic finish saw the 25-year-old seemingly give Liverpool the win, only for Kane to net a 94th minute penalty on a controversial call.

Salah and Firmino scored and assisted each other as Klopp’s men cruised to victory over Southampton once more.

An unplayable Liverpool destroyed West Ham at Anfield, with Salah setting up Emre Can for the first before scoring the second.

With goals in the Champions League and FA Cup, Salah continued a brilliant run of scoring in seven consecutive games in a victory over Newcastle.

As well as his four goals, he also claimed his 10th assist of the season in an utterly outstanding performance. 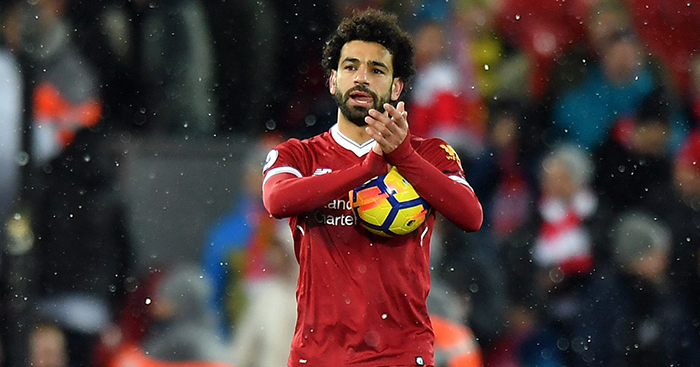 WATCH: 15 of the best GIFs about Mohamed Salah after another four goals

Salah controlled and finished Andrew Robertson’s cross to hand Liverpool the victory over Palace and briefly move them up to second in the table.