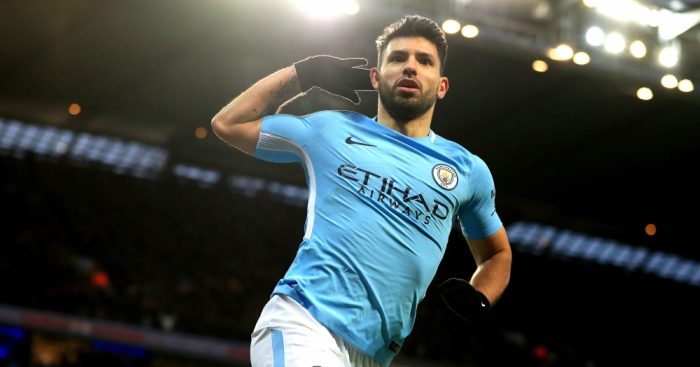 Sergio Aguero has consistently been one of the Premier League’s best goalscorers since joining Manchester City in 2011, bagging 143 goals in 206 appearances.

Aguero has also won three Premier League titles and collected the Golden Boot in 2015 thanks to 26 goals from 33 appearances – and yet this season is the first which has seen the striker be named in the PFA Team of the Year.

We looked back at who has been preferred to the Argentina international in past season and compared their respective campaigns.

Despite clinching the title with *that* goal against QPR, Aguero missed out to Wayne Rooney and Robin van Persie.

Rooney produced the best Premier League return if his career with 27 goals, while Van Persie won the Golden Boot with 30 goals and was named PFA and Football Writers’ Player of the Year.

In his seventh season as a Manchester City player, after previously winning the Golden Boot, scoring 199 goals, and bagging the most famous goal in Premier League history… Sergio Aguero FINALLY makes the TOTY! 🤪 pic.twitter.com/WyWfnTi2Ef

Aguero endured his least productive season for City, scoring just 12 Premier League goals in a disappointing season for the club, as Van Persie earned consecutive inclusions in the Team of the Year alongside Liverpool’s Luiz Suarez.

City regained the Premier League title with Aguero back on form, scoring 17 goals despite an injury hit campaign.

But Suarez struck up a devastating partnership with Daniel Sturridge at Liverpool and both were named in the Team of the Year.

Sturridge was in by far the best form of his career, scoring 21 goals in just 29 games a rate of 0.72 goals a game, while he also registered a career-best seven assists.

Suarez was the league’s standout player, winning both the Golden Boot and Player of the Year award thanks to 31 goals and 12 assists, meaning he was remarkably involved in a goal every 69 minutes.

Aguero won his first and so far only Golden Boot award in 2015 after scoring 25 goals in 33 appearances. However, it was Chelsea who won the Premier League, with the influential Diego Costa named in the Team of the Year alongside Tottenham’s Harry Kane.

Kane, meanwhile, enjoyed a breakthrough campaign, winning Young Player of the Year award after scoring 21 goals in his first full season in the Premier League.

👏 BREAKING: Sergio Aguero makes the PFA Team of the Year for the first time in SEVEN years after scoring 143 Premier League goals in 206 games

IT'S ABOUT TIME! #MCFC pic.twitter.com/Syc70Km5MW

Aguero was a bright spark in an otherwise average campaign for City, averaged a goal every 0.80 matches to leave him with 24 goals for the season. But his form was overshadowed by Kane and Jamie Vardy as Leicester City shocked the world by winning hte title.

Vardy, in just his second Premier League season, was a revelation, scoring 24 goals – a stunning volley against Liverpool being the pick of the bunch.

Kane’s tally of 25 came at a goal every 0.66 games, which was enough to give the England International his first ever Golden Boot award.

For the fourth time in six seasons Aguero hit 20+ goals in the Premier League, Kane was selected for a third successive season alongside Romelu Lukaku.

Lukaku enjoyed an impressive campaign with 25 goals and 6 assists, meaning he was directly involved in 50% of Everton’s Premier League goals.

Kane was again the league’s top scorer, averaging 0.97 goals a game to finish on 29 goals. He became only the third player to win three consecutive golden boots after Alan Shearer and Thierry Henry.