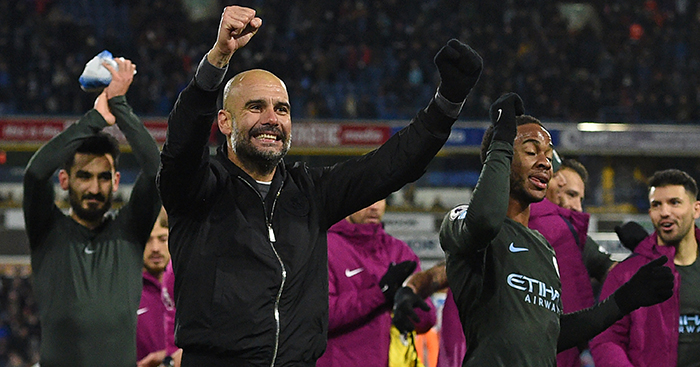 Pep Guardiola broke another record as Manchester City manager during his side’s 4-1 win over Dinamo Zagreb as they reached an impressive milestone.

His side have won back-to-back Premier League titles over the past two years and City’s success is mainly down to their ruthless streak in front of goal.

The Blues have now scored over half a century of goals under the Catalan boss since 2016, so we’ve looked at the stats behind the achievement.

– In comparison, Manuel Pellegrini’s City side scored 373 goals in 167 goals in all competitions, averaging 1.94 goals per game.

– The Blues have scored four or more goals in a game on 46 different occasions under Guardiola.

– City have failed to find the back of the net in just 18 games in all competitions since the start of 2016-17.

– Their 501 goals is at least 96 more than any other senior English side has managed since Guardiola was appointed in 2016.

– Sergio Aguero has been Guardiola’s main striker for City and the 31-year-old has scored 108 times over the past three-and-a-half years, which is more than a fifth of the goals under the Spaniard.

– Raheem Sterling is City’s second top goalscorer under their current manager with 73 goals. The winger had only scored 36 club goals in his career before Guardiola was appointed.

– Gabriel Jesus is third with 55 goals while Leroy Sane is fourth with 39 and David Silva sits just behind him on 31. Overall, Guardiola has had 28 different goalscorers during his time at City, not including own goals.