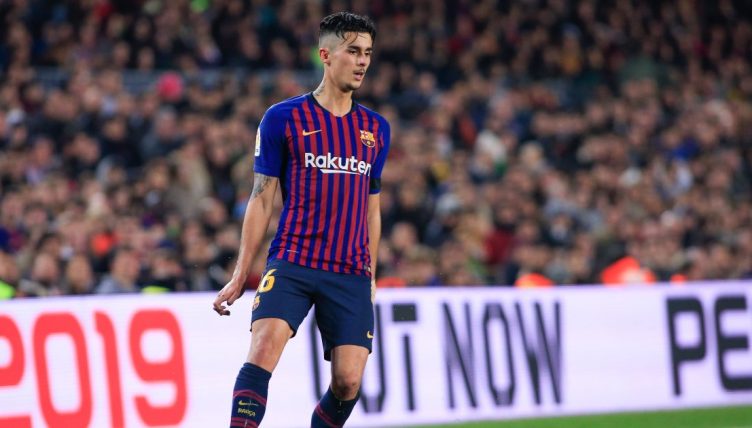 While Ansu Fati and Ilaix Moriba have recently established themselves in the Barcelona first team, other academy graduates have to forge careers elsewhere.

The likes of Hector Bellerin, Cesc Fabregas and Adama Traore all developed into senior Spain internationals after leaving the famous La Masia academy.

We’ve looked at the seven academy players who were released after the end of the 2019-20 season to see how they’ve fared since.

Jaime, who joined Barcelona aged eight, worked his way through the ranks and went on to captain the youth team in their UEFA Youth League success in 2017-18.

Despite being offered a new contract by the club, he wasn’t happy with the terms and decided to join La Liga 2 side Castellon on a free transfer.

The right-back made 11 appearances for his new side but fell out of favour after Juan Carlos Garrido replaced Oscar Cano in the dugout in January 2021.

He then spent the second half of 2020-21 on loan at third division side Gimnastic Tarragona, making a further four appearances.

The 22-year-old wanted to make a decision on his future after the promotion play-offs but Barcelona refused to offer him a short-term contract extension until the end of the 2019-20 season.

“It is the bitter moment of this season, the decision the club has made has hurt me,” Puig told Marca in July 2020. “The idea was to play the play-off and then see what happened.”

He joined Las Palmas on a one-year deal but never played for the first team and conceded 18 goals in 19 appearances for their reserve side.

Chumi made three first-team appearances under Ernesto Valverde and hit the headlines in January 2019, though it wasn’t in the way he’d have wanted.

Despite being suspended due to an accumulation of yellow cards in Segunda B, the defender was named in Barcelona’s starting line-up against Levante in the Copa del Rey.

Levante failed in their attempts tried to get Barcelona kicked out of the competition, but it still proved to be Chumi’s final appearance for the Blaugrana.

He signed a two-year contract with La Liga 2 side UD Almeria in 2020 and made 16 appearances in all competitions in his debut season, helping them reach the promotion play-offs.

While Ansu Fati has established himself as one of the most exciting young players in Europe, his older brother is yet to make a similar impact

He joined Vitoria de Guimaraes in October 2020 but is yet to make his debut for the Portuguese side.

Kabashi was the subject of plenty of hype in 2016 after being called up to the Kosovan national team at the age of just 16 amid comparisons to a certain Andres Iniesta.

As if living up to such comparisons wasn’t difficult enough, a month after receiving his international call-up, the midfielder suffered a serious knee injury, sidelining him for 18 months. Upon his return, he suffered the same injury, and his subsequent return was again blighted by another issue just seven minutes into his comeback.

Barcelona stuck by the youngster, extending Kabashi’s contract until the end of the 2020-21 season while he was still recovering, but he ultimately joined Villarreal’s C team ahead of the campaign, competing in the regionalised lower leagues of Spanish football.

Despite being linked with Leicester City and Borussia Dortmund, Saverio decided to remain in Spain and joined Osasuna on a free transfer.

The winger made his senior debut in December 2020, starting and scoring in a 6-0 away win against UD Tomares in the Copa del Rey.

After sitting on the bench in La Liga, he completed a loan move to FC Andorra, a third-tier side owned by Barcelona defender Gerard Pique.

The 22-year-old struggled to make a major impact during his loan spell, scoring one goal in 12 appearances in the second half of the season.

📸| Gerard Piqué talking with Kike Saverio, who formerly played for Barcelona B and was recently signed by FC Andorra.

The writing was on the wall for Sala when he was not registered as part of the squad for the Segunda B campaign, and he was released in January, joining Girona’s B team on a free transfer.