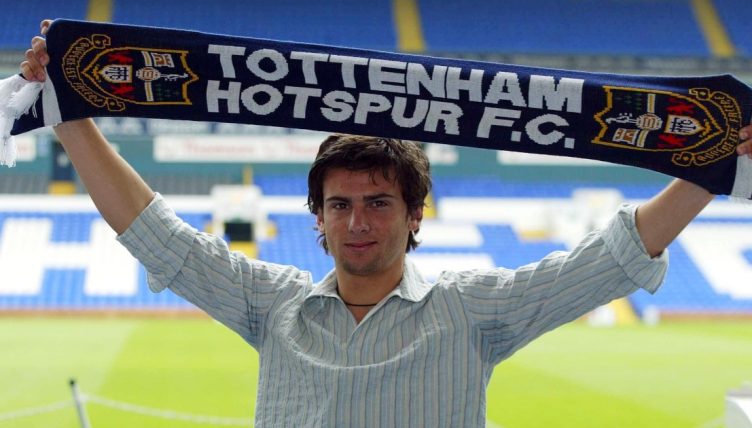 Tottenham fans often get frustrated with Daniel Levy for not spending enough money – but they also know better than most sets of supporters that spending money doesn’t always guarantee success.

There are times when Levy’s negotiating skills earn him nothing but praise, such as when he convinced Stoke to pay £18million for Kevin Wimmer. On other occasions, however, his tight grip on the club’s finances is rather less celebrated.

A look at how some of Spurs’ big-name signings down the years have flopped, though, perhaps sheds some light on why Levy is sometimes reluctant to enter the transfer market…

Fresh from playing an important role in Porto’s dastardly UEFA Cup win at Celtic’s expense, Postiga was snapped up by Spurs in the summer of 2003 despite attracting interest from Europe’s biggest clubs.

“He is a player who will add definite striking quality to our squad and is a young player of proven ability,” beamed Glenn Hoddle as the handsome youngster did a few kick-ups on the White Hart Lane pitch at his unveiling.

“I’m sure our supporters will enjoy watching him over the coming seasons.”

Alas, Postiga’s time in north London lasted just the one as, after a campaign which yielded two goals from 24 games, he returned from where he came.

Brought in from Valencia for £26million in 2013 before Gareth Bale had made his then-world-record switch to Real Madrid, Soldado had serious pedigree having netted 59 goals in 109 La Liga matches for Los Che.

It started well enough as Soldado swept home the winner from the penalty spot on his debut against Crystal Palace, but things rapidly turned sour as the Valencian’s goal-scoring instinct deserted him completely.

The nadir of Soldado’s ill-fated career in England came in Florence when after being put through on goal he attempted to square to Nacer Chadli, only to end up passing the ball straight to Fiorentina goalkeeper Neto instead.

On the plus side, the abject failings of both Soldado and Emmanuel Adebayor left Pochettino with no choice but to turn to the eager Harry Kane early on in the 2014-15 season.

What a career Paulinho has had. Starting off in the backwaters of the Lithuanian and Polish top divisions, he returned home to Brazil, rising the football pyramid before earning international recognition off the back of his performances for Corinthians.

In three seasons with Corinthians, Paulinho won four trophies, including the much-coveted Copa Libertadores, but it was his form for Brazil during the 2013 Confederations Cup that persuaded Spurs to part with £17million to sign him.

Named the third-best player at the tournament, Paulinho seemingly had the world at his feet. Unfortunately, he failed to settle in a Spurs shirt, showing only fleeting glimpses of his ability.

He’s done alright since flopping at White Hart Lane, earning a shed-load of cash in China and winning the domestic Double during a gap-year in Barcelona – but this shot, if you can call it that, against Burnley rather summed up his time in north London.

Recent transfer windows have been relatively tame for Spurs, but the summer of 2008 was too hectic if anything. In total, there were eight incomings and 11 outgoings at White Hart Lane during Juande Ramos’ only pre-season in charge.

Spurs’ most expensive recruit (inexplicably ahead of Luka Modric) was ex-Arsenal youngster David Bentley, who joined from Blackburn for £17million. Touted as the ‘next David Beckham’ at the time, Bentley was expected to become a key player at the Lane.

Ultimately, he struggled to convince Ramos’ successor Harry Redknapp of his worth.

A frankly ludicrous goal against Arsenal aside, Bentley’s most notable moment was pouring an ice bucket of water over Redknapp wearing just his pants, and nicking his agent’s watch with this shot into a skip from a roof.

Another from the 2008 vintage. Tongues were wagging when Spurs secured the services of Giovani Dos Santos for just £4.7million a matter of months after he was earmarked as Ronaldinho’s natural successor at Barcelona.

Dos Santos was Lionel Messi before even Messi was Messi. He was meant to be the next big thing out of La Masia, a technically perfect gem of an attacking midfielder with a tin opener for a left foot.

In hindsight, perhaps Spurs should have been suspicious that they were acquiring a supposed world-beater for peanuts. A failure to settle and question marks over Dos Santos’ professionalism hindered his progress. He was even sent to Ipswich on loan.

If there is one thing that Levy ain’t, it’s extravagant. Which is why his decision to part with £16.5million to sign Darren Bent from Charlton in 2007, at a time when Spurs had Dimitar Berbatov, Robbie Keane and Jermain Defoe on the payroll, was particularly odd.

Bent’s stock was high at the time in fairness. In two years at The Valley, he had scored 31 Premier League goals and emerged as an England player, but stylistically he just wasn’t the right fit for Spurs.

He lacked the genius of Berbatov, the link-up play of Keane and the ruthlessness of Defoe, but within a year he had risen from fourth to first-choice striker after the trio had all moved on.

Despite top-scoring for Spurs in the 2008-09 season, Bent never fully convinced, and after Redknapp mocked him for missing a sitter against Portsmouth by saying his “missus could have scored that”, the writing was well and truly on the wall.

A transfer so long ago that it even pre-dates Levy’s association with the club, this was a deal that caused shockwaves as one of Europe’s deadliest strikers plumped to join a then-middling Premier League outfit.

Nowadays, £11million won’t buy you much but, back in 2000, it was big bucks. Rebrov warranted such a fee after plundering goals for fun alongside Andriy Shevchenko at Dynamo.

Somewhat predictably, the pragmatic George Graham sucked the life out of Rebrov, and he was unable to recapture anything near his top form during a desperate two-year stint with Spurs.