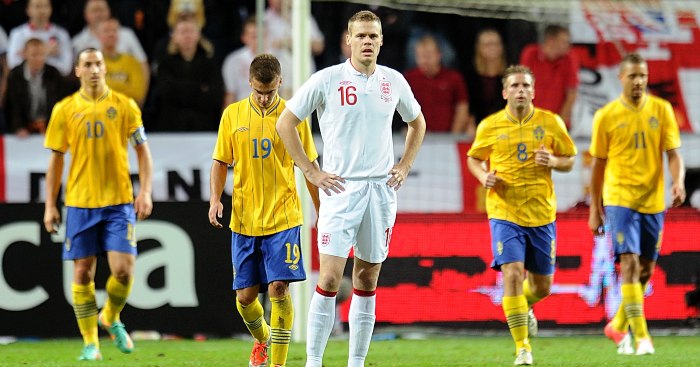 Throughout the 2000s, England had a ludicrous wealth of talent at centre-back to choose from, including the likes of John Terry, Rio Ferdinand, Sol Campbell, Ledley King and Jonathan Woodgate.

Of the central defenders to make their Three Lions debut since 2010, only five have won 10 caps or more: Gary Cahill, Chris Smalling, Phil Jones, John Stones and Harry Maguire.

We’ve taken a look at the seven other centre-backs to make their debuts this decade who have failed to reach the 10-cap mark.

After Rio Ferdinand was ruled out of the 2010 World Cup through injury, Fabio Capello selected the uncapped Dawson as the Manchester United man’s replacement.

While the defender played in an unofficial warm-up game against the Platinum Stars, he didn’t win his first official cap until after the tournament, in a friendly against Hungary, while his first competitive start came in a Euro 2012 qualifier against Bulgaria in which he was stretchered off after 56 minutes.

One cap. One goal. What more can you ask for?

Fun fact: When Caulker was taken off 74 minutes into his only cap for England, the Three Lions were beating Sweden 2-1.

Fun fact: After Shawcross replaced Caulker with 16 minutes remaining, Zlatan Ibrahimovic scored a hat-trick and England were beaten 4-2. Shawcross never played for England again. He never even received another call-up.

Ryan Shawcross: "I'm the joke in my family because the 10 minutes I played for England, was ruined by one man” pic.twitter.com/TV2qH5I1b5

With nine caps to his name, Keane will surely reach the 10-cap mark at some point over the next year, although his most recent outing against Kosovo, in which he was at fault for their 34-second opener, hardly inspired confidence in the Everton man.

Another player who is likely to eventually pass that 10-cap barrier, Gomez would most likely have already done so were it not for some frustrating injuries at inopportune moments.

Southgate is clearly a big admirer of the 22-year-old, who has seven caps to his name, commenting after the Liverpool defender was named Man of the Match on his debut against Brazil in 2017: “I think his decision-making was outstanding.

“We know his athleticism is a real asset but to see his calmness in the face of such high-quality movement, dealing with through passes he had to read… superb.

“Joe has been one of the best young players in our system for a long time. He has come back from an ACL injury and showed great character and tonight he’s had a wonderful experience. It gives me plenty to think about.”

Eligible to play for Poland through his grandfather, Tarkowski never represented England at youth level but has two senior caps to his name, narrowly missing out on the squad for the 2018 World Cup before later withdrawing from the standby list to undergo a hernia operation.

The Burnley man missed out on the latest squad, telling the Lancashire Telegraph: “I have not made it, which is obviously disappointing, but that shows I still have to work to do and I will be working as hard as ever to show that.

“I am sure the England manager will be watching me amongst many other players, I have just got to keep performing and show what I can do.”

Dunk received his first call-up to the senior squad as a replacement for Tarkowski ahead of the Nations League fixtures against Spain and Croatia in October 2018, but the Brighton captain had to wait until the following month before winning his first cap against the USA.

It remains his only cap to date, and Tyrone Mings appears to have overtaken him in the pecking order judging by the most recent squad.