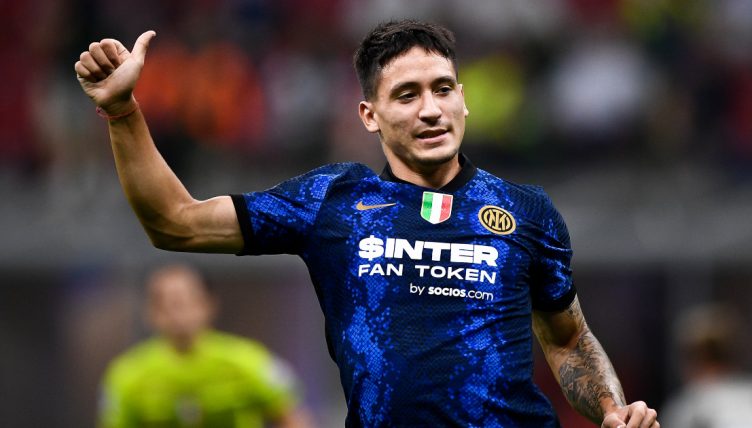 Inter Milan are not just one of Italy’s most famous clubs but one of Europe’s as well.

The Serie A champions look on course to retain their 2021 title which they won under Antonio Conte, ending Juventus’ nine straight victories.

Now with Simone Inzaghi at the helm, Inter are also through to the Champions League Round of 16, despite seeing stars like Romelu Lukaku and Achraf Hakimi leave with their manager in the summer.

They provide an enticing option for Football Manager players, who will have to navigate the club’s finance issues whilst still trying to maintain domestic dominance and compete in Europe.

Just like in real life, if you decide to take over at Inter you should be prepared to take a risk on the youth players already at the club in order to save some money and stick to the club’s philosophy.

So here’s a look at the seven wonderkids already at Inter at the start of Football Manager 2022, according to FM Scout.

Zefi is an Irish youngster who was picked up by Inter from Shamrock Rovers in August 2021.

The 16-year-old is already flying high in Inter’s youth teams and is able to play up front, on either wing and behind the main striker.

In-game he has 13 in dribbling, acceleration and natural fitness while 12 finishing is also impressive for such a young age.

He has good potential and would be worth trying to give regular game time to a couple of seasons in.

Listed as a defensive midfielder in the game, Agoume is currently on loan at Brest and is able to play across a variety of midfield positions.

The 19-year-old has captained various French teams at an under-age level and is a highly rated talent, possessing bags of technical ability.

He has already made his senior debut for Inter, who poached him from Sochaux when Agoume was just 17.

Don’t be surprised if he breaks through for the Nerrazurri next season.

On loan at Dutch second division side Volendam, Oristanio is capable of playing up front, on the wing or as a number 10.

He is just 19 years old but has been trusted with being a regular starter in the Netherlands for a side pushing for promotion. He has scored three goals so far.

15 technique and 14 long shots in the latest version of FM signifies he is an exciting player and after another loan, perhaps in Italy, could be a good player for Inter.

The standout talent in Inter’s current primavera is Gaetano Oristanio.

Born in 2002, he’s a winger/attacking mid with a great left foot
pic.twitter.com/Vc8LIkhJfB

Another midfielder, Iliev is a crucial player to Inter’s Primavera (their main youth team).

The 17-year-old Bulgarian has notched up an impressive four goals in 11 appearances from midfield in the main domestic youth league so far this season.

Such is his potential, he was included in the Guardian’s annual list of the 60 best wonderkids in world football last year.

He has already made his senior debut, making a handful of appearances for his childhood club Botev before Inter took him to Milan.

One to keep an eye on.

Uruguayan Satriano is currently the subject of several rumours, with Italian outlets linking him to Nottingham Forest among others.

There’s a good reason why the 20-year-old striker is heavily desired. He has broken through to the first team at Inter this season and made four appearances off the back of an impressive Primavera campaign last year.

If you’re managing Inter in FM22 you should give him some game time or find him a suitable loan to help develop his already decent 14 finishing, 15 stamina and (most importantly) 15 determination.

If you’re managing someone else, try and prise him away from the Italian wonderkids.

Agoume so so good and the turn and finish from Satriano even better, we cooking boys pic.twitter.com/fh9u35a21m

A Football Manager legend already, and very possibly an Inter one in the making in real life.

If you’ve played any edition of Football Manager over the past couple of years you will know Esposito is consistently one of the best wonderkid strikers in the game.

In real life, the 19-year-old is currently on loan to Basel in the Swiss league and has four goals and two assists in nine league appearances.

A serious talent, remember the name.

Another player who has been excellent in recent editions of Football Manager is Eddie Salcedo.

Capable of playing as a striker or on the left wing, Salcedo is an exciting prospect but he has not been around Inter much since signing for them in 2019.

The 20-year-old was loaned out to Hellas Verona and spent two seasons there before going to Spezia on loan for the 2021-22 season.

His physical stats in-game are impressive, with a 15 in natural fitness the pick of the bunch. An exciting talent, but one with plenty to prove in real life.