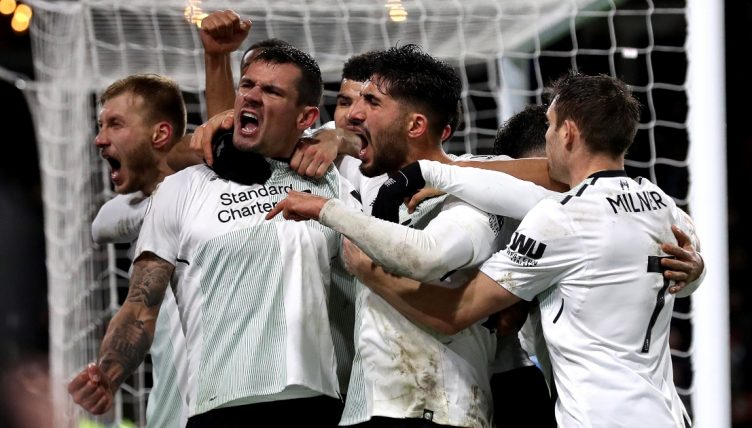 Since joining Liverpool from Roma in 2017, Mohamed Salah has established himself as one of the first names on Jurgen Klopp’s team-sheet.

But he’s currently away at the Africa Cup of Nations and there have been a few other occasions where he’s missed Premier League games.

We’ve taken a look at the seven league games Salah hasn’t appeared in since the start of 2017-18 and how Liverpool fared without him.

After picking up a groin injury against Leicester City in Liverpool’s final game of 2017, Salah then missed the New Year’s Day clash with Burnley.

Liverpool, who were also without the injured  Philippe Coutinho, named a front four of Sadio Mane, Adam Lallana, Alex Oxlade-Chamberlian and Dominic Solanke.

Klopp’s side were not at their free-flowing best at Turf Moor but a moment of magic from Mane broke the deadlock in the 61st minute.

The hosts then looked to have earned a point when Johann Gudmundsson equalised with just three minutes of normal time remaining.

But centre-back Ragnar Klavan stepped up to become Liverpool’s unlikely hero, heading home in the 94th minute as the Reds snatched all three points.

“A fantastic finish to the game. This is one of the toughest places to play all season,” Klopp said after the game. “I like rotation, I love the quality of my squad and I am really pleased. It was not fantastic football but it was a fantastic attitude.”

Have a great day! 😄 pic.twitter.com/isj9kH3ebr

Salah got a goal and assist in Liverpool’s Champions League quarter-final first-leg win against Manchester City but was forced off the pitch with a minor groin injury in the second half.

Klopp decided not to risk the Egypt international for the Premier League game against local rivals Everton, leaving him out of the matchday squad.

The Liverpool manager clearly prioritised the Champions League and made several other changes to his side, naming Trent Alexander-Arnold, Roberto Firmino and Alex Oxlade-Chamberlain on the bench.

Both sides played out a grab goalless draw at Goodison Park and goalkeepers Jordan Pickford and Loris Karius were two of the only players to emerge with any credit from the game.

“A point is OK,” Klopp told BBC Sport after the game. “Everton were always ready to fight but we didn’t give them the opportunity until the late stages. We stopped playing football and were a bit lucky. But that is what we have to take. I think it’s an absolutely deserved draw.”

Salah then returned for the second-leg against City and scored in a 2-1 win at the Etihad.

Liverpool enjoyed a flawless start to their Premier League campaign in 2019-20, winning all of their opening eight games.

Salah got four goals and three assists in that run but missed their away game against Manchester United due to an ankle injury.

“It’s a difference, but not a massive difference,” Klopp said before the game. “Mo offers some runs in behind. Adapt the system, that’s how to do it. We’ve played without him before.”

Liverpool produced a below-par display at Old Trafford and Marcus Rashford gave United a surprise lead in the 36th minute.

The Reds saw a first-half strike from Sadio Mane ruled out by VAR for handball and looked set for their first league defeat since January 2019.

But substitute Adam Lallana met Andy Robertson’s cross and netted an equaliser for the away side in the 85th minute.

After missing the United game, Salah played in wins over Tottenham, Aston Villa and Manchester City but his ankle problem was aggravated by a challenge from Fernandinho.

The winger subsequently dropped to the bench for their trip to Crystal Palace and was replaced by Oxlade-Chamberlain in the starting line-up.

After Mane gave Liverpool the lead at the start of the second half, Wilfried Zaha thought he’d rescued a point for Palace with an 82nd-minute equaliser.

Salah remained as an unused substitute on the bench as Firmino grabbed the winner for Liverpool three minutes after Zaha’s strike.

An important winner from Bobby 😍pic.twitter.com/ZoMISxfrlP

Klopp decided to ring the changes when Everton came to Anfield in 2019-20, naming Salah, Firmino, Oxlade-Chamberlain and Jordan Henderson on the bench.

“One change we had to do in Adrian for Alisson, and the other four we wanted to do, just to respect the game, to respect the intensity of the game first and foremost,” Klopp said before the game.

“We did it because we can do it. I have to show the respect for the boys and I’ve said a lot of times how much I like the squad and now we have to use it.

“That’s the line-up for today because we think the game will be really intense and for this you need kind of fresh legs and we try to bring them in.”

Divock Origi and Xherdan Shaqiri were handed rare opportunities and didn’t disappoint, firing Liverpool into a 2-0 lead inside the opening 17 minutes.

After Michael Keane pulled a goal back for Everton, Origi got his second goal of the game and Mane extended their lead in the 45th minute.

Richarlison scored moments after Mane’s strike but Georginio Wijnaldum completed Everton’s humilaition with a goal in the 90th minute.

After the 2019-20 Premier League season restarted in June 2020, Liverpool’s first game saw them take on Everton at an empty Goodison Park.

But a small injury problem meant that Salah was only fit enough for the bench and Takumi Minamino was handed his first Premier League start.

Liverpool dominated possession in the derby but lacked a cutting edge without Salah in the side and only mustered three shots on target.

Everton nearly grabbed all three points in the closing stages when Dominic Calvert-Lewin was denied by Alisson and Tom Davies hit the post. Klopp decided to leave Salah on the bench and both sides shared a point.

“The front three are as good as anyone in Europe but whenever one of them is out, there is a massive drop-off,” Jamie Carragher said after the game.

Salah missed Liverpool’s home game against Leicester in 2020-21 after contracting COVID-19 while away on international duty with Egypt.