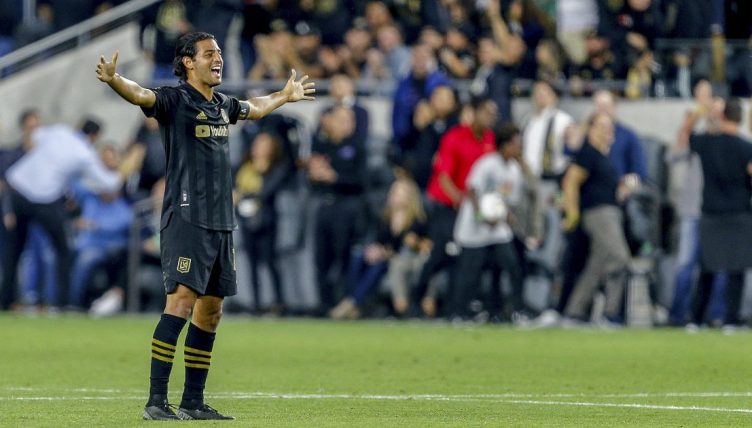 Carlos Vela was once considered one of the most exciting young players in the world while at Arsenal, but the forward’s career has not gone as expected.

In 2007, World Soccer magazine ranked Vela among the world’s most exciting teenagers, but the Mexican showed only flashes of his talent for the Gunners.

Now 33, Vela is starring for Los Angeles FC in MLS, and we’ve taken a look at how the attacker’s career has gone in a different direction to how it was originally anticipated.

Born to a father who had played football semi-professionaly, Vela was brought up also playing basketball, which remains one of his passions to this day.

After catching the eye of a number of top-flight clubs, he eventually joined Guadalajara, where his elder brother Alejandro also started his career.

Guadalajara had been convinced to sign Vela after he helped Mexico win the 2005 Under-17 World Cup, in which he finished as top scorer with five goals.

The forward spent just two years at Guadalajara, however, and had yet to make his first-team debut before Arsenal beat off competition to sign the player on a five-year deal in 2005.

Vela’s first taste of senior football came on loan at Salamanca in the Spanish second tier, and he quickly began to generate plenty of buzz.

He may have only scored eight times in 31 league appearances, but those who saw him at the time were convinced of his talent.

“He exceeded our expectations,” Javi Lopez, who managed Salamanca at the time, told Sky Sports. “He had an enormous amount of innate ability, but above all he was a boy who had a lot of confidence in himself.

“He knew he had weapons for football and he overcame all the challenges in front of him with relative ease.”

With work permit restrictions still meaning he was unable to represent Arsenal, Vela spent the whole of 2007-08 on loan at Osasuna, playing 33 times as he made the step up to La Liga, albeit returning only three goals.

At the end of the campaign, he returned to Arsenal ready to make his first-team bow, but it would not be the end of his time in Spain.

Upon his return to north London, Arsene Wenger compared the youngster to Eduardo, telling the club’s official website: “He’s so calm in front of goal and that always gives you a smile. He’s never in any stress.”

Like many Arsenal youngsters, Vela was first handed an opportunity in the League Cup and did not disappoint. On his first full start, in September 2008, he scored a brilliant hat-trick as the Gunners’ youngest ever side thrashed Sheffield United 6-0 at the Emirates.

He ended his debut season with six goals in all competitions and the future seemed bright, but he never truly managed to kick on and establish himself in Arsene Wenger’s starting XI.

Two goals in 20 appearances followed in 2009-10 and he was handed the No.11 shirt for 2010-11. By January of that season, however, Vela found himself on loan at West Brom, and his Arsenal career was as good as over.

Looking for a home

But, having failed to impress quite as expected in English football, Vela returned to Spain with a loan move to Real Sociedad ahead of the 2011-12 campaign.

With three goals before Christmas and Vela enjoying the familiar surroundings of La Liga, the player himself made it clear where he saw his future.

“I don’t want to return to Arsenal. I have asked my agent to negotiate with Arsenal to stay here.”

Ending the season with a career-best 12 goals, Vela got his wish as Sociedad made his loan deal permanent, and he went on to produce his best football for the club.

In 2012-13, he developed a brilliant partnership with Antoine Griezmann and helped the club qualify for the Champions League, while only Lionel Messi, Cristiano Ronaldo, Alexis Sanchez and Diego Costa bettered his tally of 27 goals and assists in 2013-14.

“He was at his best in the same team as Griezmann, but he didn’t reach the same levels in his final few seasons. Consistency was never his strength.

“He’s a player who, if he wanted, could have been in the top 10 in the world. But for him, the most important thing was just to be happy in his own way. He was happy with his life at Real Sociedad.”

One of the highlights of Vela’s career came at the 2009 CONCACAF Gold Cup, when he returned from injury to score the winning penalty in the semi-final victory over Costa Rica before inspiring his side to a 5-0 triumph over the USA in the final after coming on as a half-time substitute with the score still at 0-0.

For a player with 72 caps and an Under-17 World Cup winners medal to his name, however, it is a similar story for Vela at international level.

His 11-year career for Mexico, which ended in 2018, was punctuated by a three-year gap in which he failed or refused to appear for his national team.

In September 2010, he was suspended for six months after throwing a party following a game against Colombia, and he rejected a number of call-ups under two different managers afterwards, which led to the player missing the 2014 World Cup.

Vela emphatically returned in November 2014, scoring twice in a 3-2 victory over Holland in Amsterdam, and he was a key player in his country’s run to the 2015 CONCACAF Gold Cup final, only to miss the victory over Jamaica due to suspension.

In August 2017, it was announced that Vela’s spell in European football was coming to an end, as he agreed to become the first marquee player for the new MLS franchise LAFC.

“I’m going at the right time with the desire to try a new adventure, to be close to my country, where my family can visit more often, where I can go home more often, where I’ve always been drawn to the way they live, the way they let people live, how they think about football and all sports in general,” he told Real Sociedad’s official website at the time.

The move sees Vela’s life come full circle, as he is now closer to his family and can also indulge in his love of basketball more.

After a healthy return of 14 goals and 11 assists from 29 appearances in his debut campaign, he was on fire in his second, bagging 38 goals and 12 assists in 36 appearances.

While his 2020 campaign was stop-start in nature due to injuries and the pandemic, Vela thrived in the CONCACAF Champions League. Given the chance to play against Mexican club opposition for the first time, Vela scored against Leon, Cruz Azul and Club America as LAFC became the first MLS side to beat three Mexican teams in the same tournament.

But Vela was unable to inspire a fourth victory against Mexican opposition as LAFC were beaten by Andre-Pierre Gignac’s Tigres in the final, although he was still named in the Team of the Tournament.

But he scored just five goals in 20 appearances during the 2021 season, with LAFC finishing an underwhelming ninth, suggesting he might finally be slowing down.

Still, Carlos Vela may not have lived up to his early promise as expected, but he has played out his career on his terms, and it’s hard to argue with that.