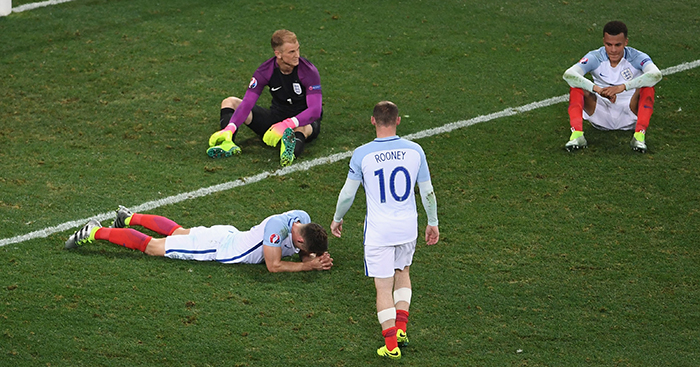 Football is a simple game. Twenty-two men chase a ball for 90 minutes and, at the end, England let you down.

The Three Lions haven’t reached the semi-finals of a major tournament in 22 years, while Michael Owen’s opener against Portugal in 2004 marks the last time they scored from open play in a tournament knockout game.

In theory, we should know better, and yet every time a tournament rolls around, England fans go through the same process.

Bizarrely, it’s pretty much a direct reverse of the seven stages of grief.

Regardless of the strength of the qualifying campaign, there will be a broad pessimism around the potential of this generation of players. And rightly so, considering the struggles of stronger squads in the past.

We tell ourselves we’ll be happy to make it out of the group stages, that we’re the underdog, and this is especially true after failing to even manage that in 2014.

This happens between the Champions League final and the first pre-tournament friendly, and is as relaxed as we’ll be throughout the entire tournament cycle.

How far do England go at the World Cup?

In fact, we’re so at ease with the inevitable that we’ve started to make other plans. We’ve agreed to go for a picnic on the day of England’s potential quarter-final, having convinced ourselves they’ll have already been eliminated by then.

Maybe we’ll even take up tennis or start jogging before work – the courts and roads will be clearer while everyone’s gearing up for the football.

We’re ready to enjoy our summer without getting too emotionally invested in something as stupid as a national football team.

Unfortunately this doesn’t last long. We’ll remember the wonderment of Euro 96 and Italia 90, and curse the fact that we’ll never have the chance to see our team come within touching distance of a trophy again.

We’ll wallow even more deeply when the squads are announced, especially when one of our favourite players misses the cut, but that only lasts until the pre-tournament friendlies, at which point we move onto…

A narrow, not wholly convincing win over an average team, is it? Guess it’s time to start making wildly ambitious promises to yourself.

By the time the first game rolls around, you’re convinced England will win the whole thing and you’ve mentally prepared to join a gym, start eating more healthily and enter a marathon when (not if) they do. There’s no way this can go wrong.

Oh, and you’ve decided to cancel those non-football plans – they can wait until after the tournament, when you’re basking in the inevitable glory and spending July in a country in permanent party mode.

There’s no fury like the fury of an England fan, six pints of cheap lager in, frothing at the mouth while inventing new swear words purely for the benefit of John Stones. This never would have happened if it wasn’t for all that stupid hope.

We’d love to say this is a knockout stages-only problem, but we all remember the shoeing Rob Green got in 2010. And Steven Gerrard in 2014. And Wayne Rooney in 2006.

I could go on, but no word limit would be high enough to detail every instance of World Cup-related fury on the part of England fans, and that’s before we get onto the European Championships in between.

This part’s easy to put into words. It’s the penalty shoot-out stage of England’s demise, which rolls around… oh, only ALL THE TIME.

The act of supporting England at a major tournament is, of course, not something that can be broken down into single moments. A penalty shoot-out defeat isn’t just one loss, it’s the culmination of condensed expectation all getting brought crashing down.

It hurts much more than an uncomplicated group stage exit ever could, to the point that you find yourself preferring the former in retrospect and wishing you hadn’t been so greedy as to believe you might deserve better.

Two weeks before the squad was named, you wouldn’t have considered England’s exit shocking in the slightest.

But then you had that narrow win, someone stuck ‘Three Lions’ on in the pub (96 or 98, it doesn’t matter all that much), and you made the tragic mistake of believing.

Suddenly the Bayern striker has pinged a hat-trick past Gareth Southgate’s Brave Boys™ and you’re stood there in disbelief, calling him a ‘BTEC Rickie Lambert’ for reasons only you know, scratching your head at the prospect of England doing what they always do and always will. 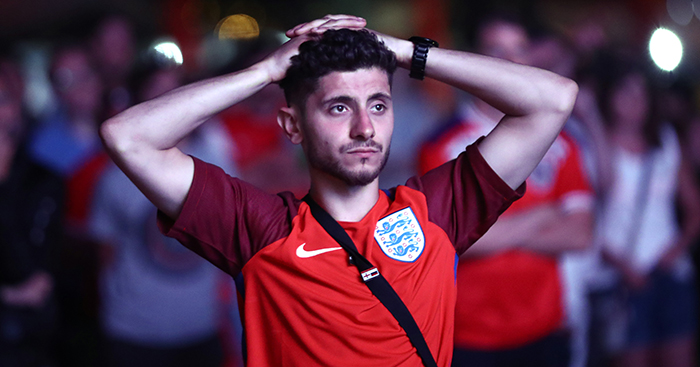 It was our time, you tell yourself.

It was never our time.

Now you’ve learned how this summer will go, it’s time to stop kidding yourself. Accept that England’s summer will be one of disappointment and save yourself the pain that comes with raised expectations.

Shit, probably should have posted this after the friendlies. This’ll only make it worse.