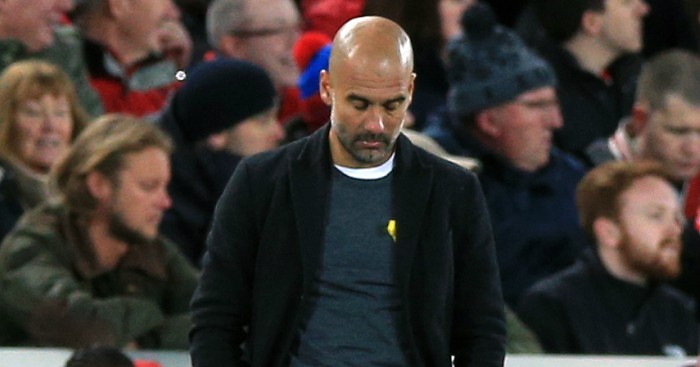 Manchester City face a mammoth task to overturn a 3-0 first-leg defeat to Liverpool to progress to the Champions League semi-finals – but does Pep Guardiola’s record suggest it is possible?

Only two teams have ever overturned a three-goal deficit in the second leg of a Champions League knockout tie.

In 2004, Deportivo were beaten 4-1 by AC Milan in the quarter-finals, only to triumph 4-0 in the return fixture. Last year, Barcelona famously beat PSG 6-1 at the Nou Camp after losing 4-0 in Paris.

Prior to Manchester City’s loss at Anfield, Guardiola had lost the first leg of a Champions League knockout tie on seven occasions – three times with Barcelona and four with Bayern Munich.

Only once has his side then gone on to also lose the second leg: Bayern’s 2014 defeat to Real Madrid.

Guardiola was in his first season in charge of Bayern, who were reigning champions having won the Treble the previous season.

Karim Benzema had scored the only goal of the game in Madrid, meaning the semi-final was hardly a foregone conclusion, but what followed was one of the biggest regrets in Guardiola’s career.

The Spaniard consulted his players to ask how they would like to approach the second leg, and as a result decided to go gung-ho.

Bayern went on to be humbled 4-0, and Guardiola is quoted in Marti Perarnau’s book Pep Confidential as saying: “I got it wrong man. I got it totally wrong. It’s a monumental f***-up. A total mess. The biggest f***-up of my life as a coach.”

Likewise, a Guardiola side has only drawn the second leg following a defeat on one occasion, as Barcelona somehow managed to let a two-goal lead slip against a 10-man Chelsea in a match best remembered for Fernando Torres’ breakaway goal.

Guardiola has inspired a win on five of seven occasions, but only twice has that resulted in his side progressing to the next round.

In 2010, his old adversary Jose Mourinho masterminded Inter to a 3-1 victory over Barcelona in the San Siro, with a typically cunning display in the second leg – in which Thiago Motta was sent off in the first half – seeing the Catalan giants win just 1-0.

Up against his former team with Bayern in 2015, Barca won 3-0 in the Camp Nou, meaning the Bavarian’s 3-2 win in the Allianz Arena was in vain.

And the following year, Bayern were made to pay for a 1-0 defeat at Atletico Madrid as Antoine Griezmann scored a crucial away goal as the German’s won 2-1 in the return leg.

That leaves the two occasions Guardiola has successfully overturned a first-leg deficit, albeit neither were by the margin City need to win by against Liverpool.

In 2011, Arsenal beat Barcelona 2-1 at the Emirates in a match famous for Jack Wilshere’s commanding display in midfield. In the Nou Camp, however, Barcelona triumphed 3-1, with Robin van Persie receiving a controversial red card.

Four years later, Bayern were given a scare by Porto, losing 3-1 in Portugal, only to make a mockery of that result by winning 6-1 to storm into the semi-finals.

On that occasion Guardiola stuck to his guns and kept faith with the same formation, as opposed to adopting his tactics in order to chase the game.

Having altered his formation for the first leg at Liverpool, however, it will be interesting to see how he chooses to combat the threat of the Reds’ attack, while also giving City the opportunity to claw back the tie.