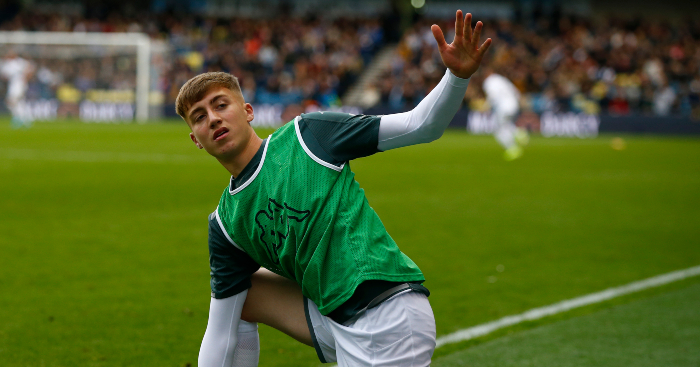 Tottenham have sent a number of promising young players out on loan this season – but it hasn’t been plain sailing for all of them.

A number of the prospects are prematurely back in north London, although there have been a couple of success stories.

We’ve taken a closer look at the seven players sent on loan by Spurs in 2019-20.

After spells on loan in League One and League Two, Amos impressed Mauricio Pochettino enough in the summer of 2018 to be handed his Premier League debut on the opening day of the season, only to suffer a serious knee injury a month later which ruled him out for the entirety of the campaign.

The midfielder is spending 2019-20 at QPR, scoring twice in 21 appearances in all competitions, making this already the most productive season of his career.

Not trolling luke amos is better than all our dms currently

Signed from Leeds United for around £10million in the summer, Clarke was immediately loaned back to Elland Road but made just a solitary Championship appearance before being recalled this month.

The winger was unfortunate in that Leeds were restricted in the number of loan players they could name in their matchday squad, with Clarke often the odd one out, but he has struggled to recapture the form he showed before collapsing on the bench at Middlesbrough last season.

Still just 19, Clarke has now been sent on loan to QPR, making his debut off the bench ironically enough in a 1-0 victory over Leeds this week.

Our resident Leeds fan Rob maintains Clarke could still turn out to be absolutely anything, by that he means either absolutely brilliant or in League One within three years.

Another player recalled early by Tottenham, Carter-Vickers spent the first half of the season on loan at Stoke City, his fourth loan move to the Championship.

To quote our Stoke-supporting editor Homzy: “Forgettable. Which, to be fair, in the context of Stoke’s season isn’t a bad thing for a centre-back. He had a couple of good games at right-back too, but 10 years from now he’ll be the one everyone forgets in a quiz on here.”

We sense a theme developing here. After being sent on a season-long loan to Doncaster Rovers, Sterling is now back in north London after injury and illness restricted him to just four appearances for the League One outfit.

Georgiou is another player back at Tottenham, but to be fair to the 22-year-old he only ever joined Ipswich on a six-month loan.

Having said that, 13 appearances without a start isn’t a great look.

Finally something of a success story, Marsh has proven a big hit at Leyton Orient in League Two, so much so the midfielder’s loan has been extended until the end of the season.

The 21-year-old has made 18 appearances in all competitions for the club, with his extension coming as a relief to supporters.

Credit to George Marsh today, he was everywhere as usual👏🏻Since he’s come back into the team we’ve looked a lot better in the middle. Really hope we can extend his loan because we’d be a lot worse off without him!

Yet to appear in a competitive game for Spurs, Roles has caught the eye on loan at Cambridge, scoring five times from midfield, with his strike against Macclesfield nominated for goal of the month shortly after he won League Two’s player of the month award for October.