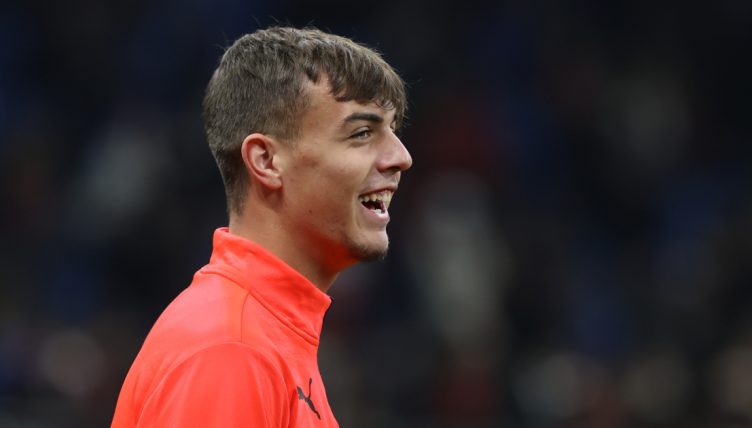 2021 has been the year that AC Milan finally made big strides towards being back at the summit of Italian football.

The Milan side are a brilliant option for a first Football Manager save, with the exciting goal of bringing the Rossoneri back to Italian and European glory.

They finished second in the Serie A last season, albeit some way off cross-city rivals and league champions Internazionale, and returned to Champions League football for the first time since 2013.

Stefano Pioli’s side has been rejuvenated as much by young players as the 40-year-old Zlatan Ibrahimovic who has made Milan his home.

But what about the youngsters at the club who could form the foundation of the club for years to come?

We’ve had a look at FM Scout to find all of the wonderkids at AC Milan that you could use in your FM save.

Yacine Adli has never played a game for Milan but looks promising to be a staple at the club in the future.

The 21-year-old creative midfielder signed for Milan from French club Bordeaux this summer but was sent back on loan to his old side for the 2021-22 season.

He is a week-in-week-out starter for Bordeaux and has notched up six assists in 19 Ligue 1 games so far this season.

The talent the young man possesses is clear and Milan were planning for the future when they signed him for around €8million.

A product of the PSG youth academy, Adli made his professional debut for the Parisians before moving to Bordeaux in 2019 in search of game time.

“You don’t have to think about it for very long when Paolo Maldini calls you up to say that a great club like Milan wants you,” Adli said when Milan signed him.

“It is such a source of pride for me, considering where I came from. I just couldn’t have ever imagined something like this happening.”

Compilation of Yacine Adli in 2021pic.twitter.com/dndukgowV1

At just 16 years of age, the fact that young talent Kevin Zeroli is considered a wonderkid on FM22 tells you how high the expectations are for this attacking midfielder.

Zeroli is playing with AC Milan’s youth side (Primavera) at the moment and is the side’s main creative force.

In the game, he’s been credited with a 14-rated first touch, passing, and technique at just 16. One worth keeping an eye on for the future.

Chaka Traore is considered a huge talent in the Milan Primavera side.

He’s a left winger and joined from the Parma youth ranks this summer for around half a million Euros.

The Ivorian has already trained with the first team and there have been calls for him to be included in match-day squads already, making Traore potentially the next youth player to break through the ranks at Milan.

At just 17 years old there are already plenty of jaw-dropping videos of the youngster online, including this hat-trick he scored within an hour against Pescara.

️⚽️️⚽️️⚽️ A hat-trick inside an hour.

19-year-old striker Lorenzo Colombo is currently on his second loan from the club, this time with Serie B side SPAL.

The young forward has already made his senior debuts in both domestic and European competition, being called up to the first team last season when the side struggled for depth up front.

He even scored his first senior goal for the club in a Europa League match with FK Bodo/Glimt.

Colombo has scored six Serie B goals in 17 games so far this season for SPAL who are struggling towards the bottom half of the table.

But the experience in senior football should stand the Italian in good stead as he tries to make it.

Didn’t this guy’s father and grandfather play a bit of football or something?

Yes, by this point you probably know that the son of legendary Milanese defender, and now director of football, Paolo Maldini is a senior player at the club where both his father and grandfather Cesare played.

Unlike his forebears, the 20-year-old Maldini is a midfielder and made his senior debut last year.

He has since gone on to play in the Champions League this season and made his full debut for Milan as well, scoring on his first-ever start against Spezia.

If you choose to play with Milan in FM22 make sure you try to develop Maldini as much as you can and continue his family’s unique legacy at the club.

Paolo’s lad, Daniel Maldini, made his first Serie A start for Milan today. Only went and scored, didn’t he?

His old man was there to see his goal. Just watch. Lovely stuff ❤️ pic.twitter.com/F4cy4EDE45

Leonardo Rossi is Milan Primavera’s main striker and an exciting prospect at 17.

Born in Rome, Rossi came to Milan from Roma’s youth system in 2018 with arguably the most Italian name you could have.

The young striker has struggled for goals so far this season, with just four in 21 appearances for Milan’s youth team.

But his FM attributes show he has a promising future.

He has 13 finishing and 14 concentration in the game, which means he has the foundations to be a solid squad option for your Milan side in the future.