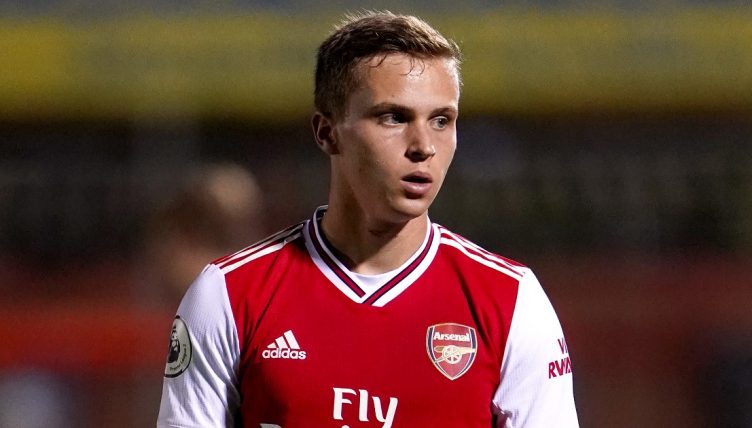 The 2020-21 season was one to forget for Arsenal fans, but on the plus side academy graduates Bukayo Saka and Emile Smith-Rowe came on leaps and bounds.

Sixteen other former Arsenal academy players played elsewhere in major leagues, which raises the question of whether they’ve allowed any talented youngsters to slip through the net and depart too soon.

Here are the six academy players that Arsenal allowed to leave last summer, and how they’ve faired a year on.

The midfielder had represented the Gunners at Under-18 level and in the FA Youth Cup before leaving after his contract expired in 2020. He subsequently penned a two-year deal with Norwich City, and continued his development in their Under-23s.

There were some suggestions last summer that he might push on to play a role for Daniel Farke’s first-team, but that never came to pass. The 19-year-old scored five goals and notched three goals in 21 appearances for the young Canaries in the Premier League 2.

Omole was the only Arsenal name on the Premier League’s initial 2020 released list last summer, after three seasons turning out in various youth competitions for Arsenal.

The London-born 21-year-old had originally joined the Hale End academy back in 2014 but stayed local after saying his goodbyes, making the switch to rivals Tottenham Hotspur.

Once a box-to-box midfielder, Omole has since adapted into a versatile defender, but now predominantly plays at centre-half. He made 20 appearances for Spurs’ Under-23s in the Premier League 2, making his debut off the bench in a 1-0 victory over Arsenal’s youngsters back in September, and has just extended his contract with the club.

Left-winger Tormey scored four goals for Arsenal’s Under-23s in the Premier League 2 in 2019-20 and had caught the eye in the academy, before rejecting a three-year contract and announcing he was “looking forward to a new challenge” elsewhere.

Surprisingly, a year on, the 21-year-old remains unattached. The latest reports in September suggested he was on trial at Rangers, but nothing materialised.

The Portuguese goalkeeper was at Arsenal between the ages of 12 and 16 before returning to his homeland, signing for Primeira Liga giants Porto for an undisclosed fee.

“Wearing this jersey is a great pride,” Virginia said at the time. “The scouts have been following me for eight years now and it was a dream of mine for a long time.

“I was offered a big opportunity and hopefully I will make it to the first team. It was a very good experience in England. It was four great years with a great team, but now I came to FC Porto, a super team, one of the best in Europe, and I am very happy.”

He’s continuing his development in Porto’s academy and you’d imagine any first-team involvement would be a few years off yet.

Not actually released, but we’ve included him because he’s definitely one worth keeping an eye on.

Leeds United paid a reported £3million for the teenage attacker’s services last summer, as they spent a not-inconsiderable proportion of their £100million outlay after returning the top flight on adding extra quality to their youth ranks.

Sunderland-born Greenwood returned north after two years with Arsenal, joining his pal from England’s Under-17s, fellow highly-rated forward Joe Gelhardt, who arrived from Wigan. The pair alternated playing up front and in the No.10 role for Leeds’ Under-23s, who topped the Premier League 2 second tier and achieved promotion.

It’s easy to see why the 19-year-old commanded a considerable fee; he scored 12 goals in 18 appearances for the youth side and has been tipped to make the step-up. But his only appearance for Marcelo Bielsa’s first team was in a 3-0 defeat to Crawley in the FA Cup, brought off the bench as they chased a two-goal deficit.

😲 Sam Greenwood take a bow! That is a worldie of a goal! pic.twitter.com/SSi7b4Ecn3

Matthews, 19, left Hale End after 11 years – over half his life! There was reported interest from Serie A clubs in the promising centre-forward’s signature, but he ended up joining Crystal Palace after impressing on trial.

As with other Arsenal academy alumni, Matthews spent the 2020-21 campaign turning out in the Premier League 2. He notched three goals and three assists in 19 appearances as Palace’s Under-23s finished third in the youth league’s second tier.