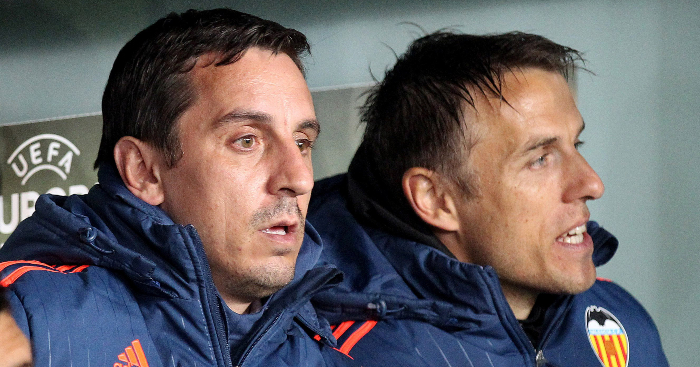 Valencia have a reputation as a bit of a basket case club in Spain, and it’s not difficult to see why after they sacked their sixth full-time coach in the last five years.

The sacking of Marcelino, who guided the club back into the Champions League two years running and won the Copa del Rey, has sent shockwaves across Spanish football. You only need to look at the four appointments before him to see the turbulent state the club was in before his arrival.

Here’s how the last five managers have fared at Mestalla. We’ve included their win percentages for reference.

Despite getting Valencia back into the Champions League in 2015, following a two-year absence, fans started to turn on the Portuguese manager after a poor start to the 2015-16 season.

It’s thought that the famously demanding Valencia supporters were unhappy with the coach’s close relationship with Jorge Mendes, who himself had ties with the club’s owner Peter Lim.

Nuno, from his time as a goalkeeper, was the superagent’s first client. He was sacked with Valencia ninth in La Liga, and teetering on the brink of a Champions League group stage exit.

The Englishman, who knew Lim from their partnership at Salford City, was given his first (and seemingly last) managerial job at the Spanish giants. His brother Phil was already there on the coaching staff, waiting for him.

He failed to win any of his first 10 games in charge, and Valencia dropped as low as 15th. With the league campaign a write-off midway through, he had a chance to save their blushes in the Europa League and Copa del Rey.

Under Neville’s stewardship, they reached the semi-finals of the Copa del Rey, getting past Barakaldo, Granada and Las Palmas, before things came to a crashing end with a bruising 7-0 defeat to eventual champions Barcelona.

The high point of his tenure came from an aggregate 10-0 victory against Rapid Wien in the Europa League round of 32, but they were eliminated in the following round by La Liga rivals Athletic Bilbao.

He was sacked by the club with eight games of the season remaining, in 14th and just six points clear of the relegation zone.

Rafael Benitez’s old assistant at Liverpool subsequently steered Valencia clear of danger by picking up 10 points from their final eight games, which included an unlikely 2-1 victory away to Barcelona, just a couple of months after the 7-0 cup defeat.

He barely lasted a month into the following season, though, sacked after Los Ches lost their first four games of the 2016-17 campaign.

Lim’s next move was to take a punt on Prandelli, who had taken Italy to the Euro 2012 final and been named Serie A coach of the year in 2008 after guiding Fiorentina to the Champions League, but things didn’t go to plan.

He resigned after only 10 games with a mixed record – three wins, three draws, four defeats.

Salvador “Voro” González had been appointed caretaker boss on two previous occasions, steadying the ship before the appointments of Neville and Prandelli, and how had an opportunity on a longer-term basis.

He was given until the summer, and achieved passable results in the league, but couldn’t stop the club suffering an underwhelming campaign. They finished 12th in La Liga, and were well-beaten 6-2 on aggregate by Celta Vigo in the second round of the Copa del Rey.

The man credited with getting Valencia back on track, Marcelino inherited a side that finished 12th and guided them back into the Champions League, finishing fourth in his first season at the club.

After enduring a difficult start to his second season, he turned things around to guide them to a second consecutive fourth-place finish, and won the Copa del Rey

Behind-the-scenes machinations have reportedly seen him ousted just three games into the 2019-20 season, which has caused widespread criticism in the Spanish papers. Valencia centre-half Ezequiel Garay, for one, isn’t happy about it.

“Whoever took this decision not only trampled over you, but over a whole squad and fanbase,” he wrote on Instagram. “I say it loud and clear: IT’S NOT FAIR”