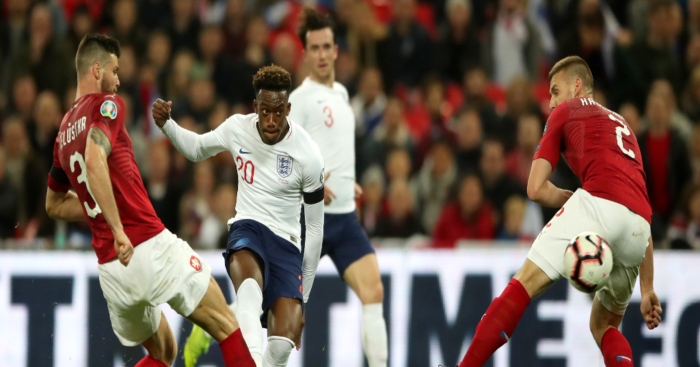 Callum Hudson-Odoi has enjoyed a rapid rise for both Chelsea and England over the last couple of years – and it seems certain his development will continue.

After making his Chelsea debut just a year ago, Hudson-Odoi recently broke into the England senior squad and has a host of keen admirers.

We’ve taken a closer look at his eye-catching evolution.

Hudson-Odoi comes from a decent pedigree of footballers. When he was born, his brother, Bradley, was already a member of Fulham’s reserve team and now plays non-league, while his father, Bismark, played for one of Ghana’s most successful clubs, Hearts of Oak.

“Every time my dad talks to me, I listen,” Hudson-Odoi told The Independent in March. “He’s been there, he knows what it takes, he’s had to cut things out of his life to play at the highest level.

“He’s always been there, for every game, no matter what, whether it’s here or out of the country. He’s got a certain whistle, so I always know he’s there. His advice helps me every day.”

Hudson-Odoi also benefited from the bursary scheme of south London private school Whitgift, which has helped develop internationals in a number of sports, including his Chelsea team-mate Victor Moses.

“I remember when Callum came in for the sports scholarship testing day and within three minutes Andy was nudging me to get my attention,” Steve Kembler, a coach at Witgift, told The Guardian in September 2018.

“That kind of ability shines straight away and it was a similar thing was someone like (England rugby union international) Elliot Daly. His basic level of talent was exceptional but he is also such a good lad.

“He is somebody who has a permanent smile on his face. There are people who give off energy that makes the people around them better and Callum is very fortunate to have that quality.” 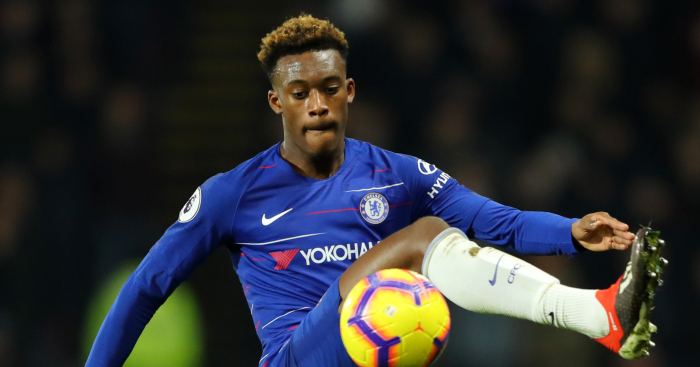 WATCH: Brilliant footage of 14-year-old Callum Hudson-Odoi tearing it up

Joining Chelsea’s academy in 2007, Hudson-Odoi quickly established himself as one of the most exciting prospects in the club’s youth system.

Stepping up to the Under-18s side in 2016, the forward netted eight goals and provided 11 assists to help Jody Morris’ side win a domestic Treble, also notching in a 5-1 FA Youth Cup final rout of a Manchester City side featuring the likes of Brahim Diaz, Phil Foden and Jadon Sancho.

At the age of 16, Hudson-Odoi was already finding himself playing for the Blues’ Under-23s and can lay claim to the dubious honour of scoring four times in three Checkatrade Trophy appearances.

As Hudson-Odoi began to make his mark on Chelsea’s youth teams, he quickly found himself involved in England’s age groups, despite also being eligible to play for Ghana – his brother was capped for Ghana at Under-20s level.

Representing England at the Under-17 European Championships, Hudson-Odoi scored in the semi-final victory over Turkey and the opener against Spain in the final, only to go through the rite of passage in any Three Lions shirt and lose on penalties.

But he went one better at the Under-17 World Cup in India, playing in all seven of England’s games, including the full 90 minutes of the final, as they exacted revenge on Spain with a 5-2 victory.

“That was a big step up for me,” he told The Independent. “Being away from home for a month was really difficult. I’d never been away for that long before. It really helped to boost my confidence.

“Representing England in front of 60,000 people, every time I went on the pitch and looked around it felt like a dream.

“[After the final], I called my mum and dad straight away. They were screaming, I was screaming. I couldn’t believe it.” 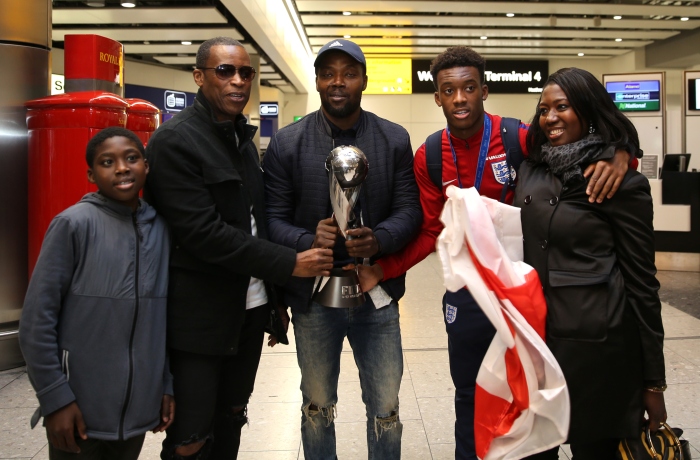 “I’ve been there throughout my whole life. Putting on the shirt for the first time, being a homegrown player, at such a young age, making my debut was an amazing feeling,” Hudson-Odoi told The Independent when reflecting on becoming Chelsea’s second-youngest player in history as a substitute in a 3-0 victory over Newcastle in 2018.

“Just seeing my shirt in the dressing room, it made me feel like a part of the club. It was a dream come true. [Once I was on the pitch] I just wanted to get on the ball as much as possible and show what I’m capable of. I think now I’ve done that, I’m just delighted and pleased for myself.”

Just a few days later, Hudson-Odoi made his Premier League debut, again off the bench, in a defeat to Bournemouth, but he has had to bide his time for more opportunities.

A promising showing in the Community Shield against Manchester City caught the eye, but he has had to make his impression in cup competitions in 2018-19, netting four times in the Europa League and once in the FA Cup.

“As soon as I saw the crowd screaming and jumping I didn’t think it was a goal,” he said of his first. “I thought that I’d done something wrong and then when everyone started coming round me I realised… I’d actually done it… I’d actually scored my first goal for my club. It was a proud moment for me and my family.”

Despite his relative lack of first-team football – he is yet to start a Premier League fixture – Hudson-Odoi has become one of the most sought-after footballers in Europe.

In January, Bayern Munich hoped to prise the 18-year-old away from Stamford Bridge with a £35million bid, only for Chelsea to reject the offer.

Hudson-Odoi, possibly encouraged by the success of Jadon Sancho at Borussia Dortmund, responded by handing in a transfer request, and while the move failed to materialise, it’s unlikely to be the last we hear of the saga.

“He has qualities that fit our game. He can dribble, he is fast, he moves well towards the goal. He is a young player who has great potential to evolve.

“I see in him a really good player who would certainly be a good face to join us.”

Recent reports in the Daily Mail suggest Hudson-Odoi remains keen on leaving Chelsea in the summer, with Bayern leading the chase ahead of Barcelona, Manchester United, RB Leipzig and Borussia Dortmund.

According to @SPORTBILD, Chelsea would be willing to negotiate for Callum Hudson-Odoi starting from €50m. Bayern's last bid for the player was at €40m. pic.twitter.com/BbYr50cTOp

While he has continued to work his way through the England youth ranks, scoring for both the Under-18s and Under-19s in 2018, Hudson-Odoi suddenly found himself fast-tracked into the senior squad after a number of withdrawals when he was preparing to link up with the Under-21s for the first time.

A 20-minute cameo in the 5-0 victory over the Czech Republic saw him become the youngest ever England debutant in a competitive match, and while his first start was marred by racist chants from Montenegro fans, the winger showed impressive resilience and maturity to respond by laying on an assist for Chelsea team-mate Ross Barkley in a 5-1 win.

“I don’t need to speak; his performance spoke really. With young players it is always up to them [how good they can be].

“He’s got the talent. His application with us has been excellent, he’s got to continue that. This is a great step forward for him but like any player you’ve got to constantly work and constantly look to improve.”