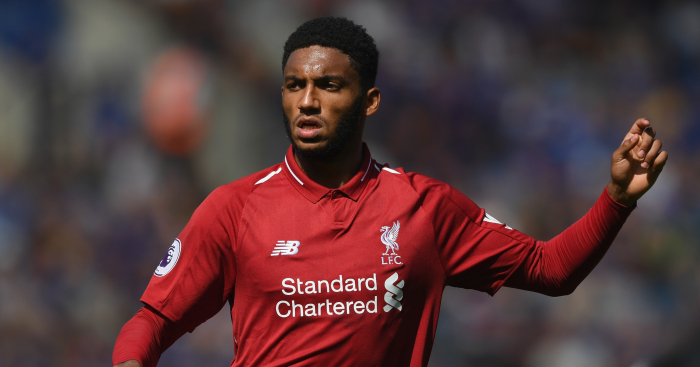 Liverpool‘s defence is receiving plenty of praise this season – and Joe Gomez has played a major role in the improvement.

Big-money signings Virgil van Dijk and Alisson Becker have taken much of the acclaim, but Gomez has been an equally key member of a defence that has been breached only three times in nine Premier League games.

We’ve taken a closer look at the 21-year-old’s rise through the ranks.

Gomez joined Charlton’s academy as a nine-year-old and was just 13 when he made his debut for the club’s Under-18s side.

The opportunity arose to join Premier League clubs – Chelsea signed team-mates Kasey Palmer and Charlie Colkett – but he remained loyal to the Addicks.

“He reminded me of Jonathan Woodgate, who I worked with at Leeds at the same age,” former academy director Paul Hart told The Telegraph in 2015. “Joe is probably a bit stronger physically than Jonathan was.

“The perfect footballer does not exist, but you look at all the assets Joe has – pace, strength, comfortable with the ball at his feet. It is very easy to see he has all the attributes to be a top player.”

The defender’s performances for Charlton’s academy earned him international recognition, and in 2014 he played every minute as England won the Under-17 European Championships.

After returning from the Under-17 European Championships with a winner’s medal, Gomez was rewarded with a senior debut at Charlton, playing at right-back in a 4-0 League Cup victory over Colchester.

“Gomez is going to be a very good player, and he showed me he needs to be in our squad,” then-Charlton boss Bob Peeters said. “At the age of 17 he has everything.”

From that moment on, Gomez was heavily involved with the first team and signed a new long-term deal. Twenty-four appearances, at both right-back and centre-back, in all competitions followed as Charlton finished 12th in the Championship.

However, he would not see out the duration of that new contract.

It only took one season of first-team football for Premier League clubs to reignite their interest in Gomez, who opted to join Liverpool in a £3.5million move in 2015.

After signing a five-year deal, it was suggested the defender could be sent out on loan back to the Championship, but he was thrust into the Reds team at left-back on the opening day of the season, providing the assist for Philippe Coutinho’s winner in a 1-0 victory at Stoke City.

“I was surprised when I saw Brendan Rodgers was thinking of giving him his chance so soon, and even more surprised when I read it would be at left-back,” Charlton academy manager Steve Avory told The Telegraph.

“I can’t recall him ever playing there much for us. But no one is surprised by how composed he looked. That’s how it has always been whenever he has been asked to step up a level.

“And the one thing I can guarantee with Joe is he’ll always stay grounded and never forget where he has come from.”

Joe Gomez to play his debut away at Stoke and have a cracking game proved he has ready for the Premier League. #LFC. pic.twitter.com/E5x6KZp8pX

But his bright start to life at Anfield came to an abrupt halt when he suffered a serious anterior cruciate ligament injury on England Under-21 duty which ruled him out for over a year.

The injury meant Gomez appeared just 10 times in all competitions in his first two seasons for the Reds, but it may have been a blessing in disguise.

“Now looking back at it, it was a big year for me to learn about himself and gain faith in myself,” he said in 2017. “It certainly has made me mentally stronger.

“I look upon things differently, I am a different person. When you have experienced something like that, you don’t take things for granted any more. I see it as a blessing that I was able to learn from it in the way I did.

“You can get caught up in a lot of things playing for Liverpool. The main thing is to stay grounded. That’s something I won’t forget.”

Right in the thick of it

Gomez’s injury came just days after Jurgen Klopp had been appointed Liverpool boss, but the German made it clear the youngster remained part of his plans.

“All the way through the manager sat down with me and asked how I was feeling, mentally more than anything,” Gomez said. “For the physical side of things, he could just speak to the medical team. He spoke to me when he needed to and it helped.”

He added: “I wouldn’t say Jurgen has come to me directly and said, ‘I rate you’. But it is nice to know that he has spoken positively about me. I’m thankful to be working with them.

“He is a top class manager and it is an honour to play under him. I just want to keep learning from him every day.”

Come the start of the 2017-18 season, Nathaniel Clyne’s own injury misfortune presented Gomez with the opportunity to break back into the first team.

With Clyne absent, Gomez was able to establish himself at right-back, making 31 appearances in all competitions.

Poor Nathaniel Clyne, not only does he have competition with Trent but Joe Gomez is giving Klopp another selection headache 💪 pic.twitter.com/NiQ3bzzcUR

Gomez’s resurgence caught the eye of England boss Gareth Southgate, who handed the defender a first senior call-up in November 2017.

He made his debut as a first-half substitute against reigning world champions Germany after Phil Jones suffered an injury and was named man of the match on his first start days later after an assured display as part of a back three against Brazil.

“It gives me plenty to think about,” Southgate told BBC Radio 5 live. “We are in the early stages of piecing this team together and it gives me huge heart.

“We took some brave decisions and, goodness me, the young players have rewarded me with some top performances.”

Sadly, Gomez’s next England appearance would end in disappointment as he lasted just 10 minutes before having to go off injured in a 1-0 win in Holland.

Despite returning to Liverpool to make two more appearances, the ankle injury would ultimately require surgery, ruling the defender out of the Reds’ Champions League final and England’s World Cup campaign.

For club and country

After the disappointment of missing out on the Champions League final and World Cup, Gomez has bounced back this season to establish himself in his preferred central role for both Liverpool and England.

Dejan Lovren, who impressed in the defeat to Real Madrid in Kiev and also helped Croatia to the final in Russia, has been forced to watch on from the sidelines as Gomez and Virgil van Dijk have formed the basis of a defence which has conceded just three goals in the Premier League.

Never before in the Reds’ entire 126-year history have Liverpool started a season by conceding three goals or fewer in their first nine league matches.