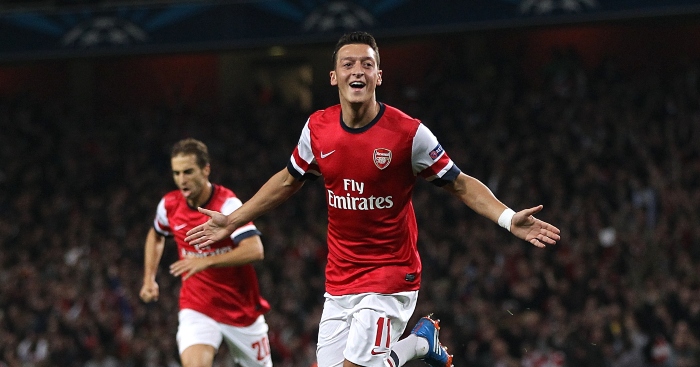 Mesut Özil has had an eventful career, but once he has retired he might look back and wonder if a couple of different decisions would have brought a better outcome.

Arsenal’s one-time record signing has 90 international caps and more than 100 European club matches under his belt, at times staking a claim for being one of the most exciting players in world football.

There’s an argument that he’s been unable to sustain those high points, though, and the 30-year-old is not in as strong a position on the field as many thought he might be when he was 20.

Breaking through at Schalke

Born in Gelsenkirchen, Özil was on the books of his hometown club as a teenager and made his Bundesliga bow for Schalke against Eintracht Frankfurt in August 2006 as a 17-year-old.

The man he replaced that day, Hamit Altintop, was another Gelsenkirchen-born player with a Turkish background, though unlike Özil he opted to play his international football for Turkey.

Özil was only at Schalke for a season and a half but also got his first taste of Champions League action with the club in a group stage defeat to Valencia in the 2007-08 season, leaving at the end of that campaign.

Once upon a time, Manuel Neuer and Mesut Ozil at Schalke pic.twitter.com/RTSqSHDd3j

Werder Bremen and a World Cup to remember

After moving to Werder Bremen in January 2008, Özil didn’t have long to wait for his first European final.

He was part of the squad that made a run to the last UEFA Cup final before it was rebranded as the Europa League, though the suspension of team-mate Diego made things that bit tougher and they ultimately fell to Shakhtar in extra-time.

Özil was still a Werder player when he travelled to his first World Cup with Germany, putting in an excellent show in the 4-1 second-round victory over England and helping Germany reach the final four of the tournament.

His performances were enough to alert Real Madrid, with manager José Mourinho saying he “fits our system perfectly” after completing a deal worth a reported £16.6million.

Thriving under Mourinho and a first title

When you look at the sort of player José Mourinho prefers to use, Özil doesn’t instantly fit the bill – his flair and perceived reluctance to chip in defensively is not a combination the Portuguese has traditionally been fond of, but one thing the manager does like is winners.

The German was one of Madrid’s main men for his debut season, earning him the No.10 shirt for his sophomore year and ending that campaign with a league title.

Özil finished in the top two in La Liga for assists in each of his three Real Madrid seasons, but the departure of Mourinho – plus the arrival of Isco and Gareth Bale – meant he decided to look for a new start.

And so to Arsenal, and a sensational deadline day move for a club record fee.

A fast start and a World Cup medal

The excitement around Özil’s arrival seemed justified early on, with some eye-catching performances in the Premier League to make fans confident they had a real star.

He ended his first season with five goals and nine assists in the league, ensuring Arsenal sat atop the league up until February, only for results to fall away later in the campaign and, while the Gunners finished just seven points behind champions Manchester City, that was only good enough for fourth place.

2014 was still a good year for Özil, though, as he played his part in Germany’s run to the 2014 World Cup title. He started each of Germany’s seven games at the tournament and laying on two assists – including one for Sami Khedira in the 7-1 semi-final win over Brazil.

The summer of 2014 saw Arsenal strengthen their squad further with the signing of Alexis Sánchez from Barcelona, attempting to follow the previous campaign with a proper title push.

A slow start meant they were never really in the title race, but the following campaign will be remembered as the one which ought to have brought a Premier League crown: top after 10 games, top after 20, two off the summit after a dramatic win over Leicester in February and then… nothing.

Özil notched 19 league assists in the 2015-16 campaign, at least six more than any other player, but that will be scant consolation after missing the chance to win the league.

As of 2019, Mesut Özil is earning more money than he ever has, becoming Arsenal’s highest-paid player when he signed a new deal in 2018. However, another trophy with the club feels further away than at any time since he joined.

He recorded just two assists in the 2018-19 season as Arsenal finished the campaign in fifth, despite having two prolific goalscorers in front of him, and it feels as though the Gunners couldn’t get rid of him even if they wanted to.

There have also been off-field distractions: he quit the German national set-up after allegations of racism which did not reflect well on his former colleagues, while he courted controversy by making Turkish leader Recep Tayyip Erdoğan the best man at his wedding.

The 2019-20 season represents a crossroads for Özil, but he’s attempting to tackle it head-on… by going for an extremely ‘new season, new me’ haircut. A new era perhaps? Only time will tell – although a promising showing against Bayern Munich will give fans hope.

We caught up with @MesutOzil1088 during Arsenal’s pre-season tour in LA. Stay tuned for more 🔥 soon pic.twitter.com/MUM5kWbOJE