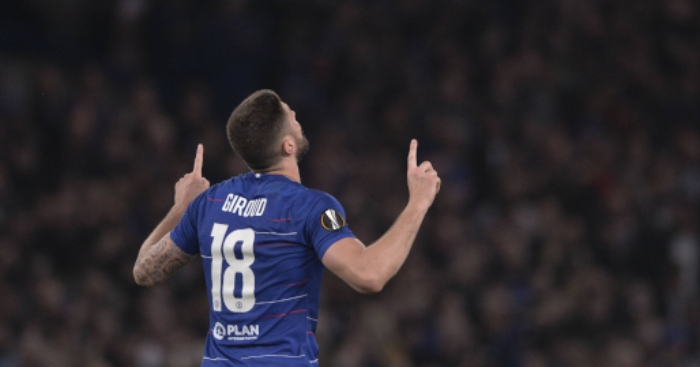 While Olivier Giroud’s game time has been limited under Maurizio Sarri at Chelsea, the Frenchman has often made an impact whenever he has been given an opportunity.

In a rare start on Thursday, Giroud was once again instrumental in Chelsea’s Europa League campaign, providing a goal and an assist in the 4-3 victory over Slavia Prague.

We’ve taken a closer look at the striker’s stats to see how prolific he has been this season.

Giroud has been directly involved in 13 goals in his last nine Europa League appearances, scoring 10 and assisting three.

His record in the competition this term stands at a goal every 85 minutes, finding the back of the net with 27% of his shots.

The France international is in esteemed company – only Lionel Messi can match the 10 goals he has scored in European competitions this season.

And he is the first player to score 10 European goals for Chelsea in a single campaign.

Olivier Giroud on lack of game time “Trust me I am very frustrated when I am not on the pitch but I don’t want to show it. You need to keep that frustration and transform it into positive energy. Trust me I’m not happy to play the second role.” #CFC pic.twitter.com/FAF2TdzPTi

When Giroud has contributed this season, he has had a game-changing impact.

His first goal of the season, away at BATE Borisov, was the only goal of the game as victory secured Chelsea’s place in the Europa League knockout rounds.

When PAOK visited Stamford Bridge the following week, Giroud set Chelsea on their way with a first-half brace as the Blues eventually ran out 4-0 winners.

On his 500th career appearance, the Frenchman scored an excellent free-kick to equalise against Vidi late on, before scoring a decisive goal away at Malmo in the round of 32.

He bagged his first Chelsea hat-trick in a 5-0 win over Dynamo Kiev in the second leg of the round of 16 and followed that up with what turned out to be a crucial goal and assist in the 4-3 win over Slavia Prague in the quarter-final.

Having played 802 minutes in the league, he has scored only twice, against Tottenham and Brighton, as well as provided four assists. That gives Giroud a record of being involved in a goal or assist every 133.6 minutes in the Premier League this term.

While that is a modest record, it still trumps those of Chelsea other ‘natural’ centre-forwards this term (ignoring Eden Hazard).

Although Giroud has played in 24 Premier league fixtures this term, he has been in the starting 11 for only seven of these matches.

In contrast, the 32-year-old has started in nine of his 11 appearances in the Europa League.

The impact Giroud has on Hazard whenever he has started in the Premier League has been striking this season, as the help of a focal point in attack seemse to bring the best out of Chelsea’s star player.

In the seven Premier League games Giroud has started, Hazard has scored six times. That means 37.5% of Hazard’s league goals this season have come while starting alongside Giroud, despite that occurring in just 21.2% of the Belgian’s league appearances.

After Giroud provided two assists for Hazard in a 4-1 victory over Cardiff City, the Real Madrid target said: “Olivier’s a target man, maybe the best in the world; I think so.

“When he gets the ball he can hold the ball and we can go in deep with him, so for us it’s a pleasure to play with him.”