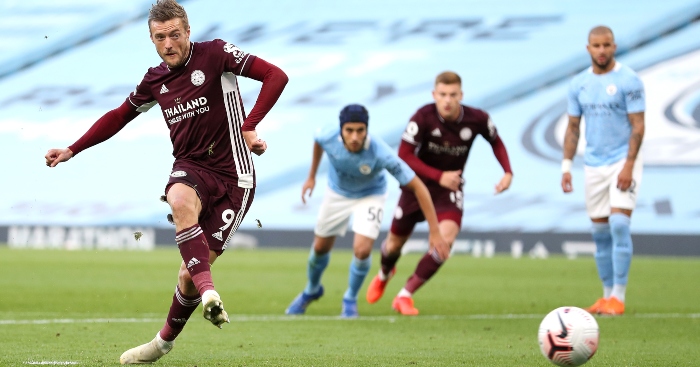 Leicester City’s Jamie Vardy continued his record of terrorising the best teams in the country with a hat-trick against Manchester City on Sunday.

Vardy has been a thorn in the side of Premier League defences for the last six years and seems to relish playing in the big games.

Here, we’ve taken a look at the striker’s record against the Premier League ‘big six’ in all competitions over his career to see how he has fared.

Jamie Vardy vs Liverpool at home 15/16… Goal of the season bar none 👏👏#lcfcpic.twitter.com/gpPekikdja

As the stats show, Vardy has excelled against the big six throughout his career, averaging a goal or assist every 113 minutes – or just over every game.

Manchester City seem to bring out the best in the former England striker, as Vardy has scored more against them than any other English opponent apart from Burnley.

Arsenal also suffer at the forward’s hands with the 33-year-old averaging a goal or assist a game against the Gunners.

Vardy is also prolific against reigning champions Liverpool, scoring seven goals against the Reds including a stunning effort in February 2016.

But the team most successful at combating the Leicester striker are Chelsea. In 14 appearances, totalling 1,204 minutes, Vardy has only managed four goals and one assist against the Blues.