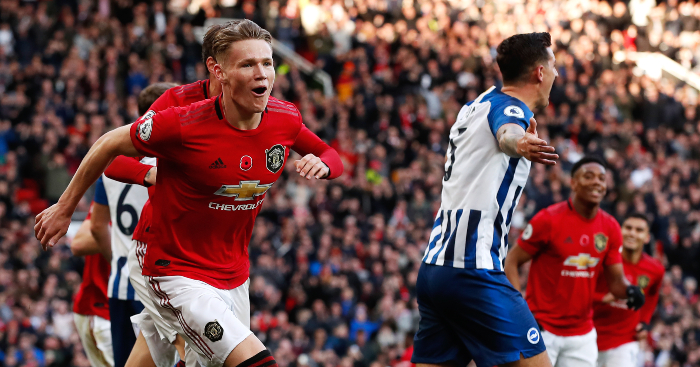 The emergence of Scott McTominay has been one of the biggest positives for Manchester United over the past 18 months – and the midfielder continues to grow in stature and influence at Old Trafford.

McTominay has come a long way since Jose Mourinho made up an award for him at the end of 2017-18, establishing himself in Ole Gunnar Solskjaer’s midfield.

We’ve compared the 23-year-old’s stats from the current Premier League campaign to 2018-19 to show how he’s improved with the Red Devils.

McTominay has never been a prolific goalscorer since breaking into the first team at Old Trafford, but he has already beaten his tally of two from last season with three this term, while he has also registered his first assist in the Premier League.

Admittedly, the Scotland international also has more minutes to his name this season, but his record of a goal or assist every 352.3 minutes in 2019-20 is a significant improvement on one every 431.5 minutes last term.

What a pass from Scott mctominay pic.twitter.com/zC7U89Fw5A

While he is not noted for his playmaking ability, McTominay has also been much more creative in the Premier League this season, averaging 0.8 chances created per 90 minutes – a big upgrade on his record of 0.1 per 90 in 2018-19.

The midfielder appears more confident on the ball, attempting far more dribbles per 90 minutes (2.3 vs 0.4). Despite the increase, McTominay’s success rate has actually improved considerably (65.2% vs 25%).

Perhaps as a result of him now trying more adventurous passes to create more chances, his passing accuracy has actually decreased from 83.3% in 2018-19 to 78.9% this season.

While McTominay makes marginally fewer interceptions, down from 1.6 per 90 minutes to 1-.5, his tackling has improved in the same manner as his dribbling.