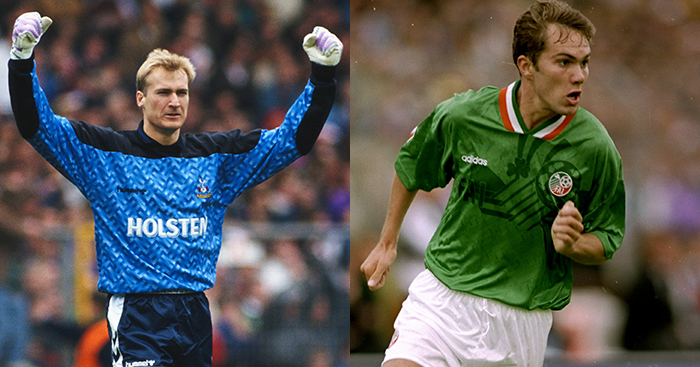 Just above scoring a World Cup final-winning bicycle kick and being immortalised as a bronze gargoyle, landing a spot on the FIFA cover is football’s biggest solo accolade.

Players might put on an outward display of reverence for the Ballon d’Or, but the real recognition of one’s greatness comes when EA Sports phone up.

There is, however, a bit of a snag with the way FIFA ordains football’s greatest players for a given year.

Since each game is released at the start of the season, EA’s marketing folks have to anticipate an appropriate face for the coming year. It’s akin to picking your Fantasy League captain on gameweek one and not being allowed to change them ever, ever again

And that’s led to some surprising – no, not surprising, straight-up baffling – picks over the years. It’s time to turn back the clock and highlight FIFA’s strangest cover stars.

Sharing the limelight with David Platt on the cover of FIFA’s debut videogame is that ethereal, superlative-defying midfielder, the proto-Zidane, Piotr Świerczewski.

Pictured about to clatter Platt and give away a foul, Świerczewski made 31 appearances for Ligue 1 juggernauts AS Saint-Étienne in the 1993-94 season.

Birmingham City fans will remember his lone appearance during the 2002-03 season like it was yesterday, and it’s no exaggeration to say his appearance on FIFA International Soccer’s cover inspired a new generation of players to model their game on Świerczewski’s. Ok, it’s definitely an exaggeration to say that.

If someone held you at gunpoint and forced you to write down every player you could remember from the 1994-95 season, the chances of you penning down Norwegian goalkeeper and inexplicable FIFA 95 cover star Erik Thorstvedt within the first 72 hours are slim.

In fairness, Thorstvedt had a good career at Tottenham and won their Player of the Year award… six years previously, in 1989.

He’d worn the No.1 jersey as Norway’s starting keeper at the 1994 World Cup too, but that doesn’t seem like traditional grounds for putting someone on a videogame box.

During the 1994-95 season he made a whopping one appearance for Spurs, and that was apparently enough to keep the likes of George Weah, Romario, Jurgen Klinsmann and Roberto Baggio off the cover.

Look at him there, tussling with ex-Crystal Palace manager-to-be Frank de Boer.

He’s never getting to that ball before the Dutchman. He’s off-balance, outmatched for strength, and the ballooning fabric of his long-sleeved national kit is working like a parachute against his forward trajectory. Ladies and gentleman, Jason McAteer.

With appearances at multiple World Cups and a Premier League career spanning over a decade, McAteer’s certainly a recognisable face to English and Irish football fans – although they’d surely agree he’s no Piotr Świerczewski.

Before he became an all-time great in the field of haircare, David Beckham was known for his ability to play football.

In fact, he was so good at football that in 1996 he scored from the halfway line, and quickly became the beating heart of the national team thereafter. So it made sense that England’s most exciting player for years should make the cover of FIFA 98 – a game about forging a path to the World Cup.

Time makes a fool of us all. EA Sports weren’t to know that England’s second round fixture with Argentina would somehow culminate in burning Beckham effigies across the countries and newspaper headlines reading “Ten heroic lions, one stupid boy.” A stupid boy who happened to be FIFA’s cover star that year.

Yes, David Beckham absolutely deserves the recognition. He’d be an apt candidate for just about any other FIFA game’s box art. You could even make a case for his appearance over Jason McAteer in 1996.

But as it happened, 1998 was the precise worst year for him to grace football gaming’s biggest franchise.

FIFA went with region-specific stars for its covers in different countries in 2000, which meant English fans were treated to Sol Campbell on their covers, while Italian, Spanish, and American gamers got the above national players.

Let’s not rip into Sol Campbell for the sake of it, or because he looks like he’s chasing down a ball he’s just mis-controlled on the cover. For Spurs, Arsenal, and England, he was a towering behemoth who struck fear – genuine fear – into the hearts of many a willowy striker.

Similarly, Montella had been prolific in Serie A throughout the ‘90s and began the new millennium with 18 goals in 31 appearances for Roma in 1999-00. Guardiola was still an instrumental part of the Barcelona set-up, while Pope’s athleticism made him one of MLS’s first bona fide stars.

But look, let’s call out the elephant in the room: 2000 was the year of Luis Figo. He’d made headlines (and enemies) by signing for Real Madrid from Barcelona in July, ushering in the era of the Galacticos. He won the Ballon d’Or that year, scoring six times in 13 international appearances and impressing in each of his 34 domestic appearances.

Despite the pigs’ heads and whatnot. Given the chance to retrospectively ordain a cover star for this game, even the bewildered Joe Kinnear would opt for the Portugal No.7.

Hoping to avoid detection between Patrick Vieira and Andriy Shevchenko on the FIFA 2005 cover is poor old Fernando Morientes.

Like Beckham, he’s a quality player who’d have fit right in on the cover of another year’s edition. Perhaps on the FIFA 96 box as a youngster at Real Zaragoza who’d just bagged 18 goals from 37 appearances. Or at the peak of his prolific partnership with Raul for FIFA 2001.

Frankly, any year but 2005, which was characterised by a disappointing Liverpool loan which led to a total of three goals.

You know what they say about all work and no play having a broadly negative effect on Jack, don’t you? Well, swap out ‘work’ with ‘stress-fracture ankle injury’ and you’ve got the story of Wilshere’s 2011-12 season. Not a single appearance for the cover co-star. No play at all.

Fortunately, Rooney – who features on an incredible seven covers in the UK – played for the both of them, scoring 27 goals in 34 appearances. Those are the kind of stats that generally only appear in videogames, aptly enough.