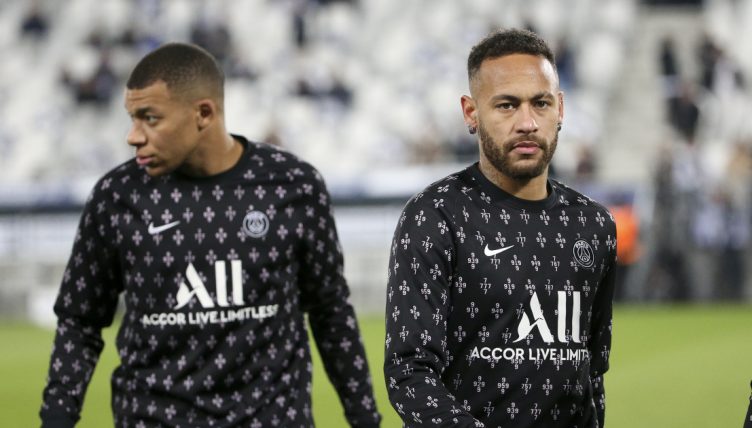 Neymar da Silva Santos Junior is comfortably one of the best-known names in football, and for good reason.

OK maybe just the Neymar part, but the Brazillian has wowed crowds since his early days with boyhood club Santos before winning it all with Barcelona and then becoming the most expensive footballer of all time when he moved to PSG for €222million in 2017.

But who else did PSG sign that summer? Surely nothing could compete with Neymar…

Yep, PSG signed Mbappe in the same window they got Neymar. The then 18-year-old left Monaco for league rivals PSG initially on loan in 2017 and continued to establish himself as one of the most exciting teenagers of all time – and he is now considered one of the best players in the world.

PSG would make the deal official the following summer, the figure for his transfer standing at about €180million, meaning that over €400million was spent on Neymar and Mbappe alone.

Mbappe initially joined PSG fresh from firing Monaco to a Champions League semi-final and a Ligue 1 title, which he would win back from his former club with PSG the next year.

The Brazilian right-back is now the most decorated player in football history, and signing for PSG and winning everything in France certainly helped him on that front.

He spent two seasons and the Parc des Princes, joining after his one year at Juventus, and was a regular in the first team before he left for Sao Paulo.

After a short spell back at Barcelona, he’s still going at the age of 39 with UNAM Pumas in Mexico. What’s not to love? Well, his time back in Brazil apparently.

A less successful signing and a less glamourous one too, Berchiche signed for PSG for around €16million.

The left-back spent just the one season in Paris, winning everything there was to win unsurprisingly before he headed back to his native Basque country where he joined Athletic Club.

He was PSG’s starting left-back for most of the season and says he sometimes misses being at the club.

“They are very different. Each dressing room has good and bad sides,” Berchiche said to Athletic Club’s website.

“But I can say that I was well integrated in both. There are good people on both sides.

“Maybe the atmosphere is more familiar here with players who originate from this region; maybe there is more cohesion here. But there was a very good squad in Paris, with South American players, and sometimes I miss that too.”