Manchester United‘s Bruno Fernandes has been the signing of the season, according to WhoScored’s average ratings for the 2019-20 campaign.

While a lot of players struggle to adapt to a new league, Fernandes hit the ground running after joining United from Sporting Lisbon in January.

WhoScored have looked at the ratings of every new signing in Europe’s top five leagues to see who made the biggest impact in 2019-20.

After losing Thorgan Hazard to Borussia Dortmund in 2019, Borussia Monchengladbach signed Thuram from Ligue 1 side Guingamp in a €12million deal.

The 22-year-old, who is the son of 1998 World Cup winner Lilian Thuram, registered 10 goals and a further eight assists in his debut Bundesliga campaign.

Lukaku endured a difficult final season at Manchester United and joined Inter Milan for £74million in 2019.

The striker has well and truly proved his doubters wrong in Italy, however, scoring 23 goals in 36 Serie A appearances while helping Inter finish in second place, one point behind Juventus.

The only defender to feature on this list, Mbabu joined Wolfsburg after two impressive seasons at Swiss champions Young Boys.

After a difficult start to the season, the right-back eventually cemented his place in the side and helped his side finish sixth in the Bundesliga.

Nkunku moved to RB Leipzig from PSG in 2019 in search of regular first-team football, and he has been a revelation in the Bundesliga.

The 22-year-old bagged five goals and 13 assists in 32 Bundesliga appearances while making 3.5 key passes per 90 minutes.

Two keepie-uppies and a chip over the goalkeeper!

The former PSG man earns RB Leipzig a point in some style! 😍 pic.twitter.com/hv3AFJCtLW

Gueye made a £28million switch from Everton to Paris Saint Germain ahead of the 2019-20 season and has established himself as a key part of the team.

The midfielder made 33 appearances in all competitions, helping the French outfit win Ligue 1 and the Coupe de France.

Ben Yedder spent three successful seasons at Sevilla before Monaco paid his £37.1million buyout clause to secure his services in 2019.

The striker ended the curtailed Ligue 1 campaign as the joint-top scorer alongside Kylian Mbappe, scoring 18 goals in 26 appearances and providing a further four assists.

Haaland became one of the most sought-after forwards in Europe after scoring 28 goals in 22 games for Red Bull Salzburg in the first half of the season.

Despite interest from Manchester United, he decided to join Borussia Dortmund in January 2020 in a £17.1million deal.

The Norway International netted a hat-trick on his debut and finished the season with 13 goals in just 1063 minutes of Bundesliga action.

Savanier’s impressive performances for Nimes earned him a £8.5million to hometown club Montpellier in 2019.

After missing the opening months of the campaign through injury, the midfielder made up for lost time by providing six goals and two assists in 19 Ligue 1 appearances.

Ibrahimovic returned to AC Milan as a free agent in January 2020 after leaving MLS side LA Galaxy, and he continues to prove that age is just a number.

The 38-year-old established his place in the starting XI, scoring 10 goals and providing five assists in 18 Serie A appearances.

‘If I was here from the beginning of the season, we would have won the Scudetto,” Ibrahimovic said in July 2020. 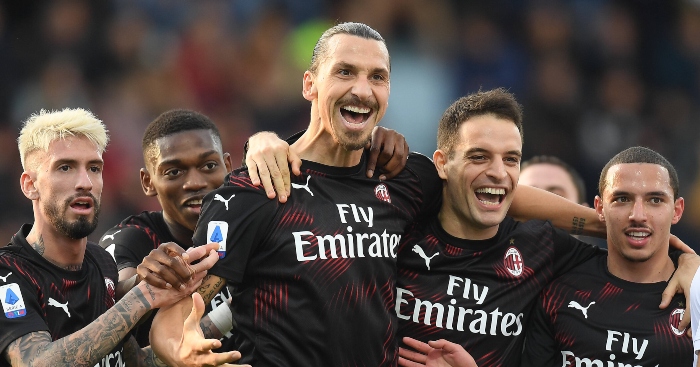 READ: Comparing AC Milan’s record with and without Zlatan Ibrahimovic in 2019-20

Fernandes joined United from Sporting Lisbon in a £47million deal at the end of January and made an instant impact at Old Trafford.

Ole Gunnar Solskjaer’s side eventually finished in the top three and no team have picked up more points than United since the midfielder’s league debut in February.