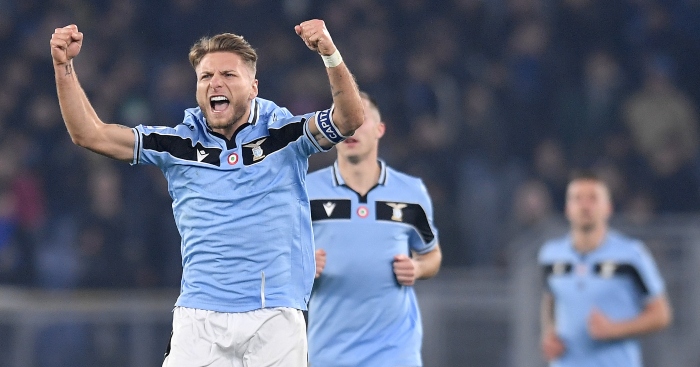 As the continental European competitions get back underway, now feels like a good time to check the lay of the land in the continent’s biggest leagues.

More than 3,000 goals have been scored across the English, French, German, Italian and Spanish top flights, and we’ve seen a variety of sources responsible.

The folks over at WhoScored have broken it down, producing a full line-up based on the top scorer for each outfield position, while we’ve added in the goalkeeper with the most assists to turn it into a full XI.

We’re still waiting for the first goal this season from a goalkeeper in Europe’s top five leagues, so we’ve decided to use assists as a tie-breaker.

While several goalkeepers have one assist to their name, including Alisson and Aaron Ramsdale in the Premier League, Barcelona’s Ter Stegen is the only man with two.

His first assist came back in September, when he rushed from his area to make an interception and play in Luis Suarez in the win over Getafe, while the second came against Mallorca a couple of weeks before the winter break.

There are times when it feels as though Doherty is playing as an auxiliary forward rather than a right-back, so this is no great surprise.

The Irishman scored four league goals last season and already has three this time around, albeit without any assist to his name.

Doherty’s most notable goal this season came in the come-from-behind win over Manchester City, with his 89th-minute strike clinching a 3-2 victory.

Austria international Hinteregger has often been a threat from set pieces, but things have got ridiculous this season at Eintracht Frankfurt.

After scoring just one league goal in 14 games on loan with the German club this season, he already has six from 15 after joining permanently.

Those six goals, one of which came in a 5-1 victory over Bayern Munich, put him just outside the top 20 goalscorers in the entire Bundesliga.

Criscito is traditionally more of a left-back than a central defender but has made 12 appearances in the middle of defence this term.

Like Hinteregger, the Italian is enjoying the best goalscoring season of his career with almost half the campaign remaining.

In addition to the four goals he’s scored from a central position, he has two when starting on the left, bringing his tally for 2019-20 up to six.

AC Milan are no strangers to goalscoring left-backs, with Ricardo Rodriguez finding the net four times in 2017-18, but Hernandez has already surpassed that.

The Frenchman didn’t come cheap, joining from Real Madrid in a deal worth up to €20million, but he has scored five times in Serie A alone and another in the Coppa Italia to make him Milan’s joint top goalscorer so far this season.

He even scored in back-to-back league games, the winner at Parma and Milan’s second in a 3-2 win at Bologna.

what an outrageous volley! pic.twitter.com/JCgvtFRhzy

Patrick Vieira’s Nice aren’t tearing up trees in Ligue 1, but it remains fitting that their joint highest scorer is a central midfielder from France.

Cyprien is one away from matching the eight goals he scored in the 2016-17 league season, his first with the club, and has already surpassed Vieira’s own career-best return of six.

His goals this season include a run of three in as many games back in August and September, and a double in December’s 4-1 win over Metz.

Chelsea supporters will be familiar with Parejo, having watched him miss a penalty against them for Valencia in the Champions League in November.

He’s not been found wanting domestically, though, scoring six times in La Liga including once against former club Real Madrid.

Parejo still has some way to go if he wants to equal his best season in front of goal – he found the net 12 times back in 2014-15.

A freer role at PSG this season hasn’t stopped Neymar chipping in with the goals, it’s just allowed him to have more fun in general as well.

The Brazilian has already matched the 13 league goals he scored in his final Barcelona season, but from half as many minutes, and returned from suspension to score in his first Champions League start of the campaign. Nine of those have come from a more withdrawn role.

If he continues at the recent rate of eight goals in as many games, he’ll likely surpass his best tally in Paris, when he finished with 19 league goals in 2017-18.

Considering his relatively slow start to the season, things are going pretty well for Messi.

He’s the top scorer in all of La Liga with 14 goals, all from a starting spot out on the right, and has 12 assists to go along with that.

Rashford’s shift to the left has been more productive than some expected, even if England might prefer to use him as a central striker in Harry Kane’s absence.

Eleven of his 14 league goals have come from out wide, and he’s already scored more this season than in any other in his career to date.

With Jadon Sancho also chipping in 13 goals (from a variety of starting positions across the frontline), things are looking good for Gareth Southgate’s squad… providing Rashford makes it back from injury and picks up where he left off.

This goal isn't talked about enough. Bloody unreal from Marcus Rashford, goal of the season without a doubt. 🔥🔥 pic.twitter.com/7aSssJXzwh

There are plenty of hotshots across Europe this season, meaning you’ll need more than a goal a game to make the cut.

Even that isn’t enough for Robert Lewandowski, whose 23 goals in 22 Bundesliga games leave him trailing Lazio man Immobile, while even Erling Haaland only has 24 in the league.

The Italian has now scored 26 domestic goals at a rate of one every 77 minutes: he needs just four more before May to make this his best ever season in front of goal, and to become only the third player this century to hit 30 in a single Serie A season.