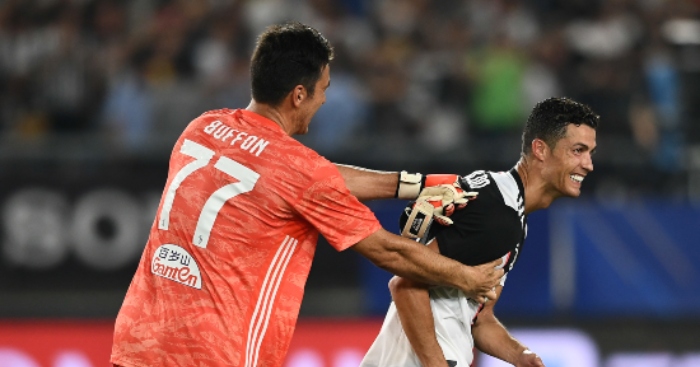 When it comes to squad numbers, there are some rules you really shouldn’t break.

Number one should be reserved for the goalkeeper, for example, while nine and 10 go to attacking players.

There’s a bit of variety over four, five and six, depending on which country you’re from, but that still unfortunately leaves plenty of room for choices which are just plain wrong.

It was bad enough when Carroll wore 8 in his first West Ham season, but 7 borders on blasphemy.

The No.7 shirt is designed for pacy wingers, or short, nippy strikers at a stretch. The last time Andy Carroll beat someone for pace and put in a cross, Barack Obama was still president.

Milan have been taking the piss for a while now when it comes to shirt numbers, but it feels like they’re doing it just to spite us these days.

No.68 is an NFL squad number, not a football one. Grow up.

Bonucci left Milan more than a year ago

At a push, we’re okay with a striker wearing No.99 if the 9 jersey isn’t vacant. At a push.

A goalkeeper wearing 99, though? It feels like spite. “If I can’t have the lowest number then I’ll take the highest one,” Donnarumma is telling us. Milan do not currently have anyone wearing No.1.

We’re extremely not okay with this one. Sure, it’s better than the ‘is it or isn’t it secretly fascist’ debate when Buffon wore 88, but not by much.

Buffon should wear 1 and 1 only. We had enough trouble watching him in a non-Juventus shirt for a while, but now he’s back and he’s wearing No.77. It feels like Wojciech Szczęsny should have made way out of respect.

Speaking of Buffon controversially wearing the No.88, we probably don’t need to tell you what number Mignolet has picked at Club Brugge.

Ledesma’s career in squad numbers followed a pleasing trajectory to start with, starting out in English football with Walsall by wearing 30 and 28 before graduating to 11 at Middlesbrough.

He later switched to 10 at Rotherham, but we should have always known he’s a wrong ‘un after a couple of rogue years in the No.32.

Now he’s at FC Cincinnati wearing 45, we can confirm those suspicions are true.

Much like Ledesma, Forestieri appeared sensible for the majority of his career, wearing 9, 10 and 11 as an attacking player – even 17 is pleasing for a forward who may not be in the starting XI.

But he is now onto his fifth consecutive season wearing No.45 for Sheffield Wednesday and, quite frankly, we’re glad Watford dumped him once they won promotion to the Premier League.

You know how we said earlier on how we’re sort of alright with strikers wearing 99 if 9 is unavailable?

Well upon joining Inter, left-back Nagatomo explained: “I’ve always worn number 5, but here that shirt is already taken by Dejan Stankovic so I asked if I could add a number and have 55.”

Players wearing their year of birth on the back of their shirt is borderline acceptable, with Bixente Lizarazu’s No.69 a prime example (at least we think that’s why he chose the number).

Mor wearing 97 is different, though. None of us need to be reminded that there are professional footballers born in 1997, going about their business like they’re adults.

Taarabt essentially exists as a footballer to make your dad angry, so it’s only fitting he wears the No.49 for Benfica.

We’re not saying Manolas is obsessed with the number four, but since breaking through for Greek outfit Thrasyvoulos in 2008-09, he has worn 40, 24, 4 and 44, which he has carried over from Roma to Napoli.

He even cost €34million and earns a reported €4.5 million a year.

“No.66 has just stuck with me so far,” Alexander-Arnold told the Liverpool Echo upon the release of the Reds’ new shirt in 2018. “It has brought good games and good moments so I don’t think there’s any rush in changing it.”

Since then, the right-back has won the Champions League, established himself with England and was part of Liverpool’s record-breaking Premier League campaign.

Show some faith in yourself, Trent. Just take the No.2. Nathaniel Clyne isn’t going to be wearing it any time soon.