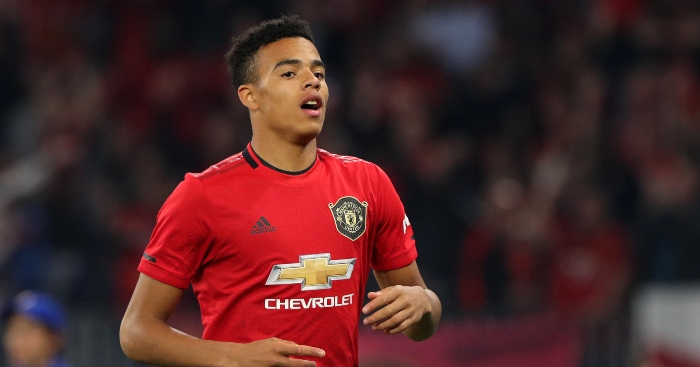 With each passing year, we see the emergence of a footballer born after a momentous life event, as if their debut serves solely to remind us of our own age.

However, we can continue to take pride in at least a couple of players still going despite being a few years our senior.

We’ve looked at Europe’s big five leagues and picked out the three youngest and three oldest players to feature in the 2019-20 season.

Not only is Manchester United’s Mason Greenwood the youngest player to get minutes this season, he’s got minutes in every single one of the first four games of the season.

The teenager’s longest runout came in the defeat to Crystal Palace, when he played 34 minutes, and he is yet to add to his one Premier League start – on the final day of the 2018-19 season.

He’s the only 17-year-old to feature for any club, though three 18-year-olds have played in the league: Arsenal’s new signing Gabriel Martinelli, Chelsea’s Billy Gilmour, and Spurs man Oliver Skipp, who turns 19 on September 16.

🔴 What a debut goal for Gabriel Martinelli 😍

At the other end of the scale, Phil Jagielka is the only 37-year-old to step on a Premier League pitch, making him older than a handful of referees in the division as well as all of the other players.

Ben Foster will also turn 37 before the end of the season, while three 35-year-olds have already racked up minutes: Glenn Murray, Wes Morgan and José Holebas.

Foster’s goalkeeping rival at Watford, Heurelho Gomes, is 38 but has not played yet.

Barcelona forward Ansu Fati, born in October 2002, became the club’s youngest ever La Liga scorer and the third-youngest player of all time to find the net in the Spanish top-flight.

Fati made his debut in the 5-2 victory over Real Betis and opened his account after coming off the bench against Osasuna in Barça’s third game of the season.

He’s also the overall youngest to play in the division this season, followed by Real Sociedad’s Ander Barrenetxea and Iker Losada of Celta Vigo, who turned 18 at the start of August and scored on his La Liga debut a couple of weeks later.

When you score your first goal in #LaLigaSantander aged only 16! 👏

Not only have Barcelona had this season’s youngest player, but they’ve conceded to its oldest.

Aritz Aduriz, now 38 years young, scored an acrobatic winner on the opening weekend as he continues to refuse to get any worse as he gets older: he has scored 118 league goals for Athletic Bilbao, which is pretty impressive when you consider he was already 31 when he joined the club.

Another evergreen outfielder, Joaquín, is the second oldest after turning 38 in the close season, while Diego López rounds off the top three.

The Bundesliga is often held up as a great avenue for Premier League youngsters to get minutes, and sure enough, the youngest player to feature in the division this season came through an English academy.

Dutch forward Daishawn Redan joined Hertha Berlin from Chelsea over the summer, and the 18-year-old forward made his first-team bow in a 3-0 defeat to Wolfsburg.

18y, 204d – Daishawn Redan (18y, 204d) has become the youngest player from the Netherlands to debut in the #Bundesliga. He replaces Rick van Drongelen as the youngest Dutchmen. Youngster #BSCWOB @HerthaBSC_EN pic.twitter.com/chyOPJRWNM

All three are young enough to be the child of Claudio Pizarro, who was also once on the books of Chelsea.

The Peruvian returned to Werder Bremen for a fourth stint last season, and already has two cup goals this season as he closes in on his 41st birthday.

Pizarro is the only player born in the 70s to play in this season’s Bundesliga, but Oliver Fink of Fortuna Düsseldorf is still going at 37 and Stephan Lichtsteiner – now at Augsburg after an unremarkable season with Arsenal – became the oldest player to be shown a red card in the division in 2019-20.

Had Moise Kean stayed with Juventus, rather than joining Everton over the summer, he’d still be one of Serie A’s three youngest players.

Eight teenagers have played top-flight football in Italy this season, but they’re all 19, with Brescia’s Sandro Tonali the youngest.

Dejan Kulusevski and Giacomo Raspadori round off the podium places, with Raspadori’s Sassuolo team-mate Hamed Junior Traoré – another 19-year-old – taking the honour of youngest scorer.

🎯 Dejan #Kulusevski is the only player born in the year 2000 to have provided more than one assist in a single match across the top 5 European leagues in the 2019/20 season so far.#CrociatiStats #UdineseParma pic.twitter.com/vemSvNYqst

Sergio Floccari made his professional debut before any of those men were even born, and he’s still going for SPAL at the age of 37.

He’s just 13 days older than Bruno Alves, who wasn’t young when he joined Rangers in 2017 but is now in his second season in Parma’s defence.

The top three is rounded off by Rodrigo Palacio, who retired from international football more than five years ago but is already off the mark for this season with two Coppa Italia goals in Bologna’s victory over Pisa.

Plenty has been made of Eduardo Camavinga’s emergence this season, and rightly so: the 16-year-old has been a fixture in Rennes midfield this season, kicking on after making his debut in April, and shone as the French cup holders stunned Paris Saint-Germain in Ligue 1.

Camavinga’s performances have taken some of the focus off the five 17-year-olds to pick up game-time, the youngest of whom is PSG’s own Adil Aouchiche, a starter in the win at Metz.

Reims youngster Nathanaël Mbuku takes third spot, having featured in all of the first four league games, with Montpelier’s Joris Chotard just behind.

Montpelier also have this season’s oldest player, with Brazilian defender Vitorino Hilton on course to keep going beyond his 42nd birthday on September 13.

He is more than five years older than the next oldest player, team-mate Souleymane Camara, who has made three appearances from the bench more than 15 years after featuring once in Monaco’s run to the 2004 Champions League final.

The third-oldest is Angers goalkeeper Ludovic Butelle, who played back-up to Santiago Cañizares at Valencia way back when.