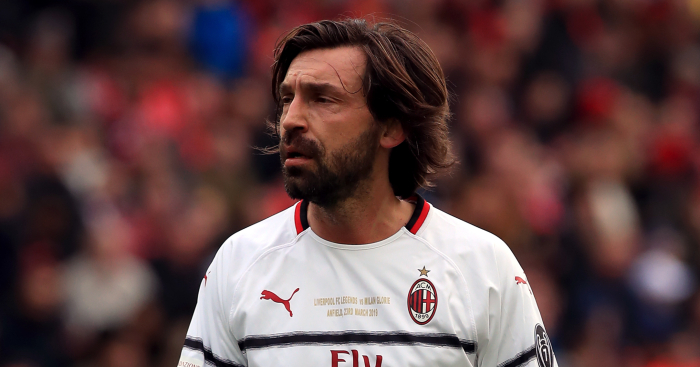 Some football fans may bemoan the international break, but there was plenty of action this weekend to excite supporters.

As well as the Euro 2020 qualifiers, there were some eye-catching moments in the lower leagues and a star-studded charity match at Liverpool.

Just give the Bromsgrove player the Puskas Award now.

The MLS outfit announced their team by what their favourite kind of pizza is.

And by favorite pizza 🍕 pic.twitter.com/fgtYC49XIv

A trip to Liverpool saw Pirlo and some of his former AC Milan team-mates pay homage to The Beatles.

As nonchalant a touch you are ever likely to see, followed by some typically excellent Ray Hudson commentary.

The commentator is all of us! What a lay off by Firmino. Man's balling #BRAxPANpic.twitter.com/NxefkdkuqP

We still can’t work out how the Southampton man missed this.

A nice tribute after scoring his second against Czech Republic. Either he forgot after his first or was very confident!

Raheem Sterling lifted his shirt to show a tribute to Damary Dawkins when he celebrated his second goal. Dawkins was a 13-year-old youth team player from Crystal Palace, who sadly passed away with Leukaemia earlier this week. pic.twitter.com/hB4TzA89WL

"It was a horrible game and I've not enjoyed one single minute of it" – Mick McCarthy's initial reaction to #GIBIRL @BoyleSports pic.twitter.com/7yT0pqbvsm

You can shove your yellow card up your arse, ref.