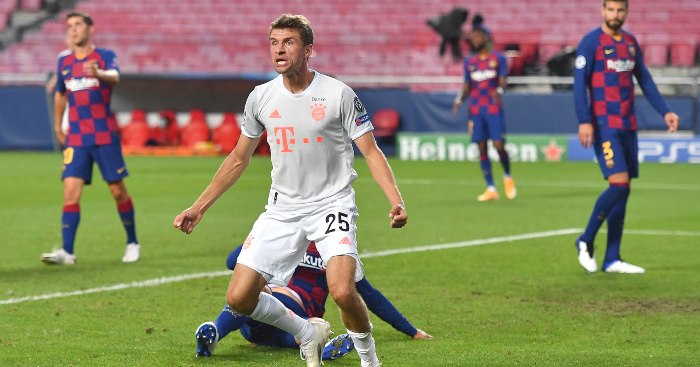 The Champions League knockout stages lived up to the hype this weekend as Bayern Munich thrashed Barcelona and Lyon stunned Manchester City to reach the semi-final stage.

Elsewhere, Jamie Carragher got carried away and Erling Haaland embraced his inner Bob Marley, although he should probably stick to being a striker.

*taps microphone*: Is this thing on?

Neither could quite believe how Raheem Sterling managed to miss an open goal.

.@Carra23 and @MicahRichards were all of us watching that Sterling miss 😮😱 pic.twitter.com/41Ut1YEBp0

Even Carragher enjoyed his reaction.

Those two are a lot of fun together.

Jadon Sancho eliciting an ‘oh you!’ reaction from the fullback pic.twitter.com/B4vVIkomwo

PSG may be rivals with Lyon in Ligue 1, but Mbappe was pretty smug about seeing his fellow French outfit progress.

A man of fine taste.

A match made in heaven 💛 pic.twitter.com/zRf21bdzOw

Matić to Jonny Evans’s wife Helen: “I also want to ask you to say hello to Jonny and thank him for the penalty on the last game. I’ll buy him a coffee when I see him!” [UTD Podcast] from r/reddevils

There’s a lot to enjoy here.

Not sure there are too many better combinations pic.twitter.com/8HNZBdXK8k

READ: Alphonso Davies had already tested that assist out this season – in two parts

The biggest rock star on the planet.

Ref Paul Collier. Favourite story he told me about Ronnie. He came in the day after skipping press conferences and Paul told him it was a £250 fine the next morning. Ronnie handed him £500 cash and Paul said 'There's 500 here Ron' – Ronnie said 'I'm not coming tonight either'.