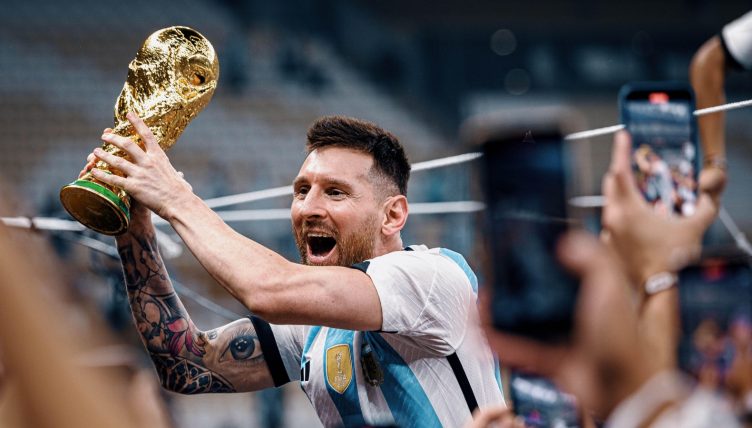 The 2022 World Cup is over and we’re only just starting to recover from the stunning final between Argentina and France – but there was plenty of other stuff to love about the tournament.

This year’s edition of the World Cup saw the most goals ever scored in a single tournament (172), the first African semi-finalist (Morocco) and the footballing world rejoiced as Lionel Messi finally got his hands on the trophy he coveted the most.

We’ve collected together 50 things we loved the most about this year’s World Cup.

The Iran players refused to sing their national anthem before the England game in protest against their barbaric government and we cannot commend their bravery enough.

You can see Laura Woods and Joe Cole grabbing the popcorn while these two scrap it out on live television.

No wonder the Saudis were inspired to beat Argentina after this team talk.

Days into the tournament, Saudi Arabia pulled off one of the World Cup’s biggest ever shocks when they humbled Lionel Messi’s Argentina 2-1.

As pints of mint tea rained down at Boxpark Riyadh, things went up a notch in the countryside… pic.twitter.com/8oeeZI3p79

Denmark were crap at this World Cup but at least they gifted us this hall-of-famer miss.

Is this going to be the miss of the #WorldCup? 😧#BBCWorldCup pic.twitter.com/OsLIB6hlAC

The kind of defending that got Morocco to the semi-finals.

Some things are bigger than football.

The Germany team protest after FIFA banned the OneLove armband at the World Cup 🤐🇩🇪 pic.twitter.com/rHgXRwkaX2

Rudiger underestimating, mocking and disrespecting Japan players. Thinking he can overpower them with his long strides and physicality. And then boom! Japan 2 Argentina 1. Lol pic.twitter.com/rzM4MIVUrF

Footage of Japan fans taking litter out of a bag and leaving it all over the stadium whilst laughing and smiling. Disgraceful scenes. pic.twitter.com/M3MjYyIgNf

Spain were excellent for precisely one match and Gavi scored the pick of their seven goals against Costa Rica.

Kompany was asked if he’d take the newly-available Cristiano Ronaldo at Burnley and he responded with this glorious two-footer.

One slip away from the funniest goal ever scored at a World Cup.

The Brazil striker bought Samba magic to the World Cup.

Every angle of Richarlison's volley for Brazil against Serbia 🙌 #BBCFootball #BBCWorldCup #FIFAWorldCup pic.twitter.com/OrCQEsmHqm

If anything, Hennessey’s education about the Nazis has gone too well.

Wayne Hennessey there, trying to eliminate Iran from… The Royal Rumble? pic.twitter.com/J73gBHqgJB

They had a complete shocker after Wales lost to Iran.

6. When Sky News had this complete nightmare when Wales got knocked out of the World Cup pic.twitter.com/gdgmT8hBDz

Give this man an Oscar.

Luis Enrique on top form again with this on Ferran Torres, who is dating his daughter.
"If he scores and does the baby dummy celebration, I'd sub him off immediately and he wouldn't see a football pitch for some time."pic.twitter.com/FRD9WvYSeg

Surely the most impressive save of this year’s World Cup.

The former @Arsenal keeper makes an impressive double save from a Saudi Arabia penalty ⛔️ pic.twitter.com/ZICLXLBU4h

There have been plenty of fans living up to national stereotypes.

Like these Mexicans, who were caught using ingenious devices to smuggle illicit substances past law enforcement.

Sadly for them, the Qatari police saw right through their booze-filled binoculars. pic.twitter.com/lBpAePyBUA

The best young player of Qatar 2022 putting the seal on Argentina’s tournament-saving win over Mexico.

What on earth was going on here?

Canada’s Atiba Hutchinson stemmed a nosebleed with a tampon. pic.twitter.com/jZIdqXrsjL

A glorious mess of a group stage match, capped by the coolest scoop from Vincent Aboubakar.

Cooler than the other side of the pillow.

Piero Hincapie concedes a penalty after crashing into Ismaila Sarr in the box.

Sarr steps up to take, placing the ball into the bottom corner.#SEN are in the lead & if results stay like this, they will progress to the knockout stages.

Australian limbs at 3:30am… pic.twitter.com/APh9lrInih

One of the best free-kicks seen at any World Cup.

LUIS CHAVEZ THAT IS OUTRAGEOUS 🚀

What a way to score your first goal for Mexico 🔥#BBCFootball #BBCWorldCup pic.twitter.com/eCRMvcdKYz

The conclusion of Group E was the World Cup at its most bonkers.

costa rica vs germany purely for that 2 mins where spain and germany were heading out >>> https://t.co/6OCz0wcUFF

A perfect example of taking defeat with dignity from world football’s biggest sh*thouses.

They chase the officials down the tunnel after being knocked out of the World Cup! #BBCFootball #BBCWorldCup pic.twitter.com/eps9TRwpnk

Xhaka used all his experience to make the simmering cauldron of Serbia-Switzerland boil over.

Scored the goal of his dreams and got sent off straight after; we don’t think Aboubakar would have given a solitary sh*t though.

✅ Get the winner against Brazil in injury time
✅ Get a red card for taking your shirt off to celebrate#ITVFootball | #FIFAWorldCup pic.twitter.com/YAkGaNtKqK

I don't think we can discount the possibility that Van Gaal is in indeed a Punjabi uncle pic.twitter.com/Izz9Ny6WyR

Only a stupendous block from Lisandro Martinez denied the Australian from scoring the best goal of any World Cup.

He doesn’t get the credit he deserves for Manchester United or Argentina.

To be fair to Jack Grealish, ‘rhythm’ is a tricky word to spell under pressure.

The face of England’s World Cup.

Probably the best team goal at the finals – with a celebration to match.

That Richarlison goal was 🤤

(The celebration was pretty good too 😅)

🖥📱💻 Reaction on @BBCSounds and via the @BBCSport app #BBCWorldCup #BBCFootball pic.twitter.com/mg0rE4ZJ8g

Scoring a Panenka to defeat the country of your birth is one thing, celebrating it with this little dance is elite.

It looked like an own goal to us but we’re not about to take this one away from Roy.

This guy knew just how to savour scoring against Brazil.

Cheers to the Croatia fan who took a break from celebrating to vape pic.twitter.com/9qYZGbMF3c

We cannot conceive how Messi saw this pass, let alone executed it.

This strike gave us all goosebumps.

The perfect way to send Pepe and Portugal home.

When Portugal defender Pepe missed a header in the dying moment’s of his side’s defeat to Morocco, Jawad El Yamiq planted a grateful kiss on his shiny bald head. pic.twitter.com/QgfC8Og9co

Moroccan players and their mums

Video of Sofiane Boufal dancing with his mum on pitch ❤️

But it’s not all sunshine for Dave: as part of the repatriation process, he’ll be having his balls chopped off.

💥 It's fireworks in the studio!!

Never mind mate, there’s a queue of clubs willing to pay £100million for your services.

If you’re a coach, you tell Gvardiol that he did very well. Stood his ground, didn’t put his foot in, forced him outside, made sure not to foul. Everything you’re taught to do.

But then, in a few seconds, Lionel Messi destroys your entire belief systempic.twitter.com/u8eO1PNGhJ

A ridiculous goal in the biggest match of them all.

Surely up there with the very best World Cup final goals of all time? Ridiculous stuff from Argentina pic.twitter.com/5RjMnIbUpk

We were all on our feet when this went in.

Even during the best World Cup final ever, McCoist couldn’t resist a dig at the English.

The moment of glory

This video is perfect 🇦🇷 https://t.co/kjsaX6pKug

Arguably the defining moment of the entire World Cup.

And then does this with it. pic.twitter.com/Mt43auNBJX

READ MORE: A totally unscientific ranking of our favourite WC teams from least to most