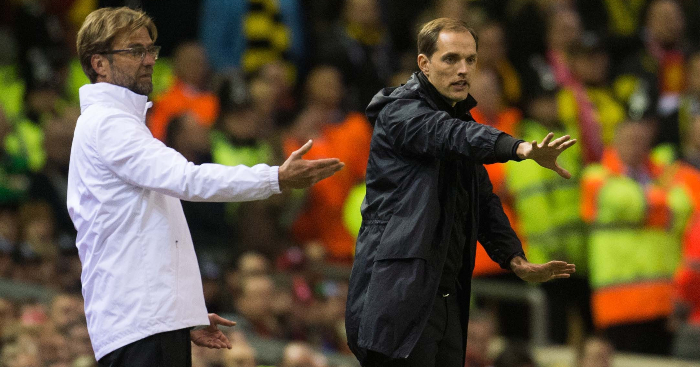 Thomas Tuchel may be new to the Premier League after replacing Frank Lampard as Chelsea boss, but he has experience against some of English football’s biggest teams.

Having taken charge of Borussia Dortmund and PSG in European competition, Tuchel has been in the dugout for some high-stakes encounters with Tottenham, Liverpool and Manchester United.

But how does the German coach’s track record stack up against them? Here’s his record against English opposition broken down – if this gives you confidence in Chelsea’s prospect under Tuchel.

Having succeeded Jurgen Klopp at Dortmund, Tuchel got his first real taste of European competition with the club during the 2015-16 season. After making it through the group stage and past Porto in the round of 32, Tuchel’s side met Mauricio Pochettino’s Tottenham in the round of 16.

Spurs went with a strong line-up, although rested Harry Kane with one eye on securing a first top-four Premier League finish in four years.

Pierre Emerick-Aubameyang, who sensationally scored 39 goals in all competitions that year, bagged twice to put Dortmund two goals ahead at White Hart Lane in the first leg before Son Heung-min got one back.

Once again, the likes of Kane, Mousa Dembele and Kyle Walker were rested for the second leg but couldn’t turn around the 2-1 defeat, losing 3-0 at the Signal Iduna Park. Aubameyang got the opener before a second-half brace from Marco Reus.

Less than six months after being appointed Liverpool manager, fate conspired to give Klopp a reunion with his former club Dortmund, who he was thrilled to see had been left in Tuchel’s capable hands.

Drawn against Klopp’s Reds following the win over Spurs in 2016, it looked as though Dortmund were cruising through to the semi-finals of the Europa League.

Having drawn the first leg 1-1 in Germany, they scored two away goals in the first 10 minutes of the second leg before Liverpool came roaring back, capping off a 4-3 win through Dejan Lovren in injury time to produce the first of many Famous European Nights At Anfield™ under Klopp.

Eighteen months later Tuchel was appointed at PSG, who were drawn in the Champions League group stage alongside Liverpool. An injury-time winner from Roberto Firmino gave Liverpool a 3-2 win at Anfield before they lost the return fixture 2-1 in Paris.

Liverpool went on to win the trophy, while group winners PSG were drawn against Manchester United…

Meeting Manchester United in the round of 16, PSG looked capable of making it deep into the competition when they comfortably beat Ole Gunnar Solskjaer’s side 2-0 in the first leg at Old Trafford.

To add insult to injury, Paul Pogba was dismissed in the closing stages of the defeat and was suspended for the second leg at the Parc Des Princes, which proved one of the great nights in the post-Ferguson era at United.

The dramatic 3-1 away win, capped off by Marcus Rashford’s contentious injury-time penalty, sent PSG out, and may well have earned Solskjaer the job on a permanent basis.

United repeated the trick in the group stage this season, beating Tuchel’s PSG 2-1 in Paris before losing 3-1 at Old Trafford – which ultimately proved pivotal in the Parisiens topping the group and United suffering an early exit.